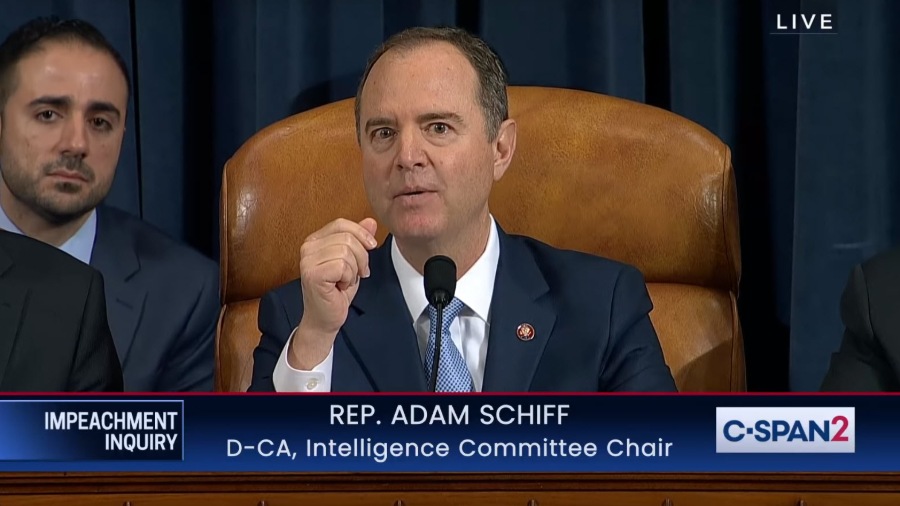 A National Security Council official who has long been a target of Democrats is accusing Rep. Adam Schiff of colluding with Politico to publish what he said is a false story about his contacts with President Donald Trump, according to a lawsuit filed Monday.

Kash Patel, who serves as a senior counterterrorism official on the NSC, is suing the Virginia-based Politico for $25 million for defamation over two articles published in October alleging he served as a back-channel to Trump on Ukraine-related issues.

“Defendants’ reporting was categorically and knowingly false,” Patel stated in the lawsuit, which was filed against Politico and its owner, Robert Allbritton.

“Defendants intentionally employed a scheme or artifice to defame Kash with the intent to undermine the President’s confidence in Kash and to further Schiff’s impeachment inquisition,” Patel stated in the lawsuit, which was first reported by Fox News.

Patel said Politico and its reporter, Natasha Bertrand, “colluded, collaborated and conspired with Schiff to defame” him in articles published Oct. 23 and Oct. 30.

Bertrand’s stories were based on alleged leaks of testimony that two NSC officials, Fiona Hill and Lt. Col. Alexander Vindman, gave in October as part of the Democrat-led Trump impeachment inquiry.

Bertrand reported that Patel was involved in “passing negative information” to Trump about Ukraine on Oct. 23. She reported Oct. 30 that Vindman, who serves as the NSC director on Ukraine, testified that Patel “misrepresented” himself to Trump.

But Patel is vehemently denying having contact with Trump regarding Ukraine.

“At no time prior to October 30, 2019 had Kash ever communicated with the President on any matters involving Ukraine. Kash never supplied any Ukraine ‘materials’ to the President,” the lawsuit stated.

Patel has long been a target of House Democrats, thanks in large part to his previous work for House Intelligence Committee Republicans looking into the origins of the Trump-Russia investigation. Patel led the push to uncover documents related to the Steele dossier, which the FBI used to obtain spy warrants against a Trump campaign adviser.

Patel was also an author of the so-called Nunes memo, which accused the FBI of withholding information about dossier author Christopher Steele in applications to the Foreign Intelligence Surveillance Court.

Transcripts of Hill and Vindman’s testimony, which Democrats released earlier in November, were far less definitive about whether Patel actually met with Trump or provided anyone information about Ukraine.

The staffer then said, “Yeah, so, I mean, we might be reaching out to Kash,” Hill testified.

Hill said she was confused because Ukraine was not one of Patel’s areas of focus at the NSC. She testified that she instructed her staff to keep an eye on Patel. She also raised the issue with Charles Kupperman, who served as deputy national security adviser.

But Hill also testified that she had no direct insight into whether Patel met with Trump or provided him with Ukraine-related documents. She said she did not ever see the material that Patel was supposedly handling.

She said only that she “was led to believe” from her “very brief” interaction with the Executive Secretariat that Patel handled materials that were given to Trump.

Vindman’s claim that Patel “misrepresented” himself to Trump is based solely on information from Hill.

“Outside of what Dr. Hill relayed to me, I had no other basis on which to make that assessment,” he said when asked what he knew about Patel allegedly misrepresenting himself as Ukraine director.

“That was a single I guess data point,” he added.

Schiff’s office did not respond to questions about Patel’s allegations. Politico did not immediately respond to the Daily Caller News Foundation’s request for comment.