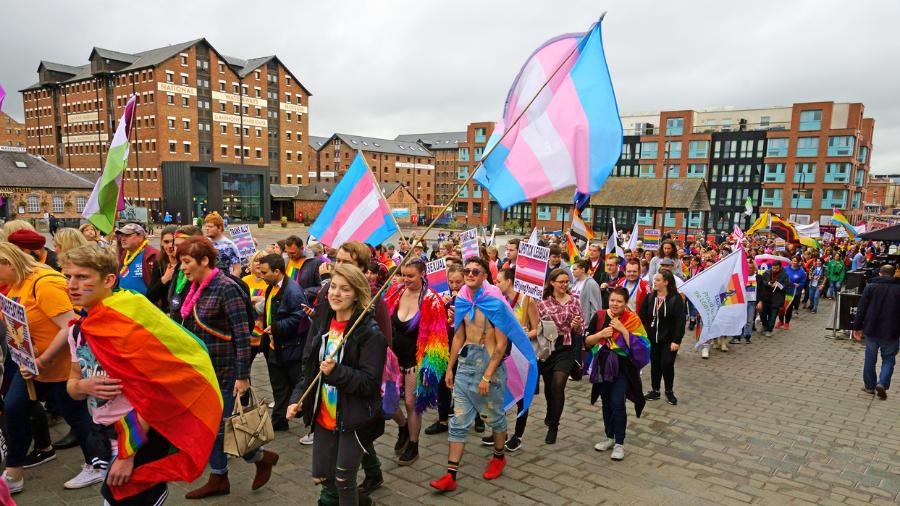 Diversity and inclusion are today’s affirmative action for the LGBTQ community. Corporations are swiftly changing their policies to make sure that no matter what gender you want to be identified as, they find a way to fit you in. We live in a moment where you can throw away whatever organs that determined your birth gender and literally swap with someone else who wants yours. It is almost that easy.

Currently, Proctor and Gamble has joined in the madness and has aligned with the transgender community. They have removed the Venus symbol on their feminine hygiene products because it can be argued that not all that use these particular products identify as female. Well, something is terribly wrong here, because nowhere in normal biological history does a man menstruate.

How is it so easy to convince educated people that men can have a period? Did we all take biology? Better yet, did anyone ever notice a natural-born male have to go through the cycle? Just because a woman says she is a man and changes how she dresses or acts, that just doesn’t make her a male. She is still female and every month until menopause, she is going to get her period. She may want to be called something else, but the truth remains, she is menstruating because she is female. No matter how we restructure her, alter her features and inject her with hormones, her DNA still says she is female.

So why is Proctor and Gamble changing to include “men”? Just like everyone else, they don’t want to offend anyone.

The LGBTQ community and their supporters are swiftly becoming a majority and represent big business. They are money makers. Companies like Proctor and Gamble do not want boycotts. They could stand to lose millions of dollars. They don’t care if it makes sense. It makes money. If all is needed to keep the masses calm is to change a simple emblem, then they will do it because the opposition is minimal. If they want men to have tampons, then give it to them.

The church seems to stand timidly from the sidelines. Only a select few speak against these tragedies. The LGBTQ community has convinced the church that they will be shut down for any actions taken against their lifestyle. The church cowers in fear from laws that are against counseling and other forms of support offered to those that struggle with their identity.

This is a crisis and it’s not diminishing. The influence of the LGBTQ community is growing; spreading into all facets of life including those of our little ones. They have become a very loud voice among our teens offering the alternative lifestyles. While they removed prayer from schools, they have replaced it with books on living as a drag queen or having two mommies as parents. Where is the voice of the redeemed? Where is the power of the Gospel?

There is no opposition, or at the very least, not enough to cause concern. It should never be so easy for companies like Proctor and Gamble to go over to the dark side. They should immediately wonder, “Well what would the Christians think?” Yet, Christian opposition is scarce and not loud enough to be heard. Perhaps because Christians have lost their identity and have not embraced who they are and the greater One on the inside. 1 John 4:4: “Greater is He who is in you than he who is in the world.”

The Church Must Wake Up

Wake up, Church of the living and all-powerful God. Speak up and do not hold back. While we demonstrate love to the LGBTQ community, we should never tolerate their influence over our children or our own lives. We have to truly believe in what we preach and know that it may appear as foolishness to some, but it is the power of salvation. If we are not truly convinced of who we are, then how can we convince others?

It is time to speak up and against everyone that believes it is okay to push their propaganda off on us and destroy the innocence of our children. We have to be that voice that makes sense to the generation coming up behind us when companies like Proctor and Gamble are not making sense. We must be that voice! We must be the mouthpiece that speaks up and declares truth in the midst of all the lies. Wake up, Church, and speak up. We do have a voice and it is more powerful than any other because it is backed by the Spirit of the living God.

Janet founded Janet Boynes Ministries in Maple Grove, Minn., in 2006. She has authored the books: Called Out-A Former Lesbian’s Discovery of Freedom, Arise — The Journey from Fear to Faith, and God and Sexuality — Truth & Relevance Without Compromise. She challenges individuals and the church to reach out with a message of hope and restoration to the homosexual community. Her articles have appeared in Charisma Magazine, Called Magazine, Power for Living, Believer’s Voice of Victory Magazine and many more.