When a Misguided Pastor Makes Threats About a Violent ‘Christian’ Insurrection 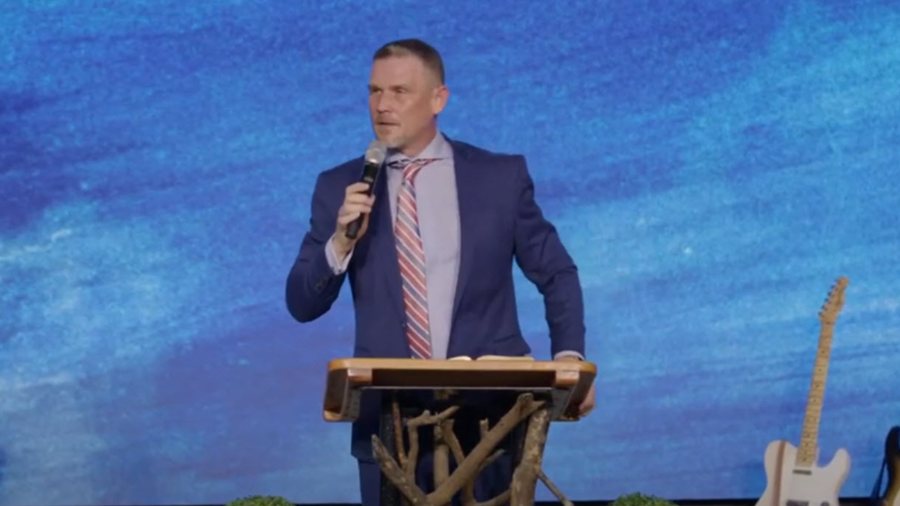 According to his website, Greg Locke is the “Founding and Lead Pastor of Global Vision Bible Church in Mount Juliet, Tennessee, just outside Nashville.” But he is much better known as a controversial internet preacher with a large social media following. And in a recent message, he has crossed a very dangerous line. Every God-fearing Christian should denounce his inflammatory rhetoric, rhetoric which could easily lead to bloodshed.

After the 2020 elections, Pastor Locke “guaranteed” that Joe Biden would not serve a single day in the White House as president, since Trump was the real winner of the elections. But after Biden’s inauguration, rather than recognize his error, Locke simply doubled down, saying he was not a “fake prophet.” It was Biden who was a “fake president.”

He also said (of Biden), “He stole the election. I believe that until the day I die. I don’t give two flips and a wooden nickel what anybody thinks about it. I don’t care what you say about me. He’s a liar, and a robber and a thief and a crook.”

Of course, the real issue here is not whether the election was stolen, which is certainly a weighty subject. The issue is that Pastor Locke guaranteed that Biden would not serve as president for a single day. Sadly, rather than confess his error and ask for forgiveness, Locke railed on his critics.

But it gets much worse.

Pastor Calls Democrats “Demons,” Says They Aren’t Christians and “Can Get Out”

This past Sunday, in a clip that has now received lots of media attention, Locke made clear that you could not possibly vote Democrat and be a Christian.

Christian hate-preacher Greg Locke told the people in his Tennessee tent church today, "You cannot be a Christian and vote Democrat in this nation!"

He later threatened Democrats watching him, "You ain't seen [an] insurrection yet." pic.twitter.com/UDlqYVAEDF

To be sure, the Democratic Party is the party of abortion, to the point that 49 out of 50 Democratic Senators voted in favor of an abortion bill that was so extreme that Sen. Joe Manchin could not vote for it, even though he would have voted for the codification of Roe.

His Rhetoric is Inexcusable, Even Though Some of His Points are Understandable

The Democratic Party is the party of late term abortion, the party of the most inhumane abortion laws, some of them even opening the door to infanticide.

And the Democratic Party also supports radical LGBTQ+ activism to the point of favoring gay and trans rights at the expense of fundamental religious liberties.

In that regard, I can understand some of Pastor Locke’s sentiments, without in any way justifying his extreme rhetoric.

That’s why I so strongly challenged “pro-life evangelicals for Biden.” The term was a flat-out oxymoron. (See here and here and here.)

At the same time, I recognize that not every Democratic candidate is radically pro-abortion and that there are Christian reasons not to vote for some Republican candidates. And as a follower of Jesus, I do not put my trust in a political party, let alone one specific candidate.

Also, for the record, I have heard preachers railing on Christians who voted for Trump, saying that you cannot vote for him and be a true follower of Jesus. And I have met pastors who said in no uncertain terms that for a Christian to vote Republican was to deny their faith.

So, the unhealthy, unhinged, and irresponsible rhetoric goes both ways.

What is much more concerning to me is that Pastor Locke also said in his message that he was sick of hearing about January 6, saying. “Let me tell you something. You ain’t seen an insurrection yet.”

He continued, “You keep on pushing our buttons, you low down, sorry compromisers. You God-hating communists, you’ll find out what an insurrection is because we ain’t playing your garbage. We ain’t playing your mess. My Bible says that the church of the living God is an institution that the gates of hell shall not prevail against it. And the Bible says they will take it by force.”

In the plainest of terms, I denounce these words, calling them out for what they are: absolute, unadulterated garbage.

Those Two Verses Do Not Teach Literal Violence or Insurrection

As for Locke’s citation of Scripture, when Jesus said that the gates of hell shall not prevail against the church (Matthew 16:18), He meant that not even death itself could stop the advance of God’s kingdom. He was saying, “You can persecute us and crush us and even kill us, but the gospel will still prevail.”

This is the exact opposite of what Locke was saying. Talk about a preacher butchering the Bible.

As for Locke’s reference to Matthew 11:12 (“the Bible says they will take it by force”), this has nothing to do with Christians taking up arms against the government in a violent insurrection. God forbid.

Instead, depending on how the Greek verbs are understood, Jesus is either saying that God’s kingdom is under attack, with violent people assaulting His followers. (See Matthew 11:12 in the NIV: “From the days of John the Baptist until now, the kingdom of heaven has been subjected to violence, and violent people have been raiding it.”)

Or, Jesus is saying that, as we are being attacked by the world, we must respond in a spiritually aggressive way, waging war with the weapons of prayer and the Word of God. (See the ESV’s rendering of the verse; see also 2 Corinthians 10:3-5; Ephesians 6:12.)

But either way, without any question whatsoever, Jesus is not calling for us to engage in violent acts against non-believers as an expression of our Christian faith.

To say it once more: God forbid!

Let’s Rebuke His Call for Violence

That’s why it is so reprehensible for a pastor with a large following to engage in this kind of misguided, inflammatory, carnal rhetoric, especially in such divided, fearful, and angry times. The fact that he still has such a large audience means that most of his followers agree with him. That is scary.

What makes this all the more unfortunate is that I have been told Pastor Locke has been rock solid on some biblical and cultural issues in the past. And, his website notes, he holds a Master’s degree in Revival History. He is hardly uneducated or unaware, which only makes him more culpable.

Having said that, without a doubt, I believe our nation is in grave danger, and many of my recent books have addressed that danger directly (see here and here and here for recent examples).

And I have also used the term “revolution” for more than 20 years. But I have endlessly qualified my words: I’m speaking of a non-violent, radical, transformative Jesus revolution that overcomes evil with good and hatred with love. And when writing on the topic, I devote whole chapters to the principles of non-violent resistance and the call to put down our sword and take up our cross.

Pastor Locke is calling for a very different kind of revolution. Let us rebuke that call together in Jesus’ name.

(Pastor Locke, if this article gets to you, I would gladly have a public debate with you on what the Bible says about these issues. Or you are welcome to argue for your point of view on my radio show. Just reach out to me, and we will put the issues on the table, Bibles in hand, for the world to see.)