When a Liberal Plays God 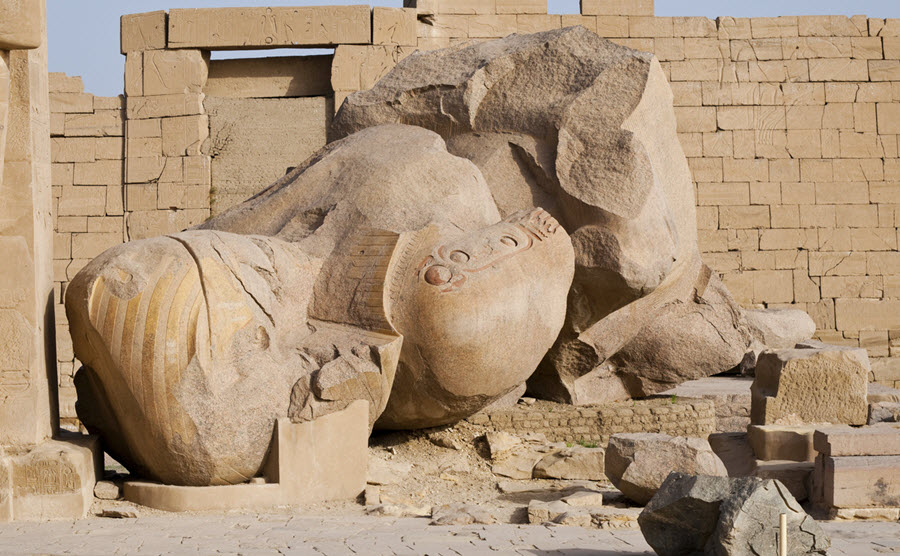 The broken statue of Ozymandias, who thought he was God and said "Look on my works, you mighty, and despair." He was wrong.

By Edward Mechmann Published on September 4, 2020 •

It’s remarkable that in such a short statement Andrew Cuomo managed to give two wrong answers to the question of how God acts in human affairs. The worst thing about that? His wrong answers make someone other than God into God.

Cuomo’s first wrong answer was his belief that human effort alone accomplished everything. His second wrong answer was his belief that he knows what God is doing (or not doing) in this crisis. God intervenes in human affairs, but the way He does it is not always obvious. God typically makes use of indirect causes to advance His will. He uses the actions of people (for good and for ill) as well as natural events. We may not see Him working, but He’s always there.

Not for the governor. He’s a promethean. Pope Benedict once spoke of “a Promethean vision of the human being.” That vision — which is Cuomo’s vision — insists that man “is the absolute author of his own destiny.”

In Greek mythology, the giant Prometheus created humanity from clay. He then stole the fire of the gods (a symbol for knowledge) and gave it to humanity, thus founding civilization. But having fire, men forgot their dependence on the gods. They tried to become like gods themselves. Things went wrong.

The governor should contemplate Psalm 127: “Unless the Lord builds the house, those who build it labor in vain. Unless the Lord watches over the city, the watchman stays awake in vain.” Things will always go wrong without God, especially when we put ourselves in His place. Those who prefer a more secular source might consider Shelley’s poem “Ozymandias.” The poem begins with a traveller telling about a broken statue he saw in the desert. Then:

And on the pedestal, these words appear:
“My name is Ozymandias, King of Kings;
Look on my Works, ye Mighty, and despair!”
Nothing beside remains. Round the decay
Of that colossal Wreck, boundless and bare
The lone and level sands stretch far away.

I suggest we follow the example of the wisest public official we have ever had: Abraham Lincoln. Throughout the Civil War, he contemplated deeply on why it had come about and what it meant for America. He also struggled with the problem of how to discern God’s will in the catastrophic conflict.

His Second Inaugural Address is a profound reflection on the mystery of God’s providence: Both sides of the conflict, he said, “read the same Bible and pray to the same God, and each invokes His aid against the other. … The prayers of both could not be answered. That of neither has been answered fully. The Almighty has His own purposes.”

A little later in the address, he expresses his trust in God’s goodness. Even when we do not get what we want, God is good. “Fondly do we hope, fervently do we pray, that this mighty scourge of war may speedily pass away,” he says.

Yet, if God wills that it continue until all the wealth piled by the bondsman’s two hundred and fifty years of unrequited toil shall be sunk, and until every drop of blood drawn with the lash shall be paid by another drawn with the sword, as was said three thousand years ago, so still it must be said “the judgments of the Lord are true and righteous altogether.

We have no idea why God has allowed this plague to happen. But Lincoln’s advice is to trust in God’s inscrutable wisdom, especially when it doesn’t make sense to us in our suffering. So what should we do?

Lincoln’s answer — and God’s — is that we should devote ourselves to the tasks at hand, trying to do His will as best we can. We do this particularly by serving the weak and vulnerable. And working for peace and justice.

As Lincoln said: “with firmness in the right as God gives us to see the right, let us strive on to finish the work we are in, to bind up the nation’s wounds, to care for him who shall have borne the battle and for his widow and his orphan, to do all which may achieve and cherish a just and lasting peace among ourselves and with all nations.”

The governor should be less like Prometheus and more like Lincoln. Humans can and will do the best we can to find a cure for the disease and a vaccine to prevent it. We should thank God daily for the brilliance of our medical and scientific workers, and the courage of all the caregivers.

The ultimate solution to this crisis is always in God’s hands. He will act in our best interests — according to His purposes and in His own time and way. We may never understand them. We can only be faithful. To put it in the most plain terms, we should follow the advice that is often attributed to St. Ignatius of Loyola: “Pray as though everything depended on God; act as though everything depended on you.”

Edward Mechmann is director of public policy for the Archdiocese of New York. Before coming to the archdiocese, he worked as a state and federal prosecutor. He’s written an introduction to Catholic social teaching called God, Society and the Human Person. The Human Life Review gave him its “great defender of life” award in 2018. His first article for The Stream was Condolences to Pro-Life Democrats. This article is a version of one that appeared on the public policy office’s blog and is used with permission.