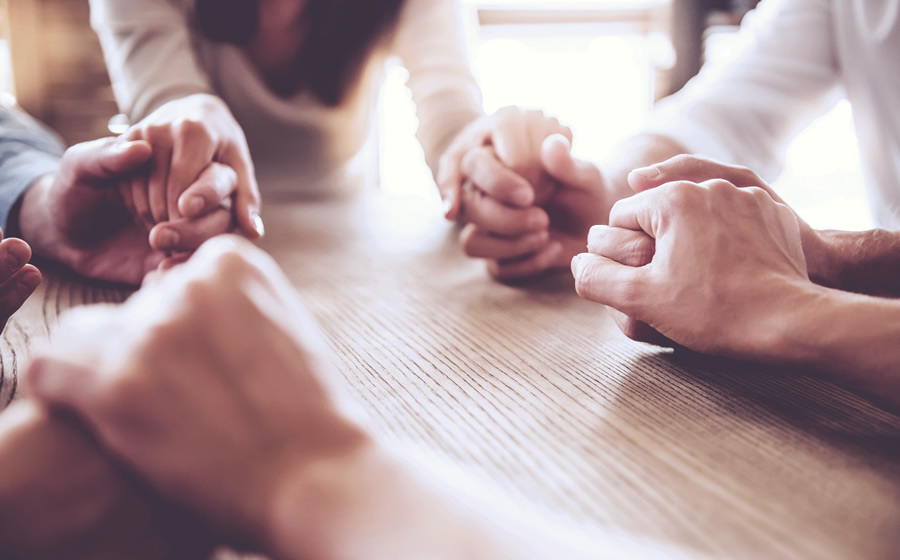 Prayer is hard for me. There are seasons in my life when I’m just not consistent. Life gets busy. Distractions abound. And my prayer life takes a hit.

I don’t think I’m alone. My suspicion is that many professing Christians today struggle with this. Interestingly, I don’t think the early church shared this challenge.

The Bible speaks a lot about prayer. In fact, there are about thirty references to prayer in the book of Acts alone. This is more than any other book in the New Testament.

The book of Acts provides a recorded history of the vital role prayer played in the lives of the disciples, who were completely dependent on God. In fact, prayer precedes almost every major event of the early church. Prayer precedes the filling of Holy Spirit, multiple healings, bold preaching, and comfort for persecuted believers.

If we want improve our prayer life, it might be helpful to look to the early church for direction.

From the inception of the church, the early Christians were devoted to prayer. It was the driving force behind all that they did. Immediately following Jesus’ ascension into Heaven, the eleven disciples returned to the upper room in Jerusalem. Luke records that the first activity of the disciples was to join together “devoting themselves to prayer” (Acts 1:14). From the very beginning of the early church, prayer has been primary.

At the end of Peter’s famous sermon at Pentecost, there is a similar act of devotion to prayer by the new believers. Acts 2:42 records, “And they devoted themselves to the apostles’ teaching and the fellowship, to the breaking of bread and the prayers” (emphasis added). The church had just grown from a little over 100 people to about 3000 people, and their first response was devotion to prayer.

The disciples’ devotion to prayer was both ongoing and central. In Acts 6, the disciples were given the task of appointing seven deacons to serve the widows. It was important for the disciples to delegate this work since they did not want to be distracted from their specific calling. Once again, the disciples announce, “But we will devote ourselves to prayer and to the ministry of the word” (Acts 6:4). It is these devoted prayers that God works through to accomplish His will.

After the first recorded incident of persecution from the council of the high priest, Peter reports to his friends everything that has taken place. Together they pray to God, and “when they had prayed, the place in which they were gathered together was shaken, and they were all filled with the Holy Spirit and continued to speak the word of God with boldness” (Acts 4:31, emphasis added). Therefore, on three separate occasions, the Holy Spirit responds to the prayers of the early disciples.

Second, God uses prayer to lead people to salvation in Christ. The most notable is the conversion of Saul, a persecutor of the church. While Stephen is being martyred for his faith, he prays for his persecutors and cries out, “Lord, do not hold this sin against them” (Acts 7:60). This prayer would have included Saul, who was at the execution. Stephen’s prayer is followed by Saul’s conversion on the road to Damascus in Acts 9.

Third, God answers specific prayers to rescue His disciples. In Acts 12, Luke records that Herod had beheaded James, the brother of John, and was planning to do the same to Peter. While Peter was in prison, “earnest prayer for him was made to God by the church” (Acts 12:5). Incredibly, at the same time the disciples are praying for Peter, an angel of the Lord helps Peter escape from prison. This demonstrates the awesome power of prayer to affect the circumstances of persecuted brothers and sisters in Christ.

Prayer for the early church was a spiritual habit. It was a regular practice. Numerous examples could be given, but let’s just consider two observations.

First, before healing the lame beggar in front of the gate of the temple, Luke says, “Now Peter and John were going up to the temple at the hour of prayer, the ninth hour” (Acts 3:1). Peter and John were intentional about making time for regular prayer. Likewise, when Luke and Paul were in Philippi, they went to “the place of prayer” (Acts 16:16). Again, the early Christians set aside regular time for prayer.

Not only did the disciples commit specific time to prayer, but they also prayed continually. A mark of true discipleship is being in constant communication with God through prayer.

It is also noteworthy that the disciples were not limited to praying in the temple. On one occasion, Luke says, “Peter went up on the housetop about the sixth hour to pray” (Acts 10:9). So, the disciples would commit time to pray no matter where they were in their travels.

Not only did the disciples commit specific time to prayer, but they also prayed continually. A mark of true discipleship is being in constant communication with God through prayer. In his first letter to the church at Thessalonica, Paul commands them to “pray without ceasing…for this is the will of God in Christ Jesus for you” (1 Thess. 5:17-18). And this is what we see in the early church (Acts 6:4).

After considering the prayer life of the early church, there are (at least) three takeaways to help develop a healthier prayer life.

This is in large part due to the lack of dependence on God. When life is comfortable, prayer takes a back seat to everything else. However, this is not the life Jesus has called His disciples to live. In fact, Jesus said, “If anyone would come after me, let him deny himself and take up his cross and follow me. For whoever would save his life will lose it, but whoever loses his life for my sake will find it” (Matt. 16:24–26). When a person chooses to take up their cross and follow Christ, they cannot endure without prayer. They depend on it.

2. Set Aside Time to Pray

One of the challenges for Christians living in the twenty-first century is the constant distraction of the world. These come in a variety of forms, but all serve to pull the believer away from spiritual disciplines. For a Christian to grow in spiritual maturity, they must be intentional about setting aside time to talk to God.

Following the example of the early church, this time needs to be consistent and structured. Unfortunately, prayerlessness is rampant in the church. The pervasiveness of social media, online entertainment, and other technology provides one distraction after another. If contemporary Christians are going to plug into God through prayer, they are going to have to intentionally unplug from their electronic devices.

There are many in the church who have tried praying but did not receive the answer they were looking for. As a result, they have given up praying. However, the testimony of the early church should encourage us to never give up. For example, the disciples were continuously devoted to prayer even when they did not get the answers they wanted. God answered the disciples’ prayer to save Peter out of King Herod’s hands. But James, the brother of John, was not so fortunate.

It is safe to assume that the disciples, including Peter, prayed that God would save James from being killed. When God allowed James to be beheaded by Herod, the disciples could have given up. They could have assumed prayer was a waste of time. But if they had, then Peter might not have been saved.

We can learn a lot about prayer from the early church. If you — like me — want a healthy prayer life, then pray like your life depends on it, set aside time to pray, and don’t give up.