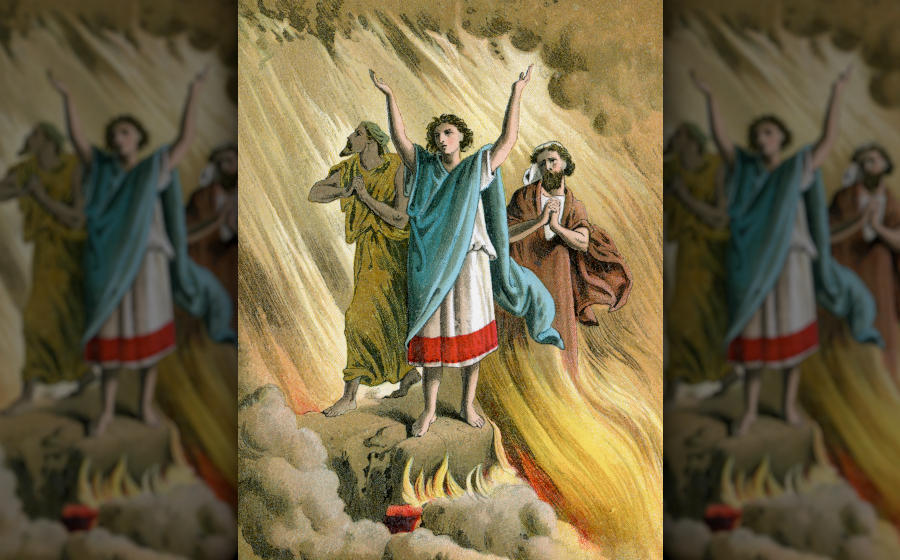 The story of Shadrach, Meshach and Abednego and the fiery furnace teaches about Biblical integrity. Here are three lessons from this Bible story in the book of Daniel.

The Story of Shadrach, Meshach and Abednego Teaches That Biblical Integrity is Uncompromising

Shadrach, Meshach and Abednego were three Jewish young men taken captive when King Nebuchadnezzar of Babylon conquered Jerusalem in 587 B.C. As the brightest among Jewish young men, they were educated and assigned jobs within the Babylonian empire.

But as faithful Jews, they also obeyed the ten commandments given by Moses. And the first was to worship no other gods before the God of Israel.

So when King Nebuchadnezzar commanded everyone in Babylon worship a golden image, they refused. Because it compromised their moral integrity to God’s command.

Today, the Bible is our guide for the Christian faith. It is God’s absolute truth for right living. Of course, we still sin, so perfection isn’t achieved. But Biblical integrity strives to live uncompromisingly according to its moral standards.

The Story of Shadrach, Meshach and Abednego Teaches That Biblical Integrity Stands by Its Word

King Nebuchadnezzar ordered the young men brought to him and gave them a last chance. Bow before the gold image or burn in a fiery furnace. It was the ultimate test in character. Were they willing to die for their commitment to God? Yes. The three young men stood by their word. Why?

Because God stood by His word. They even audaciously claimed God could deliver them from the furnace. But even if not, they wouldn’t worship the idol.

An interesting disclaimer. What does it mean? God can deliver us, but just in case, we won’t comply because we’re religiously stubborn?

No, the point is God’s rewards aren’t always claimed in this life. But always promised in eternity. So they would stand firm. Standing by our word is still God’s expectation for us. One Jesus also consistently taught.

Their integrity was based on the word and character of God. Rather than elevate themselves, they elevated the name of God.

Such impudence made King Nebuchadnezzar really hot. Emotionally speaking that is. How dare they defy him! He ordered the furnace heated up seven times hotter than normal, the three men tied up and thrown in.

But they didn’t burn! In fact, when Nebuchadnezzar called them out of the furnace, not a hair on their head was singed. They didn’t even smell like smoke.

The Story of Shadrach, Meshach and Abednego Teaches That Biblical Integrity Magnifies God

King Nebuchadnezzar was amazed. And perhaps a little fearful. He praised the God of Shadrach, Meshach and Abednego. Decreed that no one in the kingdom speak against their God. And gave the three young men job promotions.

Shadrach, Meshach and Abednego could have strutted their stuff. Proudly proclaimed, “I told you so” or present false humility — a form of pride. But they didn’t.

Instead, their integrity was based on the word and character of God. Rather than elevate themselves, they elevated the name of God.

And that is what Biblical integrity does. Rather than herald your accomplishments or abilities, it proclaims the glory of God. It honors and magnifies His name.

The uncompromising integrity of these three young Jewish men influenced an entire Babylonian nation. And in today’s world of moral ambiguity, the integrity of God’s people influences the culture today.

Chip Tudor is a freelance copywriter, published author, playwright and pastor. He publishes drama at www.chiptudor.com, books on Amazon.com, and articles on his blog.