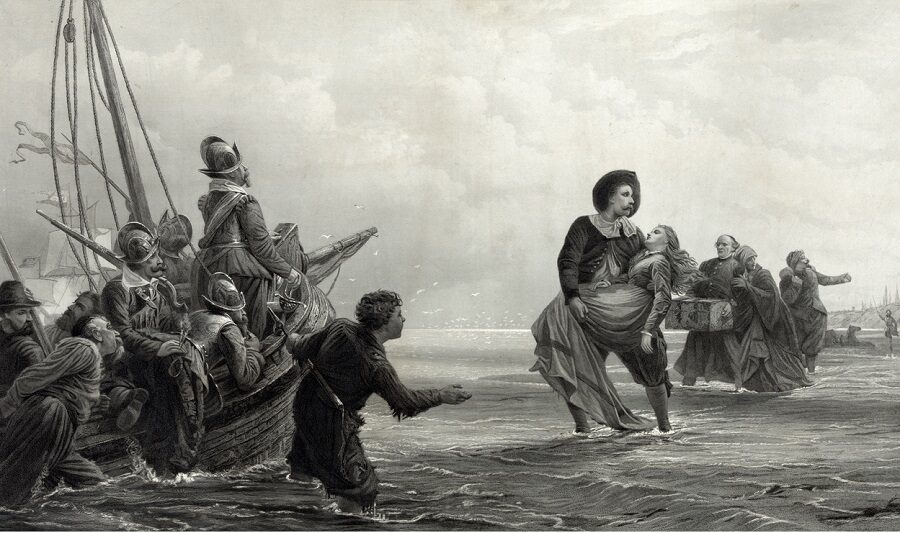 On November 11, 1620, a group of weary travelers ended their 66-day journey across the stormy Atlantic Ocean and arrived at what we now know as Plymouth, Massachusetts. The voyage was difficult, but the travelers’ trials had only begun. The harsh New England winter eventually claimed 45 of the 102 Mayflower passengers.

Just as the Pilgrims were able to give thanks in the face of trials, we can be grateful too since we have so much to be thankful for even in these tough times.

In spite of the great loss and continued struggle, one year after their arrival the Pilgrims gave thanks for what God had given them. This was their prayer:

O Lord our God and heavenly Father, which of Thy unspeakable mercy towards us, hast provided meate and drinke for the nourishment of our weake bodies. Grant us peace to use them reverently, as from Thy hands, with thankful hearts: let Thy blessing rest upon these Thy good creatures, to our comfort and sustentation: and grant we humbly beseech Thee, good Lord, that as we doe hunger and thirst for this food of our bodies, so our soules may earnestly long after the food of eternal life, through Jesus Christ, our Lord and Saviour, Amen.

This prayer is a model for giving thanks. Even though the Pilgrims had lost so much during the first winter and were battered and weary, they understood that everything they had received—every “perfect gift”—had come from the perfect Gift Giver, so they looked to the new harvest and gave thanks. The Pilgrims could have celebrated their own hard work and perseverance, but they didn’t. They celebrated God.

It was the right thing to do. Paul reminds us, “Whatever you do in word or deed, do everything in the name of the Lord Jesus, giving thanks through Him to God the Father” (Col. 3:17).

The Pilgrims were thankful for this harvest because they knew it was a gift from God, but it didn’t stop there. They also sought God’s direction and guidance to use these resources for his glory even while plagued with struggles and uncertainty. They prayed, “Grant us peace to use them reverently, as from Thy hands, with thankful hearts.”

I have learned to be content in whatever circumstances I am. I know how to get along with little, and I also know how to live in prosperity; in any and every circumstance I have learned the secret of being filled and going hungry, both of having abundance and suffering need. I can do all things through Him who strengthens me. (Phil. 4:11–13)

We too seek to do God’s will with the gifts he’s given us, regardless of life’s circumstances. When we turn to God with little or with much and focus on using the gifts we have to build his kingdom, we don’t become distracted by despair or doubt. Instead, we become overwhelmed with thanksgiving.

For the Pilgrims, the harvest meant survival. They knew the true story of reality included more than this physical world, though. They kept their focus on the only things that would sustain them regardless of their circumstance—Jesus, his cross, and Heaven beyond it. They pleaded to God for their souls to never grow satisfied with anything but Christ.

These were a people who embodied Paul’s words: “For I consider that the sufferings of this present time are not worthy to be compared with the glory that is to be revealed to us” (Rom. 8:18).

We Can Give Thanks Too

This last year has been hard for Americans. It was a year of COVID-19 lockdowns, masks, a struggling economy, rioting, looting, topped off by a contentious presidential election. It’s been a year in which many might find it hard to be thankful.

However, just as the Pilgrims were able to give thanks in the face of trials, we can be grateful too since we have so much to be thankful for even in these tough times. We remind ourselves that everything we have is a gift from God to be used for God, and that our hope is not found in the things of this world but in Christ alone.

Jonathan Noyes holds a master’s degree in Christian Apologetics from Biola University, and is now a speaker with Stand to Reason. He also serves on the board of directors for Life Without Limbs and at Beacon Hill Classical Academy, where he teaches discipleship.

Originally published at Stand to Reason. Used with permission.

Six Things to Do When Life Ain’t Perfect