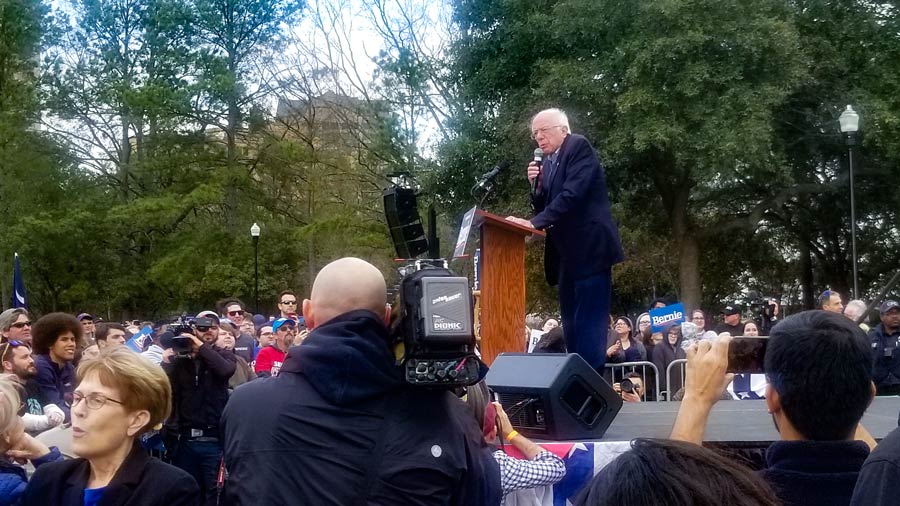 Two Fridays ago I attended a bona fide Bernie rally here in Columbia, South Carolina. Having seen Bernie in person, even though it looks like he’s on the ropes in his fight to become the Democratic nominee, the rally showed the power of his message to shape our political future.

Vice-President Biden has looked so intermittently confused and muddled over the course of his campaign that many have wondered, is he mentally fit for the most challenging job in the world? Well, Sunday night in CNN’s debate he certainly went toe to toe with Senator Sanders and proved that on a good night he looks almost as strong as Bernie, although he faded a bit in the second hour.

What we see happening is that Bernie’s message is so strong within the new Democratic Party that Biden is adopting key points with moderation, such as free public college for everyone whose parents make under $125K. How strong is Bernie and his appeal to voters? Here’s what I heard from Bernie and his dedicated supporters:

What I Saw and Heard

Bernie’s terrific ground game was clearly in evidence at his rally in a large park close to the University of South Carolina and downtown Columbia. Since the Democratic vote in South Carloina is 60% black, all the entertainment and surrogates who spoke before Bernie were African-American. Even so, the crowd only filled up maybe 50% of the area fenced off — a clear signal of Bernie’s difficulty in winning the support of Black voters. 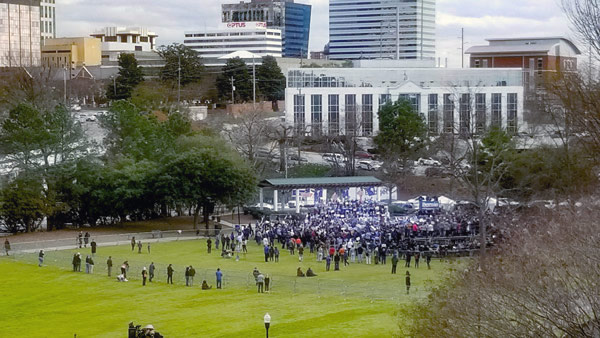 Several friends had cautioned me about going to the afternoon rally alone. The rowdy reputation of the Bernie Bros had preceded the candidate. But the brisk sunny-day crowd could not have been friendlier or more helpful. Upon hearing me tell the security guy wanding us as we entered that I have two artificial knees, a campaign worker quickly asked me if I would like a seat in their ADA (Americans with Disabilities) section. There I found a row of empty chairs very close to the platform. An A+ on being warm and welcoming. 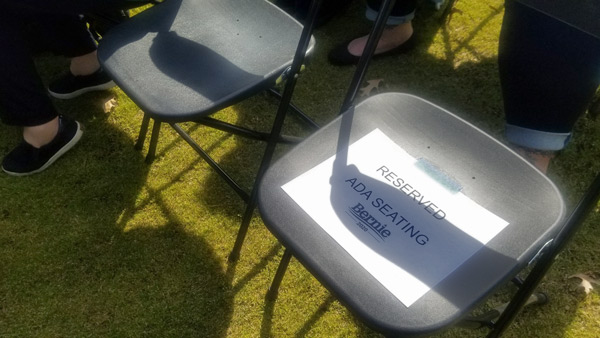 I’d come early to ask people why they had come to the rally. Why they supported an old Jewish guy from Brooklyn in his bid to become president. The first women I talked to replied, “We’re Bernie fans. Have been for years. First heard him in a community center here in Columbia in 2004 or -5. He’s been coming here ever since. Sometimes speaking to 15 or 20 of us about what we need. We need healthcare. Bernie’s been on it from the beginning. What he’s speaking about now is what he’s always been speaking about. He’s consistent. Authentic.”

The “consistent and authentic” label was repeated again and again as I interviewed two men speaking with an Indian accent, a diverse assortment of adults and many university students (who also mentioned tuition debt forgiveness as their main reason for attending). For other younger voters climate change was issue No. 1.

A USC junior said he was raised in a moderate Republican home, but at the University he began to hear many different points of view and stories of disparity and unfairness. His values have changed. He now values social justice far more and he was drawn to Bernie because of his stand on Medicare for all and taking on Wall Street.

A young woman who had lived in D.C. and now directs a gym program in a disadvantaged Columbia neighborhood asked, “Why should all the advantages go to big money and powerful senators?

“Are you here because of the issues or his personality?” I often asked. “Both!” many responded. He truly has endeared himself to many in the crowd. 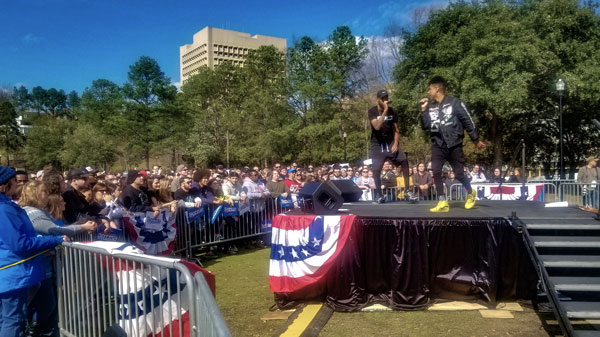 A massive thump-thumping soundtrack gradually drowned out conversations and the rap duo Blackillac from Austin, Texas echoed the concerns I heard the voters expressing:

I’m not exactly fluent in rap lyrics but another song mentioned Trump and repeated “See the shark? Shoot the shark!” long enough for everyone to get the point: Whether it was Trump or Wall Street or a one percenter, some shark out there definitely needed to be shot.

Several surrogates preceded Bernie at the podium — all of a fairly revolutionary bent:

Rep. Ivory Thigpen: “Are you ready to take back our democracy? … There are two types of power — organized money and organized people … we can do it.”

The Black Nationalist mayor of Berkley, California, was followed by the Black Mayor from Jackson, Mississippi, who declared that, “We wanted to be the most radical city on the planet [watch out Berkeley] … we aim for restorative justice … if you’ve come here to help me you’re wasting your time. If your liberation is bound up with mine, join me.”

As he did in 2016, actor Danny Glover was there to support Bernie’s “movement to transform America.” And Rapper Killer Mike told us that “if you are progressive we have to progress like we did 50 years ago. We want progress NOW! … We’re going to progress that old guy right into the White House.”

Bernie Blasts Trump as ‘the Most Dangerous President in History’

As Killer Mike turned around, with no fanfare or accolades or hoopla, Bernie quickly moved up the steps to the mic and began with a solemn, emphatic, “We have to defeat the most dangerous president in American history.”

Before he settled in to his stump speech he took another swipe at Trump for leaving DC and the management of the COVID-19 virus to fly in for a rally in Charleston, “He is here in South Carolina for one reason — to disrupt the Democratic primary — that’s why he’s here. He hopes he can get a little media attention taken away from the Democratic candidates. How petty, how pathetic is that?”

Bernie blasted Trump saying, “Do your job.” “Don’t worry about the Democratic primary because we’re going to beat you.”

How Can Healthcare Be a ‘Human Right’?

Sanders focused the rest of his speech on all the perceived wrongs he wanted to right, beginning with Medicare for all. He insisted that healthcare is a “human right.” The same assertion that no interviewer has ever questioned.

Who has declared that health care is a right? Where did it come from?

With a long history of rheumatoid arthritis I totally empathize with the need for a new system of healthcare. But I’ve wondered how health care can be a right. Have we been endowed by our Creator with an inalienable right to healthcare? Who has declared that health care is a right? Where did it come from? Where is the idea that America should redistribute the wealth of her citizens in our Constitution? Our Declaration?

Bernie’s List of Proposed Handouts Went On and On

I listened for about 25 minutes as, in addition to Medicare for all, Sanders proposed college tuition for all, housing for all, free child care and pre-K for all, embracing the $16 trillion green new deal to stop climate change, eliminating medical debt …

I had to leave early, but it was about a 15 minute walk to my car. As I walked along the lake Bernie proposed legalizing marijuana, welcoming refugees, asylum seekers and those displaced by climate change …

As I climbed the stairs up the hill the loudspeaker still carried his voice promising a prisoners’ bill of rights, an economic bill of rights …

Unlocking my car I could still hear him promising all teachers would be paid $60K a year, promising kids year-round free universal school meals …

I rolled down my windows and Bernie’s voice, now unintelligible, followed me as I made my way out of the parking lot. As I pulled out into the street, best I could tell the list was still going on …

Will Bernie’s Wish List Succeed in Taking Over the Democratic Party?

As I write this I’m remembering how Bernie’s charisma and energy were just as strong as his voice. In last night’s substantive debate it was clear that the power of his message was pulling Biden further into his socialist orbit.

Will Bernie’s list — his revolution — succeed? At least in the Democratic party? If Biden remains as mentally strong and becomes the nominee, how much of Bernie’s list will he have to appropriate to capture the Bernie vote?

Will Bernie’s list — his revolution — succeed? At least in the Democratic party?

We stand on the brink of a socialist Revolution while, as in HG Wells’ War of the Worlds, an unseen, microscopic force is ravaging free market capitalism. Bernie says again and again that he is against authoritarian government. But we have a difficult time imagining how socialism prevails without our government becoming far more authoritarian and our freedom shrinking.

When the virus subsides, will we find ourselves at the end of War of the Worlds, rebuilding a battered but free market and society? Or at the prologue to 1984, with a Big-Brotherish government demanding we redistribute our money, embrace the green new deal, open our borders and whatever else the revolution requires?