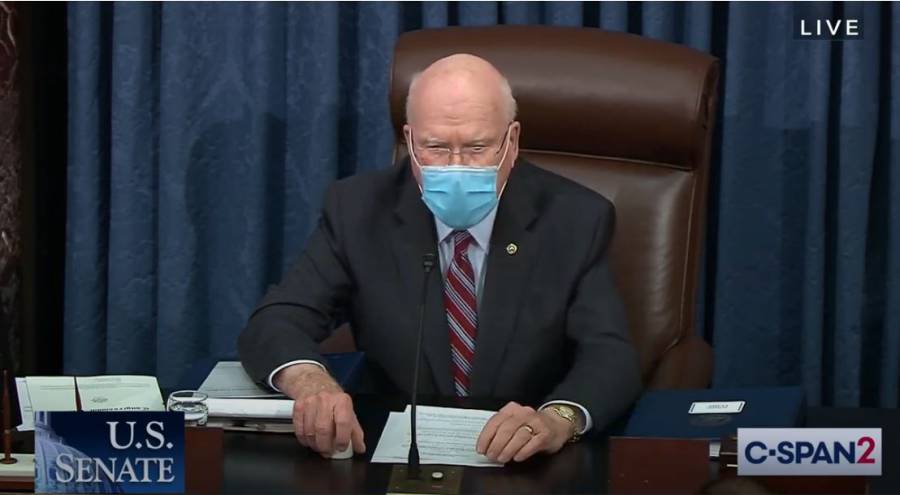 Yes, that’s our Quote Of The Day, from North Dakota Sen. Kevin Cramer.

Next, the “Republican” Hall of Shame:

These are the “Republican” senators who joined all the Democrats to vote “yes” on the question of whether the “trial” of President Trump” is constitutional.

All but Sen. Cassidy had already voted, last month, to hold the “trial.” (Note: I will be placing quotation marks around the word “trial” when it comes to this thing, which is being presided over not by a judge but by a politician who’s already on record that he WILL BE voting to convict and that others should do the same. There’s another term for this: kangaroo court.) Cassidy said later that the Trump team was “disorganized; they did everything they could but to talk about the question at hand.” Townhall has a good analysis .

Attorney Bruce Castor’s argument got low marks from Alan Dershowitz, who tweeted, “I have no idea what he is doing.” I preferred David Shoen’s presentation. Here’s some good analysis at RedState.com .

What Were the Pro-Impeachment Republicans Thinking?

Given that this is just a big fat exercise in political theater, I honestly don’t see why even some perceived oratorical shortcomings should change Sen. Cassidy’s mind. No, I’m thinking it’s more likely there’s been some serious arm-twisting going on behind the scenes.

You’ve probably seen the montage of Democrat leaders such as Maxine Waters urging unrest in ways Trump never approached. If Trump can be impeached and tried over language his political enemies choose to interpret as “incitement” — it doesn’t meet the legal definition — then these folks can be, too, for what they said over the Antifa and BLM “Summer of Love,” and a much better case can be made. (And, hey, they’re still in office.) Will they think about that? No.

Sen. Sasse is said to have presidential aspirations for 2024. It’s hard to imagine someone this tone deaf even being considered for President. Worse, I hate to think that someone with this little regard for the Constitution would be considered as presidential material at all.

In fact, according to The Epoch Times , Sasse is facing growing pressure from the Republican Party in Nebraska.

In Sarpy County, Nebraska’s most populous Republican-majority county, the local Republican Party has now voted to join the GOP in two other Nebraska counties in an earlier effort to condemn Sasse, as reported in the Omaha World-Herald.

The votes of these 6 GOP senators won’t make any difference in the final outcome of Trump’s “trial,” as “conviction” requires a “yea” from 67 senators out of 100. At least 17 Republicans would have to vote to “convict.” (Note: we’re using quotations marks around “convict,” too.)

In the House, Liz Cheney of Wyoming is facing a huge backlash as well. Florida Rep. Matt Gaetz has already traveled to Cheyenne to rally against her. “The truth is that the establishment in both parties have teamed up to screw our fellow Americans for generations,” he said. “Now, in Washington, DC, the private insider club of Joe Biden, Mitch McConnell, Mitt Romney, Nancy Pelosi and Liz Cheney, they want to return our government to its default setting — enriching them, making them more powerful at our expense. But we can stop ‘em, and it starts right here in Wyoming.”

House Democrat impeachment managers, led by Rep. Jamie Raskin of Maryland, argued in the Senate that not trying President Trump for what they allege he did in January, right before he was going to leave office, was creating a “January exception” to the Constitution. “…You can suddenly do [it] in your last few weeks in office without facing any constitutional accountability at all,” he said.

I guess that was enough to change Sen. Cassidy’s mind about voting to go ahead with the “trial,” but all it did was show that he and the others are just willfully obtuse. they know good and well that this is all stagecraft.

In fact, speaking of stagecraft, the Democrats were ready with a highly-produced (likely by some Hollywood friends) 14-minute “movie” that edited Trump’s words and intercut them with violence to make it look as though these were related. Very deceptive and manipulative. Attorney Shoen went on Tuesday’s Hannity to blast this .

Trump attorneys told senators (while Sen. Cassidy was apparently taking a nap), that there’s a way to deal with former Presidents who are alleged to have committed “high crimes and misdemeanors” while in office. You treat them like any other private American citizen alleged to have committed crimes: you get an arrest warrant, go out and arrest them, charge them and put them on trial. It’s a real trial; senators don’t get to make up the rules. The prosecution has to put on a real case with documentation and witnesses. (Note: the House did nothing of the sort in their slapdash impeachment of Trump.)

If the prosecution has no evidence, the judge dismisses the charges. If there is evidence, the judge proceeds to trial, in which a jury (not a bunch of partisan politicians) typically renders the verdict. Then, if found guilty, the accused must pay for their crimes. They might go to jail, or there is punishment in the form of probation, fines, etc. This would put an end to their political careers as well, which, as we all know, is the goal of this Senate “trial.”

Wait, I spoke too soon. If you’re a Democrat, it’s not that much of a deal to be convicted of a crime and come back to be, say, mayor of Washington, DC. Mayor Marion Barry served prison time on a cocaine conviction and was re-elected after being released. I digress.

Democrats Don’t Care About the Constitutional Defects in Their “Case”

Actually, I’m extremely proud of President Trump and his attorneys for the presentation they gave on Tuesday. These attorneys arrived late in the game; recall that another law firm had been intimidated into dropping the case. Of course, it didn’t matter what Trump’s attorneys said; the vote to proceed to the “trial” was pre-ordained .

Sen. Rand Paul had already introduced a point-of-order resolution to preemptively declare the “trial” unconstitutional, but it didn’t get to a vote, as it was immediately tabled by Senate Majority Leader Chuck Schumer. That was on January 26, the same day the Senate voted to to move ahead, 55 to 45.

Tyler O’Neil at PJ Media has some good observations. He’s also done a great job of concisely laying out the arguments Trump’s attorneys are making in his defense. These were included in their brief filed Monday.