We Must Not Forget Iraq’s Christians and Other Religious Minorities 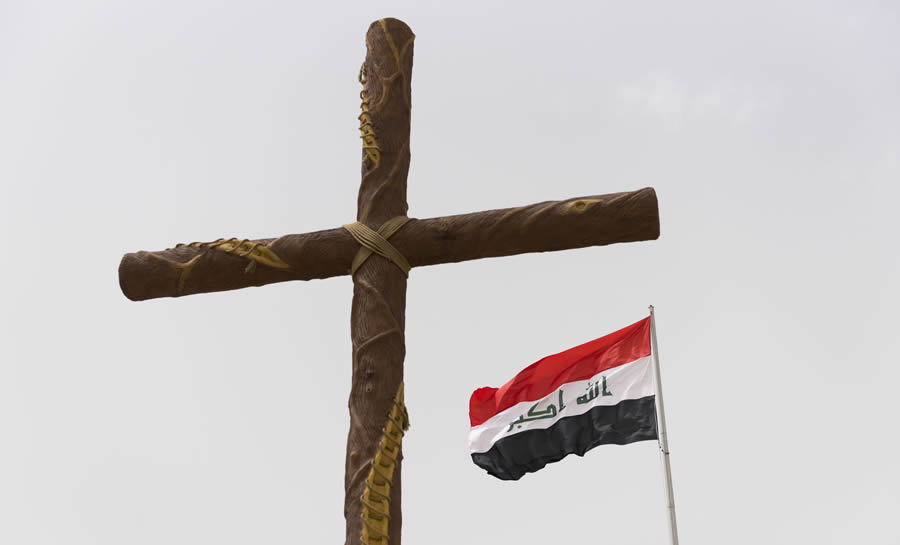 Impeachment is on the brain, and it would seem to the exclusion of everything else. But we had better make room for the Iraqi people. At the start of the month, Chaldean archbishop Bashar Warda of Erbil visited New York and spoke at the United Nations Security Council about the situation in his native Iraq. Warda has been housing and caring for people, primarily Christians, who fled ISIS in Mosul in 2014. He’s been working to secure some semblance of a future for them, including by establishing a Catholic university in his native country.

In his speech on Dec. 3, he said: “At stake is whether Iraq will finally emerge from the trauma of Saddam and the past 16 years to become a legitimate, independent and functioning country, or whether it will become a permanently lawless region, open to proxy wars between other countries and movements, and a servant to the sectarian demands of those outside Iraq.”

Last Chance for the Iraqi People

Warda was hopeful: “If the protest movement is successful in creating a new government, with a new, civil constitution, respecting the diversity of its religions and cultures, one not based in Sharia but instead based upon the fundamental concepts of freedom for all, freedoms enshrined in the Universal Declaration of Human Rights written by this organization where we all sit today, then a time of hope can still exist for the long-suffering Iraqi people. Despite everything, the Iraqi people love their country, and they want it back.”

And the archbishop was also sober. He said that if the protesters were not successful — “if the international community stands by and allows the murder of innocents to continue” — Iraq will probably fall into civil war, scattering millions of young religious minorities. “In the crisis and the genocide of 2014, over 4 million Iraqis, Muslims, Yazidis and Christians fled to the Kurdistan region seeking refuge from the evil of ISIS, but still remained within the country,” Warda said. “In another major conflict, we are likely to see the people flee from Iraq for good. We are indeed at perhaps the last chance for our country.”

His speech was a plea to the international community and especially to the West for support. It was an entreaty not to look away, but also not to recklessly intervene, as the United States has done in the past. Warda will tell you that Christians and other religious minorities in Iraq are not better off because of the fall of Saddam Hussein, evil tyrant though he may have been. Warda is no apologist for Hussein, he simply explains how things have played out. And the archbishop doesn’t explicitly ask the West to do penance, and yet, that doesn’t seem like it would be inappropriate.

Serious attention to his assessment, at the very least, is overdue.

I’m told that on account of his words at the United Nations, protesters have been seen with Archbishop Warda’s photograph on signs in Baghdad’s Tahrir Square.

When I had a long interview with Archbishop Warda in Toronto in 2016, he talked a little bit about the effect of U.S. interventions in Iraq. He was mad. Invading, he said, “was a big mistake,” “but it was a tragedy when [U.S. troops] left.”

Warda stresses the importance of protecting religious freedom, but also how urgent it is to have Christians in Iraq and the wider region. First of all, they belong there — they have been there since about the start of Christianity. That’s only right and just, but also: They bring an example to the region that is absolutely needed. Christians at their best embody the mercy of Jesus from the Gospels — who allowed himself to be crucified out of love, an unprecedented act of hope that changed the course of history and human lives. It is good to have people of hope among you, wherever you are, but it’s especially necessary in the war-torn Middle East.

The Washington Post just ran an alarming series about our last 18 years of armed intervention in Afghanistan. We’ve made things worse in that country, and that’s just the beginning of the story. The news should, among other things, make us take Warda’s words extra seriously. We must consider what we’ve done and stop looking away from the consequences of our policies and the hopes of the people whose lives we’ve so greatly affected.

‘We Believe We Have a Future’

About the ongoing protests in Iraq, Warda says: “The young Christians of Iraq have been participants in these protests every day. They have been there because the protests have given them hope for a future, a future in which they belong as equal and contributing Iraqi citizens.”

Warda points out that though over 400 protesters have been killed, the protesters remain nonviolent. About their goals and the urgency of their cause, he added: “Along with the millions of other marginalized Iraqis, they look now to the international community for your action and support. … We believe we have a future, and we ask you not to turn away from us now.” That should resonate with us. The protesters’ cause is just, and we have a responsibility to support them. Whatever is going on domestically, let’s not look away. It’s our responsibility.