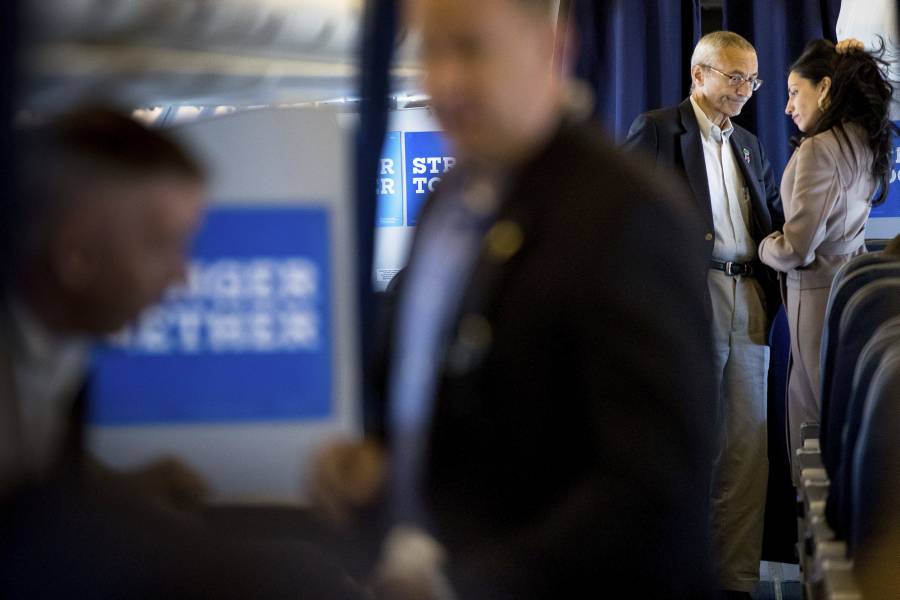 “I just wanted to make sure John Podesta had a heads up that his name will be in a story concerning the White House’s ethics policy, which could run on Monday,” WaPo White House Bureau Chief Juliet Eilperin told then-Obama White House Assistant Press Secretary Frank Benenati in a March 21, 2015, email.

The story appeared March 22, 2015, under the headline, “Obama promised to curb the influence of lobbyists. Has he succeeded?”

White House officials being tipped off in advance by journalists about a story could add new fuel to longstanding charges by critics of what they describe as a too-cozy relationship between Washington politicians and influential reporters.

WikiLeaks made the Eilperin email public Tuesday as one among thousands of emails to and from Podesta, who had left President Barack Obama’s White House in February 2015 to take over as national chairman of former Secretary of State Hillary Clinton’s presidential campaign.

“I don’t mention anything specific about the Wyss contract (since I never got a response from you on it), but I do mention that both [Swiss billionaire and Democratic funder Hans] Wyss and [Silicon Valley investor Tom] Steyer were [Center for American Progress] donors while he headed the organization,” Eilperin told Benenati. Podesta was the founding chairman of CAP, a liberal think tank.

“This is just one line, pretty low down in the piece, but I don’t want him to be surprised since we never discussed it face-to-face. Can you just make sure he gets this note over the weekend,” Eilperin asked Benenati. Benenati is now associate administrator for the Office of Public Affairs at the EPA.

As Eilperin warned, her story did note that Podesta as CAP chief, “before joining the administration to oversee its climate and public lands agenda — had accepted major donations from environmentally minded billionaires Tom Steyer and Hansjorg Wyss before he joined Obama’s staff.”

The information Eilperin did not include in her story – which, as The Daily Caller News Foundation had reported several weeks before was publicly available on Podesta’s White House financial disclosure forms – was the close financial relationship between Podesta and Wyss and their shared interest in Obama administration energy policy.

In a Jan. 29, 2015, story, TheDCNF’s Richard Pollock reported that, “in 2013, John Podesta was paid $87,000 by a shadowy foreign billionaire whose passion is preventing energy exploration on American land.

“Just two years later, Podesta is a member of President Obama’s inner circle, and the driving force inside the White House to block 12 million acres of land in Alaska’s Artic National Wildlife Refuge from oil drilling.

“The circumstances suggest Podesta may have run afoul of Obama’s highly-touted ethics pledge, which requires political appointees to disqualify themselves in matters relating to the interests of a former employer or client.”

In addition to the consulting relationship, Wyss was at the time the second-largest all-time donor to CAP and was a long-time member of its board of directors, indicating the Wyss-Podesta relationship stretched back for years prior to Podesta’s role in shaping Obama energy policies.

It is unclear why Eilperin would not tell readers about Podesta’s financial link to Wyss in a story focused on lobbyists and Obama administration policy, especially given the position Podesta occupied regarding the president’s energy policies.

Podesta would not have been required to register as a lobbyist on the issue, but the financial links to Wyss could be viewed as an apparent conflict of interest.

Eilperin did not respond to request for comment. Kris Coratti, the Post’s Vice President for Communications and Events, defended Eilperin, saying, “the story did mention the financial support John Podesta had received from both Tom Steyer and Hansjorg Wyss while at the Center for American Progress, shortly before joining the White House staff. The email exchange was part of an effort to get further comment from the White House.”

Coratti wouldn’t say if Eilperin declined to comment to TheDCNF or was prevented from doing so by her editors.