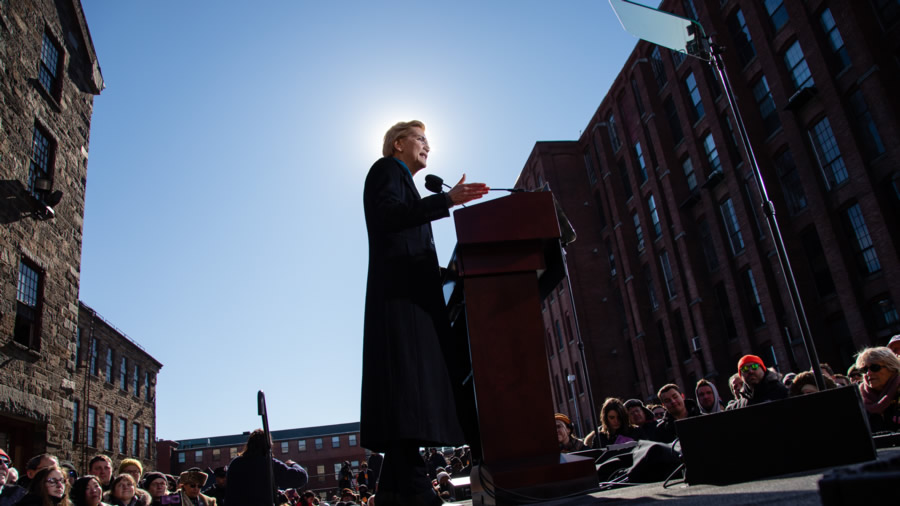 Elizabeth Warren desperately wants to shift attention away from the racial controversies that have ensnared her and other Democrats.

Senator Warren turned heads recently during a campaign stop in Iowa when she said, “By the time we get to 2020, Donald Trump may not even be President,” adding that, “In fact, he may not even be a free person.”

The hot air garnered a lot of attention, but what she said just before that is much more interesting.

“Every day, there’s a racist tweet, a hateful tweet, something really dark and ugly,” Warren said of President Trump. “And what are we, as candidates, as activists, the press, going to do about it? Are we going to let him use those to divide us?”

As someone who literally stole the racial identity of indigenous people, then took the President’s bait by taking a DNA test that showed she has miniscule traces of tribal ancestry, far less than the average white American, the irony behind Warren’s underreported statement is dumbfounding.

For decades, Democrats have been the foremost purveyors of racial identity politics, pandering to racial minority groups for their votes and deference, but now they are the ones with the racism problems.

Warren’s claim to have Native-American heritage, for instance, has become an increasing liability with each effort she makes to defend her appropriation of indigenous culture, especially after she was recently forced to issue an apology for taking that DNA test in an ill-conceived effort to verify her Native American ancestry.

When a Democrat governor is allowed to remain in office even after he admitted that he wore blackface and then inappropriately referred to African slaves as “indentured servants,” it should be a staunch reminder that Democrats don’t play by the very rules that they insist Republicans observe.

Warren thinks Democrats have a responsibility to do something about President Trump’s “dark and ugly” tweets, yet she and her colleagues are more than willing to overlook, or even excuse, “dark and ugly” behavior committed by members of their own party.

While Warren tries to stir up rumors that President Trump will soon be impeached and/or imprisoned — the only feasible path to victory for Democrats in 2020 — her Party is embroiled in the major sexual and racial scandals of our time.

As Democrat politicians are caught red-handed being “racist,” “hateful,” and “dark and ugly,” Warren is hoping to distract the public by pointing the finger at Donald Trump.

Meanwhile, the President has proven to be a huge success, recently reaching his highest approval rating since shortly after he took office, and is leading America to historic levels of economic prosperity.

Before pointing fingers, Warren and her fellow Democrats should get their own house in order and acknowledge that liberals aren’t immune to the racism they claim is lurking in just about every Republican utterance.

Ken Blackwell is a Senior Fellow and Advisor at the Family Research Council in Washington, D.C. He is a former United States Ambassador to the United Nations Human Rights Commission.

Democrats Want Reparations? They Should Look First in the Mirror