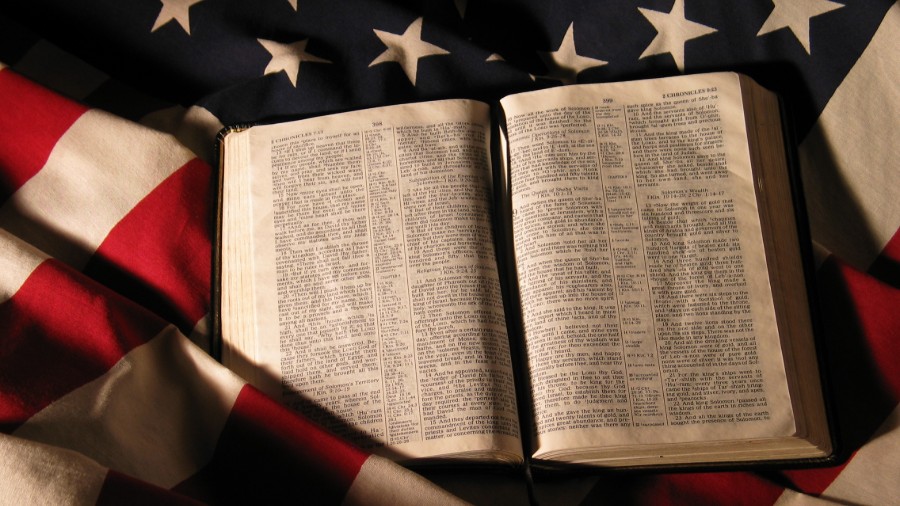 By Jentezen Franklin Published on September 2, 2020 •

There are sincere people on all sides of the political spectrum that love this country dearly and want the best for its citizens. I know this because I’m close friends with Americans who hold entirely different points of view when it comes to what they expect of their government. They often agree on the problems while disagreeing on the solutions.

I truly believe Republicans and Democrats, liberals and conservatives, can peacefully coexist alongside one another. Bipartisanship isn’t only possible; it is required in America.

Our Founders brilliantly created a society that demands robust and diverse debate and requires compromise in order to make progress. It’s what the Bible describes as “iron sharpening iron.”

First Amendment Freedoms Are on the Ballot This November

It’s time for people of faith to draw the proverbial line in the sand.

So at this point my warning to people of faith is pretty simple: speak now, or forever hold your peace.

This November, our First Amendment religious freedoms are literally on the ballot. The free exercise of religion is in jeopardy. Politicians on the left have proven to be more than willing to strip away our religious liberty, and unfortunately many are in denial over this troubling phenomenon.

Abortion and the Hyde Amendment

In Little Sisters of the Poor vs. Pennsylvania, a majority of justices on the U.S. Supreme Court ruled that this Catholic charity could not be forced to provide abortifacient birth control against their convictions. It was widely accepted among most reasonable people in America that targeting nuns was un-American and unjust.

Well, to my astonishment, two of the justices failed to see the basic and fundamental rights of Little Sisters as made clear in the First Amendment.

What’s more, a chorus of folks on the far left responded angrily to the high court’s decision, vowing to ensure other religious charities and the like will eventually be forced to act contrary to their religious convictions.

I am unapologetically anti-abortion. Yet, even many pro-choice Americans oppose using taxpayer funds to provide abortion.

It’s immoral to ask Americans who have a conviction about the horrors of abortion to use their income to pay for a practice that goes against their religious values. And that’s what the Hyde Amendment has protected for nearly two generations.

Vice President Joe Biden held this view for his 40 plus years in Washington, D.C. Yet a reasonable and bipartisan policy has been cast aside by Biden as he had to trade his support of the Hyde Amendment to appease the most radical on the left in his party.

As COVID-19-related guidelines have affected our daily routines, radical leftists have ensured that churches and other religious communities in many states have been asked to abide by a set of rules not required of others. For example, in Nevada, the perspective of that state’s governor, it’s perfectly fine for a casino in Las Vegas to operate at 50% capacity, but churches are forbidden from having more than 50 people.

This is religious discrimination in brazen defiance of our First Amendment protections.

While laws slowly cripple people of faith, lawlessness is celebrated in our city streets.

In Portland, Chicago and countless other cities, officers of the law, protectors of the innocent, are chased away; and the radical left labels it “justice.” Meanwhile, New York City Mayor Bill deBlasio has repeatedly ordered his officers to crack down on Jewish gatherings.

It’s just another example of people of faith getting a very short end of the stick.

It would be one thing if it was only bigoted rhetoric targeting religious institutions — we’re used to that. However, these politicians are demonstrating how willing they are to use the full weight of the law against their political opponents even if they are opposing them because of sincerely-held religious beliefs.

There is no question we are fighting for everything we hold near and dear and that we want our children and grandchildren to experience in this sweet land of liberty.

I don’t know how any Christian can witness all of the examples I’ve cited and not understand what’s at stake here. There is a radical political movement that will not rest until religious institutions conform to their ideology.

To be clear, we’re not asking for special rights. I’m not asking our lawmakers and our judges to tip the scales in our favor. I’m simply asking them to stop tipping them against us.

Our evangelical vote this November will make all the difference.

So at this point my warning to people of faith is pretty simple: speak now, or forever hold your peace.

Nov. 3, 2020 represents the election of a lifetime, as well as a critical moment to speak up. If you don’t, it’s only a matter of time until “speaking up” becomes a thing of the past.

If I were you, I’d vote like the First Amendment itself was on the ballot.

Pastor Jentezen Franklin is the Senior Pastor of Free Chapel, a multi-campus church. Each week his television program “Kingdom Connection” is broadcast on major networks all over the world. A New York Times best-selling author, Jentezen has written nine books including his most recent, Love Like You’ve Never Been Hurt, the groundbreaking Fasting and Right People-Right Place-Right Plan.”Jentezen and his wife Cherise have been married 31 years, have five children and four grandchildren, and make their home in Gainesville, Georgia.