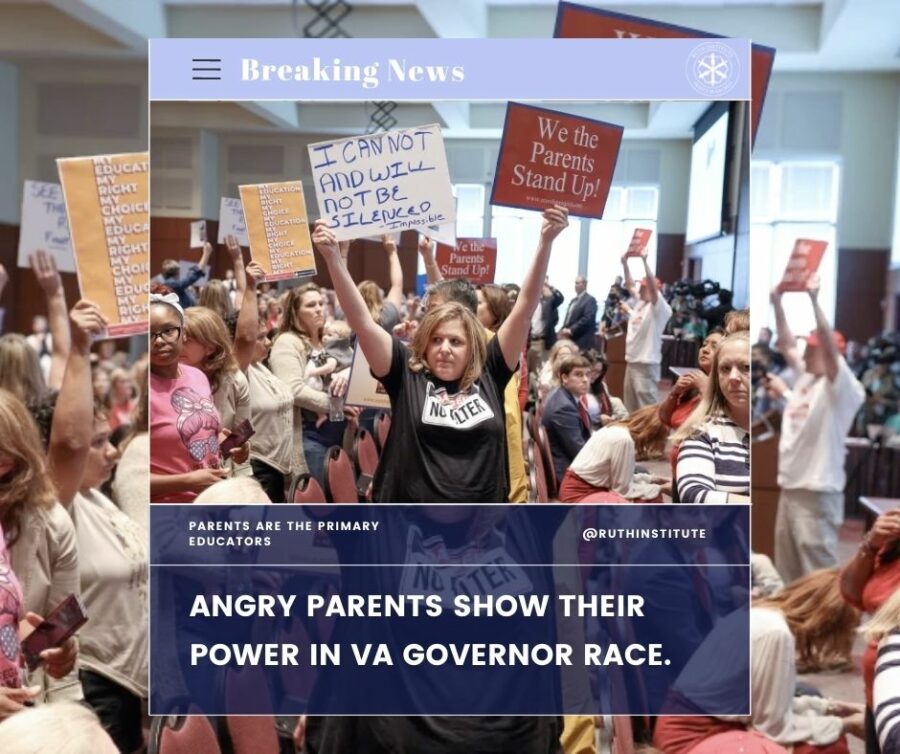 McAuliffe touched off a firestorm when he declared, “I don’t think parents should be telling schools what to teach.” Morse said, “This disdain for families is typical elitist arrogance. By contrast, the Republican winner, Glenn Youngkin, is a strong advocate of parental rights.”

Parents are up in arms over the LGBTQMYNAMEISLEGION agenda in Virginia’s schools, including bathrooms open to anyone. “The Loudoun Country school committee removed a furious father in handcuffs from a meeting that was supposed to be open to the public. Why? Because he charged the school with covering up his daughter’s restroom rape by a boy in a skirt to protect its trans agenda,” Morse said.

Parents are now in open revolt over the ideology of the Sexual Revolution being inflicted on school children. And the rebellion is not confined to Virginia.

In Broward Co., Florida, parents were enraged to find that an elementary school class was taken on a field trip to a local gay bar.

A Kansas school apologized for distributing “Gender Unicorn” worksheets, which asked students, among other intrusive questions, “Do you know your identity, or are you still in identity confusion stage?”

Morse charged, “This reflects LGBTQ dogma that sex is merely ‘assigned at birth’ and hence potentially subject to individual choice.” The school backed off because parents complained.

Through Wyoming Resistance, Campbell Co. parents filed a criminal complaint against the local library board for offering books like Sex is a Funny Word, which urges children 8-11 years old to get comfortable being naked and having their bodies touched.

“Can you say, ‘sexual grooming’?” Morse asked. “Without the efforts of concerned parents and other citizens, you can be sure these books would never have come to the prosecutor’s attention. Books like, Doing It: Let’s Talk about Sex, would still be on the library shelf, available to teens and younger.”

“This Virginia election could be the opening shot in the Sexual Counter-Revolution, a revolution for parental rights and children’s innocence,” Morse said.

Social media companies like TikTok, Snapchat and YouTube are “wildly disingenuous,” said Dr. Jennifer Roback Morse. “Whenever they’re called before Congress, they claim they’re doing their utmost to protect minors from sexual content. But their protestations are meaningless,” Morse said.

At a recent hearing before the Senate Commerce Subcommittee on Consumer Protection, Product Safety and Data Security, executives of the three social media giants were grilled by skeptical senators on both sides of the aisle.

Morse remarked: “It’s rare when Republicans and Democrats can get together on anything. But they agreed about the seeming indifference of High Tech when it comes to protecting minors from corrupting influences.”

When faced with concrete evidence of negligence or wrongdoing, representatives of these companies have a routine response. Michael Beckerman, Head of Public Policy at TikTok America, said, “Sex and drugs are violations of our community standards; they have no place on our site.”

Morse replied: “Big deal. Despite TikTok’s solemn disavowals, the content is there for anyone to see. What is TikTok doing about it? Nothing.”

Calling it “Big Tech’s … moment of reckoning,” Sen. Edward Markey (D. MA) asked the executives if they would support bi-partisan legislation that would give minors more privacy rights and ban ads and targeted video autoplay for children. All three equivocated.

“This hearing proves, as if further proof was necessary, that this is an industry unable or unwilling to police itself,” Morse said.

Alex Peyton’s younger brother, Oliver, was molested by their parish priest. In this horrific yet extremely important Dr. J Show episode, Alex explains the circumstances that led to Oliver’s victimization. He delineates the “grooming” techniques of the predator priest. He shares intimately of how his life was physically, mentally, and spiritually traumatized by his brother’s ordeal.

The fallout from predation is greater than one realizes. The trauma affects more than just the individual victim. Anxiety, obsessive-compulsiveness, panic attacks, constant fear and distrust, not to mention the shaking of one’s faith, are all real and vivid consequences of clergy abuse. Learn what to look for and how to avoid the sexual grooming of yourself and your children or grandchildren by watching this video.

The Most Obvious Lessons From the Virginia Elections