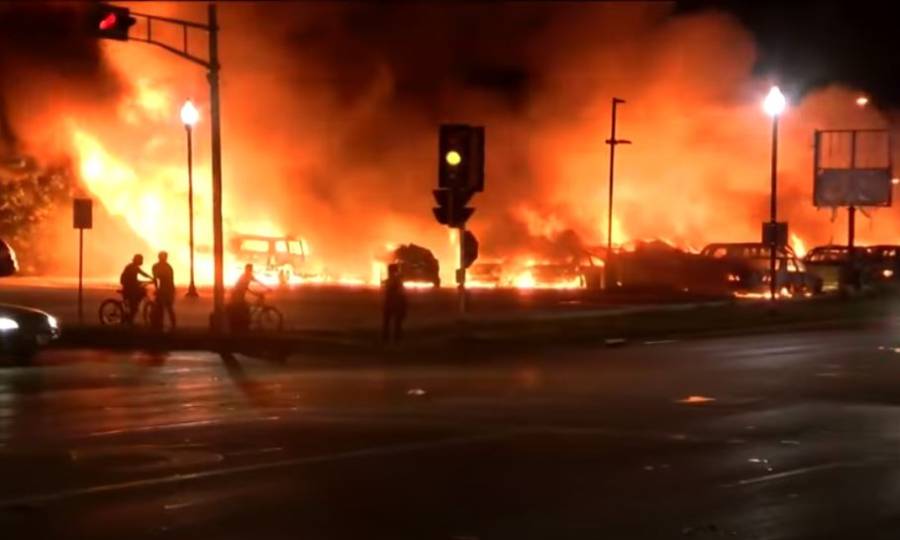 Unrest erupted in Kenosha, Wisconsin overnight after video emerged showing a police officer shooting a black man as he entered his car Sunday evening, according to the Associated Press.

Police used tear gas in an effort to disperse protesters who reportedly threw objects at officers and buildings and set fire to parked cars, the AP reported.

Video shows a man who has been identified as Jacob Blake, according to the AP, walking around the front of his car, followed by officers with their guns drawn. As Blake opens his driver’s side door and leans over his seat, an officer grabs his shirt and opens fire from behind, firing seven shots.

The video shows witnesses jumping and screaming after shots are fired. Blake was taken to a hospital in Milwaukee, where he remains in serious condition, according to a statement from the Kenosha Police Department.

Witnesses said Blake has been attempting to diffuse a dispute between two women before police arrived, according to Kenosha News.

Only hours later officers in riot gear and SWAT vehicles were deployed to counter the hundreds of protesters, the AP reported.

An officer got knocked out with a brick tonight in Kenosha, Wisconsin in response to the shooting of an unarmed Black man pic.twitter.com/oW1cQ3CpMl

Wisconsin Gov. Tony Evers released a statement the same night, according to the AP.

“[W]hile we do not have all of the details yet, what we know for certain is that he is not the first black man or person to have been shot or injured or mercilessly killed at the hands of individuals in law enforcement in our state or our country,” Evers said, the AP reported.

“I have said all along that although we must offer our empathy, equally important is our action. In the coming days, we will demand just that of elected officials in our state who have failed to recognize the racism in our state and our country for far too long,” he said.

The Wisconsin Department of Justice is investigating the shooting, AP reported.

Laquisha Booker, Blake’s partner, said that she and his three kids were in the vehicle’s back seat when the officer opened fire.

“That man just literally grabbed him by his shirt and looked the other way and was just shooting him. With the kids in the back screaming. Screaming,” she told NBC’s Milwaukee affiliate, according to the AP.

Protesters gathered at the Kenosha County Public Safety Building Sunday night, at times clashing with authorities, AP reported. The building was closed Monday due to damage suffered the night before, Kenosha authorities said.