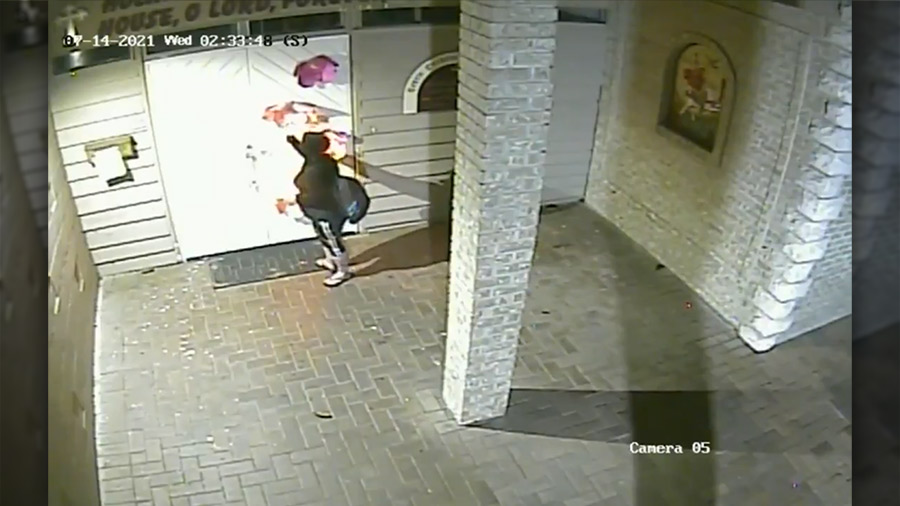 In this screengrab from surveillance video, obtained by CTV Vancouver, a woman is seen lighting the front door of St. George Coptic Orthodox Church on fire.

Video footage shows a woman attempting to light a Canadian church on fire days before the church burned to the ground.

Surrey Royal Canadian Mounted Police said in a press release that St. George Coptic Orthodox Church was destroyed in an early Monday morning fire, the cause of which is still under investigation. The fire is being treated as “suspicious,” particularly in light of video surveillance footage obtained by CTV Vancouver showing a woman attempting to light the church on fire last Wednesday.

Authorities have not established that the incidents are connected. Sergeant Elenore Sturko told the Daily Caller News Foundation Tuesday that the suspect in the July 14 video, described as a “Caucasian woman, 5’7 tall, with a heavy-set build, and dark hair,” has not yet been identified.

#Breaking @SurreyRCMP have confirmed there was an attempted arson at St. George Coptic Orthodox last Wednesday. Officials say it’s too early to confirm if today’s fire was also arson or if the two fires are connected. They’re still looking for this suspect. @CTVVancouver https://t.co/bFcFHupbOL pic.twitter.com/8WJSOGe9kD

The church, attended by more than 380 families, also served as a daycare to 65 children, CTV reported.

“We will not be deterred and we will rebuild,” said Bishop Mina of the Coptic Orthodox Diocese of Mississauga, Vancouver and Western Canada, the Vancouver Sun reported.

“The timing of this fire … raises many questions about what the authorities did to protect our church, especially considering the attempt on the same church this past Wednesday,” he added, according to the Vancouver Sun.

The Royal Mounted Canadian Police told the DCNF Tuesday that though it is investigating the crimes against churches, it does not have statistics on how many churches have been vandalized or burned.

“The RCMP is tracking/investigating these crimes where we are the police of jurisdiction. We don’t have a mandate to collect/track statistics for crimes investigated by other police departments,” RCMP spokesperson Robin Percival told the DCNF.

At least 48 Christian churches in Canada have either been vandalized, desecrated, or burned down since unmarked graves were uncovered near residential schools for indigenous children, according to one estimate by the Canadian publication True North.

Torrence wrote the unmarked graves are “confirmations” of a sad history Canadians have always known, rather than “discoveries.”

Canada’s Truth and Reconciliation report, released in 2015, found that thousands of children died from disease in the overcrowded schools and that lack of supervision allowed for abuse and neglect.

“This is not a mass gravesite,” Saskatchewan First Nation Chief Cadmus Delorm said June 24, regarding burials found near a former Indian residential school. “These are unmarked graves.”

Christians face persecution abroad, flee here, then see their church burned down, after rep from local civil liberties org says "burn it all down" and PM's former advisor says church burnings "may be understandable". What is happening to Canada.https://t.co/6owPvoq0If #cdnpoli

“The finds were shocking but not surprising,” wrote Torrence. “As a schoolgirl in Canada, I learned the ugly history of the country’s forced assimilation policy. Over the course of a century, 150,000 native children were torn from their families — by force, if necessary — and sent to get an English- (or French-) language education in government-funded schools run mainly by the Catholic Church.”

Torrence wrote that most of the clergy in charge were “well-meaning,” but that some “took advantage of their positions to inflict abuse.”

“The idea was to turn poverty-stricken children into productive, even prosperous, members of mainstream Canadian society — and, from the church’s perspective, to save their souls,” she added. “Canada’s Truth and Reconciliation Commission concluded in 2015 that at least 3,200 students died, later revising that figure to 4,100. The No. 1 cause of death was tuberculosis; influenza hit hard, too. Far from home, children were often buried on site, their graves marked with wooden crosses, most of which deteriorated and disappeared.”