The Very Liberal Views of the Leading DNC Chairman Contender 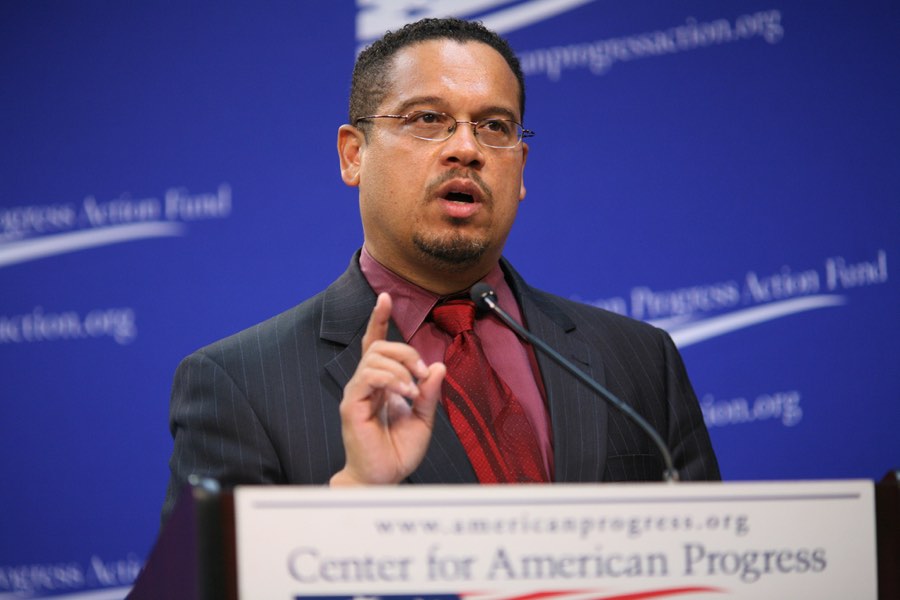 The leading candidate to be the next chairman of the Democratic National Committee, Rep. Keith Ellison, D-Minn., has said he wants the Democratic Party to come out against the Second Amendment, compared the 9/11 attacks to the Nazi Reichstag fire, and was affiliated with the controversial Louis Farrakhan’s Nation of Islam.

Ellison, the co-chairman of the Congressional Progressive Caucus and supporter of Vermont Sen. Bernie Sanders during the Democratic presidential primaries, once said eventual nominee Hillary Clinton would have to prove she’s not a Republican to get his support.

Ellison has been member of Congress since 2007, and has supported other measures that could be unpopular with moderate voters, but are the norm for progressives. Ellison has advocated a single-payer health care system, a carbon tax, hiking taxes for high earners, and cutting the defense budget.

With Republicans holding the White House along with majorities in the House and Senate, the Democratic Party chairman will be a more prominent public face for the party for at least the next two years.

“We’re not broke. There’s plenty of money, it’s just the government doesn’t have it,” @keithellison says.

Here are a few things to know about the leading contender for the DNC chairmanship.

‘Sure Wish They Would’ Be Against the Second Amendment

When appearing on “Real Time with Bill Maher” in March 2014, Maher asked Ellison, “Why doesn’t your party come out against the Second Amendment? It’s the problem.”

Maher pressed, “Really? Because I never hear anybody in the Democratic Party say that. But they say, ‘I am also a strong supporter.’”

Ellison said, “You have got to check out the Progressive Caucus. We have come out very strong for commonsense gun safety rules.”

“What it means is that if you want to have grandpa’s shotgun, have it, but get rid of those crazy military-style assault weapons,” Ellison said.

Maher said, “It’s not going to change anything.”

Ellison’s office did not provide a formal response for this story, but a prominent Democratic surrogate close to Ellison defended his stance on gun control.

“Keith has called for the reinstatement of the assault weapons ban, a law that prevented dangerous weapons from falling into the hands of violent criminals,” the Ellison associate said.

“We can avoid national tragedies by closing gun show loopholes, banning military-style assault weapons, and fully supporting the implementation of the National Instant Criminal Background Check System,” he added. “A strong national background check system will ensure that violent individuals, domestic abusers, murderers, or the criminally insane are not able to buy guns. Keith also believes in limiting the amount of deadly ammunition that guns can hold in a single magazine because there is no justifiable civilian purpose for firing dozens of rounds without stopping.”

Past Ties to Farrakhan

Going back to his time in law school at the University of Minnesota, Ellison defended the Nation of Islam and its controversial leader Louis Farrakhan.

As a third-year law students at the University of Minnesota Law School in 1989-90, Ellison reportedly wrote for the student newspaper, The Minnesota Daily, using the name Keith Hakim, where he defended Farrakhan and the Nation of Islam. He further wrote about reparations for slavery and demand a separate homeland for African-Americans, The Washington Post reported when Ellison was running for the office.

In 1995, he reportedly backed up the Nation of Islam line in organizing a march at the U.S. attorney’s office in Minneapolis to accuse the FBI of conspiring to murder Farrakhan, The Weekly Standard reported.

Ellison first ran for public office in 1998, winning the Democratic nomination for state representative under the name Keith Ellison-Muhammad.

Because of Farrakhan’s anti-Semitic statements, Ellison sought to explain his association when he first ran for Congress in 2006. During the Democratic primary, he wrote a letter to the local chapter of the Jewish Community Relations Council that stated his involvement with the Nation of Islam was only 18 months and surrounded the Million Man March of 1995. He said he wasn’t familiar with the Nation of Islam’s anti-Semitic views.

Later that year, he said that he parted ways with the group when “it became clear to me that their message of empowerment intertwined with more negative messages.”

“He has strongly condemned the Nation of Islam and other groups that promote anti-Semitism, intolerance, and bigotry, hosting several briefings and panels about confronting anti-Semitism and Holocaust denial, voting to strengthen anti-hate crime legislation, and standing with Jewish government officials against anti-Semitism,” the source close to Ellison said.

9/11 and the Reichstag Fire

The conservative group America Rising PAC showcased a video last week from Ellison delivering a 2007 speech where he said that the 9/11 terrorist attacks was comparable to the Reichstag fire in Germany that helped bring Adolf Hitler to power.

“Remember 9/11. You would never have all this discrimination against religious minorities but for 9/11,” Ellison said. “We had it, but we don’t have it to the degree we have it now. 9/11 is this juggernaut you get in American history. It’s almost like the Reichstag fire. It reminds me of that. You know what I’m talking about?”

Someone in the audience asked, “Who benefited from 9/11?” Ellison responded, “Well, you and I both know. But the thing is, you know, after Reichstag was burned, they blamed the communists for it and then put the leader of that country into a position where basically he could do whatever he wanted.”

This year, Ellison was on the platform committee for the Democratic National Convention, and expressed disappointment the platform did not include stiffer language against Israel’s “occupation” of Palestinian territory.

Ellison said he was regretful of the “saber rattling” platform language against Iran.

“I think we could have had a two-state solution and the U.S. aspiration to have peace and security for both Israelis and Palestinians. I thought [the party platform] was a little bit weak on that,” Ellison told Democracy Now on July 11. “It is important that the United States state that we don’t think the occupation of what will be the Palestinian state should continue. I don’t know why we are in fear of using the ‘O’ word. Ariel Sharon used it. The U.N. uses it. … There is a humanitarian crisis going on in Gaza.”

Ellison was also one of 54 lawmakers who signed a letter to President Barack Obama calling for an end to the blockade of Hamas-controlled Gaza.

But Ellison’s associate said the congressman has a strong record helping to improve Israel’s security. That includes voting for sanctions on Iran in the past week, the close Ellison associate said.

“Keith has supported and voted for more than $27 billion in bilateral aid and assistance to Israel,” the Ellison associate said. “His support for a two-state solution and advocacy for U.S. leadership to help resolve the Israeli-Palestinian conflict are supported by the majority of American Jews.”

Ellison told Fox News host Stuart Varney in February 2013 that a 63 percent tax rate would be fair for the wealthy.

In calling for a transaction tax at a 2013 roundtable, Ellison explained the government isn’t broke, it just hasn’t gathered enough money from private citizens.

Ellison sponsored the Congressional Progressive Caucus fiscal year 2016 budget proposal that would include a tax increase of $4.39 trillion over 10 years and called for a “worldwide taxation system” to bring in $706 billion in new revenue, according to the Committee for a Responsible Federal Budget analysis.

What Ellison Thought of the Last Democratic Nominee

In May 2015, he told Politico of Clinton: “Ultimately, she simply needs to … not [be] a Republican for me to endorse her. I will support the Democratic nominee, there is no question about that. The real question is: What is going to make me get excited? I want to hear her talking about the most pressing issue in America today, which is the concentration of wealth at the top.”

What Concerns Democrats About Ellison?

Dean, a former DNC chairman from 2005 through 2009, said an elected officeholder shouldn’t have the chairmanship.

“Look, I like Keith Ellison a lot. He’s a very good guy. There’s one problem. You cannot do this job and sit in a political office at the same time. It’s not possible,” Dean told MSNBC.

Rep. Debbie Wasserman Schultz, D-Fla., who resigned earlier this year amid controversy, had a waiver from the rule in the DNC charter that states, the “National Chairperson shall serve full-time,” Politico reported.

When the Left Eats Its Own