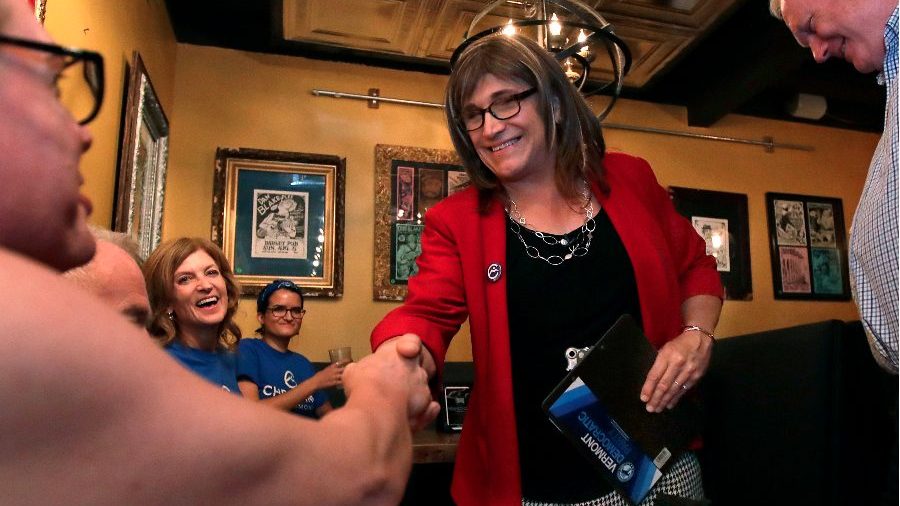 The nation’s first transgender candidate for a major political party won Tuesday’s Democratic primary for the Vermont gubernatorial race and will face off against incumbent GOP Gov. Phil Scott in November’s general election.

Christine Hallquist edged out a victory over a field of four Democrats, taking 48 percent of the vote. Scott defeated one other Republican to win 67 percent of the GOP’s vote.

Scott had been considered one of the most popular governors in the country until his approval rating plummeted from 65 percent in the first quarter of 2018 to only 5 percent. The decline is attributed to his signing into law various strict gun control measures such as a ban on bump stocks, increasing the legal age for purchasing a firearm to 21, requiring background checks on private gun transfers and banning the sale of magazines holding more than 10 rounds.

Scott beat out Keith Stern, the owner of Stern’s Quality Produce, a local vegetable shop. During his campaign, Stern criticized Scott for not decreasing government spending and for caving to anti-gun activists.

Hallquist is the former CEO of Vermont Electric Co-Operative and was born a male, yet identifies as a woman. He is the country’s first transgender gubernatorial candidate for a major political party and, if he wins the governorship, will become the first transgender person elected to a statewide position in Vermont.

Hallquist’s gender has become the spotlight of his campaign, despite focusing primarily on climate change and rural development. He has also called for statewide single-payer healthcare and universal internet.

Hallquist is backed by the LGBTQ Victory Fund and has raised roughly $132,000 for his campaign.

Ethan Sonneborn, a 14-year-old progressive, also ran in the Democratic primary. Despite not being old enough to vote, Vermont allows any resident who has lived in the state for at least four years the ability to run for office. The other two candidates included an environmentalist and a self-described “low-income single mom.”

A Vermont PBS poll in July showed an alarming lack of name recognition among all the democratic candidates. Hallquist was the most recognized with almost 60 percent of respondents saying they had never heard of him.

None of the Democratic candidates have previously held statewide elected office.

Vermont is one of the states that allows same-day registration, which means last minute or undecided voters have the ability to participate in the election up until polls close.

Trump is Not My Savior: James Robison Talks to Dr. Michael Brown About His New Book