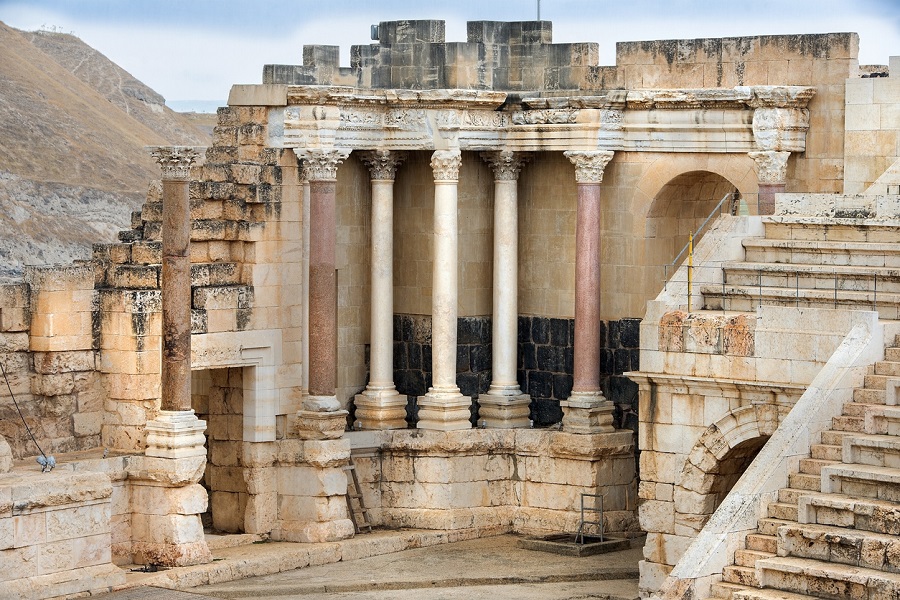 The ruins of Beit She'an, also known as Scythopolis, an important city in the history of Israel located at the junction of the Jordan River Valley and the Jezreel Valley

Note: This is Part 2 in the series, Understanding Israel’s War.

Let’s quickly survey the four-thousand-year-old story of the nation of Israel.

From Nation to Being Ruled by Five Great Empires

During the Old Testament period, the descendants of Abraham went from being…

Then Israel was overrun and controlled by five major empires:

The few remaining Jewish community members moved to northern towns in the Galilee.

Now we pick up the story in New Testament times.

Israel Under Siege During Time of Jesus and New Testament Era

At the time of the crucifixion of Christ in 33AD, Rome controlled Israel. In 70AD, the Romans destroyed the Jewish temple as noted above. When Emperor Hadrian later banned Jewish freedom and religious practices, the Jews revolted but Hadrian crushed the revolt and killed the Jewish leaders in 136AD, also noted above, which would be after the New Testament era which ends in approximately 100AD.

He also destroyed and plowed under the Temple Mount (the traditional center of Jewish life) and Jews were banished from Jerusalem. Hadrian then drew up a plan to build a new city on the ruins of Jerusalem, making it a center of pagan worship.

The Name Change that Explains It All

To further humiliate the Jews, he sought to rename their nation. After learning that the Philistines were the oldest and fiercest enemy of the Jews, he renamed the country Palestina. It is critical that you know this fact: the name Palestine was to honor the Philistines, the most-hated enemy of the Jews. For the next 500 years, Jews were allowed in Jerusalem only one day each year: the anniversary of the burning of the temple.

Let’s be clear that Palestine has no relation to the current Palestinians; the Palestinians are not the descendants of the ancient Philistine inhabitants of the land of Judea. The Philistines of the Bible, who arrived in the land about the same time as the Israelites, were from Greece and were not Arabic, and they were gone from the Holy Land over a millennia ago. The current Arabic Palestinians have no relation to the Philistines, and no ancient claim to the land.

Early in the fourth century, Emperor Constantine claimed a conversion to Christianity (although his subsequent practices made any such conversion seem unlikely—it seemed to be a “conversion” in name only). Under Constantine, Jerusalem began to regain lost prestige.

In the fifth and sixth centuries, the Roman Empire began to weaken. In 614AD, the Persians took control of Jerusalem and destroyed many of its churches, but in 628AD the Romans (at that time calling themselves Christians) recaptured the city. And from then until the 1900s was a flurry of one conquering army after another.

This is where the story of Israel’s rebirth begins.

Israel Belongs to the Muslims?

By the way, claims that Jerusalem belongs to the Muslims are bogus, considering not only that Mohammed never visited Jerusalem but also that Islam arrived there:

(These are important dates to remember when Muslims lay claim to the land and city.)

Interest from the West

By the 1800s (the latter part of Turkish Muslim rule), Western interest and involvement in Palestine was growing. In the 1840s, an American naval expedition explored down the Jordan River from the Sea of Galilee to the Dead Sea. Americans such as Mark Twain traveled the region, and President Abraham Lincoln expressed his desire to visit Palestine. Consular offices were established in Jerusalem, and visits occurred from celebrated American officials such as diplomat Lew Wallace (the author of Ben Hur).

British, French, and Germans became more plentiful in the region, and among several European nations the maneuvering for position in Palestine grew more intense. In fact, in England, the Palestine Exploration Fund was established which sponsored several surveys of Palestine in attempts to lay British claim to as much of the Middle East as possible and to counteract the efforts of the French to do the same.

The 1900s: The Beginning of Zionism (Jews coming back to Israel)

By the middle of the century, Jews comprised half the population of Jerusalem, and there was open support growing for the restoration of Palestine to the Jews. (In America, Founding Fathers such as John Adams and John Quincy Adams had long before expressed their support for the reestablishment of Palestine as an independent Jewish nation as had early American Jewish leader Mordecai Noah. From 1860 to 1870, the concept of Zionism began to take shape.

Recall that Zionism simply means the right of the Jews to return to their ancient Biblical homeland and reestablish Israel as an independent self-governing nation, with the right to defend itself. A Christian Zionist is a Christian who believes the same — that Jews have this right.