‘Under God’ is Under Attack … Again 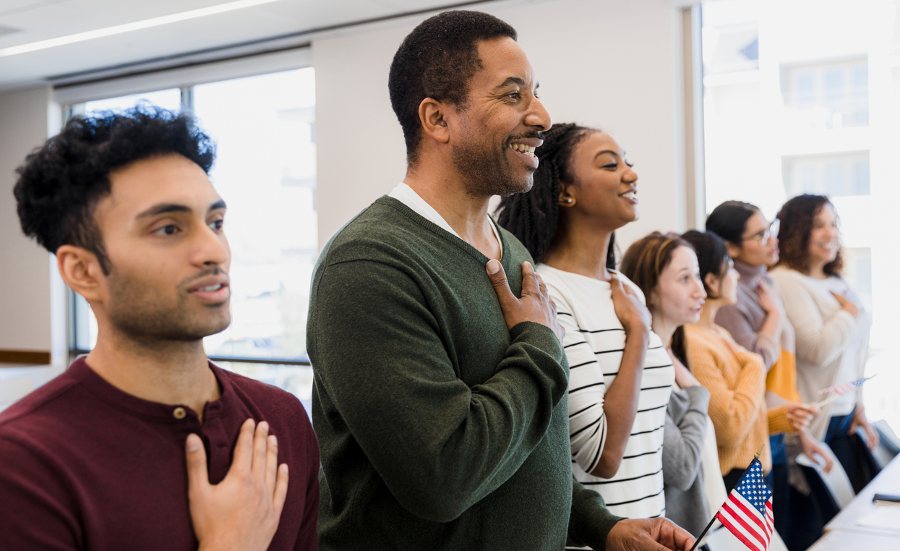 EDITOR’S NOTE: In the wake of intense backlash, the North Dakota School Board voted 8-1 Thursday to restore the Pledge of Allegiance. We win when we fight.

In 2002, the 9th Circuit Court of Appeals created a firestorm by declaring that the Pledge of Allegiance was supposedly unconstitutional — because of the phrase, “under God.”

At the time many on both sides of the aisle were upset by this decision. Republican President George W. Bush noted, “this ruling is ridiculous.” He added that this decision was “out of step with the history and traditions of America.”

At the time, The Washington Times reported: “Reaction on Capitol Hill was intense, with a group of lawmakers gathering on the Capitol steps to recite the Pledge and the Senate preparing an unusual session last night to authorize its counsel to intervene in further appeals.”

“Nuts” is how the Democratic majority leader in the Senate described the ruling. That was Sen. Tom Daschle of South Dakota.

House Majority Leader Dick Armey (R, Texas) also condemned it, saying: “A judge who believes the Pledge of Allegiance is unconstitutional doesn’t belong on the bench.”

Well, fast forward 20 years. The Pledge of Allegiance survived that legal challenge of 2002 when the Supreme Court ruled in 2004 that the plaintiff lacked standing. Meanwhile, the Pledge has now been nixed from school board meetings in Fargo, North Dakota. Alas, it would seem that news of this has received a collective yawn.

Ben Kesslen reported for The New York Post on this move against the Pledge by the members of the school board: “Board member Seth Holden said that because ‘the word “God” in the text of the Pledge of Allegiance is capitalized … the text is clearly referring to the Judeo-Christian god and therefore, it does not include any other faith such as Islam, Hinduism, Buddhism, all of which are practiced by our staff and students.’”

Unfortunately, Holden seems wildly ignorant about the “inclusion” that has flowed from America’s Christian principles — which stands in stark relief even today against countries where non-Christian religions or ideology have preeminence.

Kesslen adds: “[Holden] claimed he is not against the Pledge itself, but that it can’t be said in a school committed to diversity, equity and inclusion.”

Unfortunately, Holden seems wildly ignorant about the “inclusion” that has flowed from America’s Christian principles — which stands in stark relief even today against countries where non-Christian religions or ideology have preeminence.

Through the years I have had the privilege to interview Rabbi Daniel Lapin. Even though he’s an orthodox rabbi, he has many positive things to say about Jesus.

In one program, Rabbi Lapin told our viewers: “The easiest way to answer the question of whether life on planet earth is better because Jesus walked Jerusalem or not is very simple, and that is: Just watch the way people vote with their feet. Watch where the net flow of immigration is in the world today. Is it from Christian countries to non-Christian countries or the other way around? It is so obvious.”

It was Christians who founded America, and they did so seeking religious freedom. They then extended that freedom to others, in measures of tolerance far beyond what was found in virtually any other country in the world at the time. And now the left wants to take away the foundation which was the source of it all.

Even though it may seem like no big deal to drop the Pledge at these meetings, sadly, this is part of an on-going pattern to strip away any sense of our Judeo-Christian heritage.

A Battle in America Between Our Revolution and the French Revolution

For an interview for my Providence Forum film series on America’s Judeo-Christian roots, Dr. Os Guinness, a British native, told me, “I think the Christian roots of the U.S. matter supremely, because of the deep crisis America is in now. There’s no question that America is as deeply divided as at any time since just before the Civil War. … The deepest division is between those who understand the republic and above all freedom in the light of the American Revolution, which was largely — but sadly not consistently — biblical, because of the Reformation, and those who understand American freedom in the light of the French enlightenment and the French Revolution.”

Guinness adds, “And if you look at the ideas going through America now, postmodernism, political correctness, tribal politics, identity politics, the sexual revolution, currently the rage for socialism, they all go back to the French Revolution, not the American. And by tearing up the Christian and Jewish and Christian roots, America is really at a crisis moment. Will those roots be restored or are they going to be replaced and repealed and America will be a very different country? That’s the significance of what we’re talking about.”

To me the single greatest tragedy of this story is that it comes from North Dakota, from “flyover country.” One might expect this in San Francisco or New York City, which are well known for their leftist bent. But from Fargo, North Dakota?

One Nation Under God