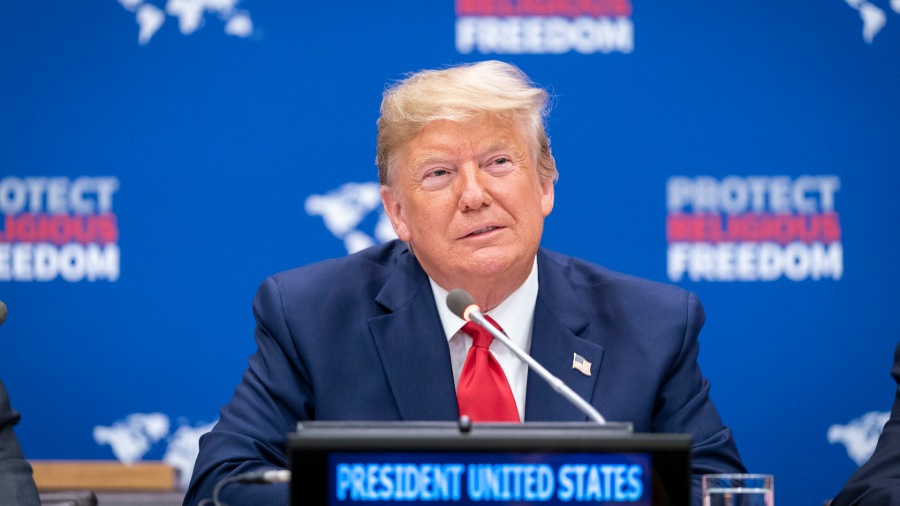 Trump made the announcement in remarks at a U.N. event called the Global Call to Protect Religious Freedom, noting that business leaders are involved in the new effort to end religious persecution.

“The religious freedom enjoyed by American citizens is rare in the world. Approximately 80% of the world’s population live in countries where religious liberty is threatened, restricted, or even banned,” Trump said.

“When I heard that number, I said, ‘Please go back and check it, because it can’t possibly be correct.’ Sadly, it was. Eighty percent.”

According to the Pew Research Center, more than 80% of the world’s population faces serious restrictions on religious expression.

As we speak, Jews, Christians, Muslims, Buddhists, Hindus, Sikhs, Yazidis, and many other people of faith are being jailed, sanctioned, tortured, and even murdered, often at the hands of their own government, simply for expressing their deeply held religious beliefs. So hard to believe.

Today, with one clear voice, the United States of America calls upon the nations of the world to end religious persecution.

The president cited attacks on synagogues in Pittsburgh and San Diego, an Easter terrorist attack on Christian churches in Sri Lanka, and a mass shooting at a mosque in New Zealand as examples of global religious persecution.

Trump noted his administration’s State Department initiated the International Religious Freedom Alliance, a coalition of nations devoted to confronting religious persecution around the world, and established a special envoy to monitor and combat anti-Semitism.

“To stop the crimes against people of faith, release prisoners of conscience, repeal laws restricting freedom of religion and belief, protect the vulnerable, defenseless, and the oppressed,” Trump added, “… we are also asking every nation to increase the prosecution and punishment of crimes against religious communities. There can be no greater crime than that.”

Trump said part of the initiative is the protection of religious sites and relics.

The Trump administration will dedicate an additional $25 million to protect such sites and relics, including historic houses of worship, the president said.

The president also announced a partnership with the U.S. business community to defend religious liberty.

“This initiative will encourage the private sector to protect people of all faiths in the workplace. The private sector has brilliant leadership. That’s why some of the people in this room are among the most successful men and women on earth,” Trump said.

“Too often people in positions of power preach diversity while silencing, shunning, or censoring the faithful,” he added later. “True tolerance means respecting the right of all people to express their deeply held religious beliefs.”

Trump recognized an American pastor, Andrew Brunson, in the audience. Brunson was imprisoned in Turkey for two years before the administration negotiated his release last October.

“They’d been trying to get Andrew out for a long time, the previous administration. I don’t think they tried too hard, unfortunately,” Trump said, adding, “We did a good job with that negotiation, Andrew. You got back.”

“It breaks my heart to see an increasing number of individuals publicly humiliated, harassed, and attacked simply because of their religion or beliefs,” Guterres said, adding:

Jews have been murdered in synagogues, their gravestones defaced with swastikas. Muslims gunned down in mosques, their religious sites vandalized. Christians killed at prayer, their churches torched.

In many hot spots around the world, entire communities have been targeted because of their faiths — including in places where those communities have existed for centuries, if not millennia. We must do all we can to avoid religious cleansing of society.

“We must reject those who falsely and maliciously invoke religion to build misconceptions, to sow division, to spread fear and hatred, and we must be vigilant about attempts to instrumentalize religion and identity to restrict the full enjoyment of rights by others and to perpetuate or justify inequalities,” the U.N. chief said.

“There is richness and strength in diversity. It is never a threat,” he said.