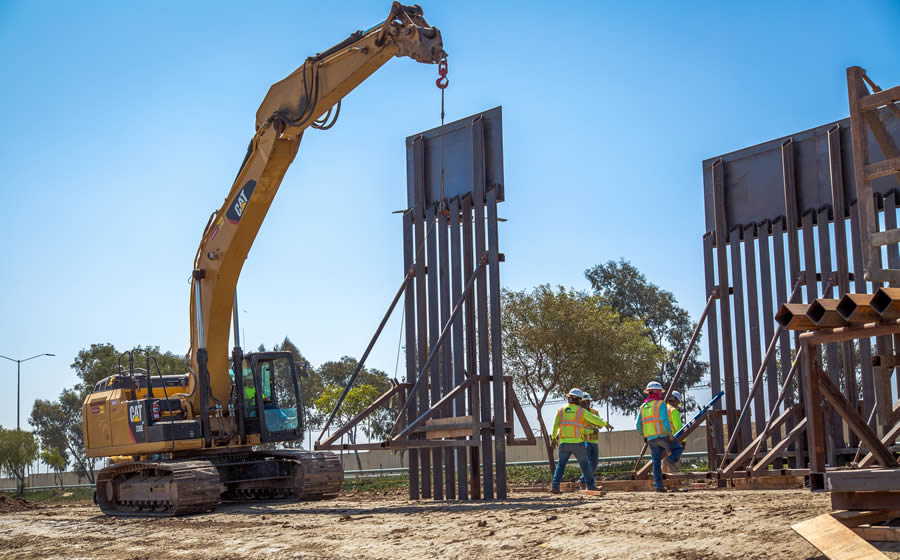 Construction Workers install a new section of the U.S.-Mexico border wall on June 19, 2018, in California.

That pithy observation is attributed to the late Sen. Daniel Patrick Moynihan, who served in the Senate from 1977 to 2001.

The final two years of Moynihan’s stint in the Senate overlapped the first two years of that of his fellow New York Democrat, Sen. Charles Schumer.

President Donald Trump, at a rally set for Monday night on the border in El Paso, Texas, should remind Schumer of Moynihan’s maxim in their fight over the need for more walls and fencing along the U.S.-Mexican border to help stem the flood tide of illegal immigration.

In their rebuttal to the president’s Jan. 9 nationally televised address outlining the need for a border barrier and his request for $5.7 billion in funding for them, both described the proposed wall as “ineffective” — Pelosi once and Schumer twice.

In her rebuttal to Trump’s State of the Union address Tuesday night, 2018 Georgia Democratic gubernatorial nominee Stacey Abrams didn’t echo Schumer and Pelosi’s “ineffective” claim, but she advanced an argument that was equally fallacious.

“America is made stronger by the presence of immigrants, not walls,” Abrams said, disingenuously omitting the key adjective in this debate, “illegal.”

Insisting that walls are “ineffective” over and over again doesn’t make it true. The facts on the ground — both in the U.S. and around the world — not only don’t support that opinion, they decisively refute it.

Byron York of the Washington Examiner recently cited figures from the Center for Immigration Studies showing that before construction of border barriers in Yuma, the Border Patrol apprehended 138,438 illegals in 2005, compared with 26,244 last year. While not 90 percent, that’s still a dramatic drop.

Meanwhile, USA Today reported last May that “[s]ince the start of Europe’s migrant crisis in 2015, at least 800 miles of fences have been erected by Austria, Bulgaria, Greece, Hungary, Macedonia, Slovenia, and others.”

Do Schumer and Pelosi know something all these other countries don’t? Not according to Hungary, which said that fencing on its border with Serbia helped reduce illegal immigration by nearly 100 percent since 2015, according to the USA Today report.

Israel’s fencing along its borders with the Gaza Strip and West Bank, as well as with Egypt and Jordan, has likewise all but eliminated illegal immigration and terrorist attacks. (The Jewish state announced Feb. 3 that it was beginning construction of an additional 40 miles of 20-foot-high, state-of-the-art fencing.)

“Walls should not be controversial,” Trump said Jan. 25, when he called Pelosi’s bluff and agreed to reopen the government for three weeks so bipartisan negotiations on border security could proceed. “Every Border Patrol agent I’ve talked to has told me that walls work. It’s just common sense.”

Their only real reason now for opposing a wall that both previously supported — and with far more funding for it then than what’s on the table today—is to deny the president a win on border security.

“We’ve seen that walls can and will be tunneled under, cut through, or scaled,” said Rep. Pete Aguilar, another California Democrat, echoing the Pelosi-Schumer line, referring to walls as “archaic solutions” to a “modern problem.”

But as one of Trump’s presidential predecessors, John Adams, observed, “Facts are stubborn things,” and Aguilar isn’t entitled to his own facts, either, because in the absence of a wall, it isn’t necessary for illegal immigrants to tunnel under or scale it.

More walls and fences of the sort Trump envisions would discourage many would-be illegal immigrants — especially women and children, who would be unable to scale them—from even attempting to migrate here from Central America in the first place.

At a bare minimum, walls significantly slow down would-be illegal immigrants who attempt to climb over or tunnel under them, making it much easier for the Border Patrol to catch them than if there were no such obstacles.

The concept of the path of least resistance suggests that additional walls would funnel would-be border crossers to areas where there are none. The need for fewer Border Patrol agents in walled areas would then enable the agents to be redeployed to where they are more urgently needed.

“Our Border Patrol tells us they need physical barriers to help them do their job … strategically placed where traffic is highest,” said Sen. Richard Shelby, R-Ala.

That’s a keen grasp of what should by now be obvious, but even if Schumer and Pelosi don’t want to believe Trump that walls are effective, they should heed the Border Patrol agents who are the boots on the ground.

Those agents know better than either Schumer or Pelosi what works and what’s needed for them to do their jobs, and they have said repeatedly that walls are a must.

Even the head of the Border Patrol during the Obama administration has said that walls “absolutely work.”

“I cannot think of a legitimate argument why anyone would not support the wall as part of a multilayered border-security issue,” Mark Morgan said on Tucker Carlson’s Fox News Channel program on Jan. 7.

“Why aren’t we listening to the experts and the people who do it every day?” he asked. “I don’t understand that.”

The president should have had a group of uniformed Border Patrol agents as his guests in the House gallery during Tuesday night’s address.

He could have turned around to Pelosi, sitting behind him, and pointed them out when he said of the wall: “It will be deployed in the areas identified by border agents as having the greatest need, and as these agents will tell you, where walls go up, illegal crossings go way down.”

It really is no more complicated than that.

Peter Parisi is an editor and writer with The Daily Signal.

Pelosi and Schumer Show Their Colors