Trump’s Relationship With Media is One of Codependency 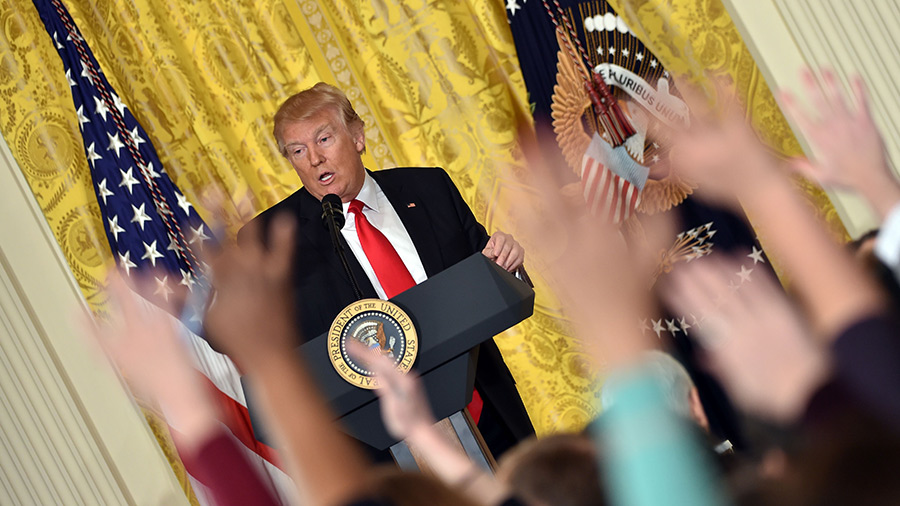 In this Feb. 16, 2017, file photo, U.S. President Donald Trump speaks during a press conference at the White House in Washington, D.C.

On the Saturday before the Fourth of July, Donald Trump tweeted, “My use of social media is not Presidential — it’s MODERN DAY PRESIDENTIAL. Make America Great Again!”

I joked on Twitter that I thought this was a perfectly apt explanation for a real estate guy. After all, that’s how President Trump spent much of his life, hawking condos by spinning downsides as upsides. In real estate jargon, an ad that boasts a “unique design” might actually mean “toilet in the kitchen.” An “original” “fixer-upper” in an “up-and-coming neighborhood” might still have the chalk body outlines on bloodstained floors.

I shouldn’t be recycling jokes from Twitter. But since so much of our national conversation is little more than sewage spillover from the sluices of the president’s Twitter feed, I figured it was OK.

Besides, maybe the president is right. The professional Trump Explainers insist that we should take him seriously, not literally. But literalness is on his side here. He’s the president. So he defines what’s presidential.

It’s the figurative defenses that are failing him. The standard justification of the president’s tweets is that he’s a “fighter” and a “counterpuncher” who needs to return fire on the “fake media.” We’ll return to the media in a moment, but this begs the question.

The people who say he has to fight and counterpunch take it as a given that this tactic is effective. Is it? What evidence is there that, say, his shabby attacks on Mika Brzezinski’s “bleeding” facelift brush back the media like a pitcher delivering a little chin music? Is the argument really that media coverage of the Trump administration would be worse if not for his seemingly aphasic outbursts and insults?

“He’s a fighter” and “He’s a counterpuncher” are not serious arguments. They’re simply euphemistic descriptions of his tendency to let his id run free like an escaped monkey from a cocaine study. (And not just on Twitter; his presence on the platform merely reflects his character.)

What does rise to the level of an argument is the claim that he’s brilliantly controlling the media narrative. And he is. But the brilliance only emerges if you tautologically define winning as making the story about yourself, regardless of the story’s content. Heads will turn your way if you pour a bowl of hot soup in your lap. And if turning heads is your metric of success, well, voila.

An analysis by Axios found that just 2.5 percent of Trump’s personal tweets in June (three out of 121) were about the White House’s policy agenda. Just last week, the Trump administration had some arguably major political, policy and legislative accomplishments. Can you name any of them? Probably not. But my guess is you can recount the details of his greatest hits on Twitter.

Which brings us to the media. On June 6 (D-Day, of all days) the president tweeted: “The FAKE MSM is working so hard trying to get me not to use Social Media. They hate that I can get the honest and unfiltered message out.”

Individual journalists such as Tapper notwithstanding, the media rival the president in their self-absorption and self-regard. If I give my dogs a choice between eating a bowl of hamburger or a bowl of kale, they won’t even see it as a choice. Similarly, given the option of talking about good news for the administration or talking about themselves as heroic martyrs and truth-tellers persecuted by the president, they’ll take the bait every time.

My National Review colleague Kevin Williamson makes a powerful case that the president needs media attention “the way a junkie needs his junk.” I think that’s irrefutable. But if attention is the junk, the media is the junkie’s co-dependent junkie girlfriend. The dysfunction of the relationship only encourages both sides to boost the dosage and rationalize the addiction. The president’s tweet of a stupid wrestling video depicting himself bludgeoning CNN wasn’t a threat of violence against journalists. But covering it that way makes the high last longer for both junkies.

The simple truth: It was a churlish and juvenile outburst. But, hey, that’s what passes for presidential these days.