On Monday, the president delivers the keynote address at the Global Call to Protect Religious Freedom. 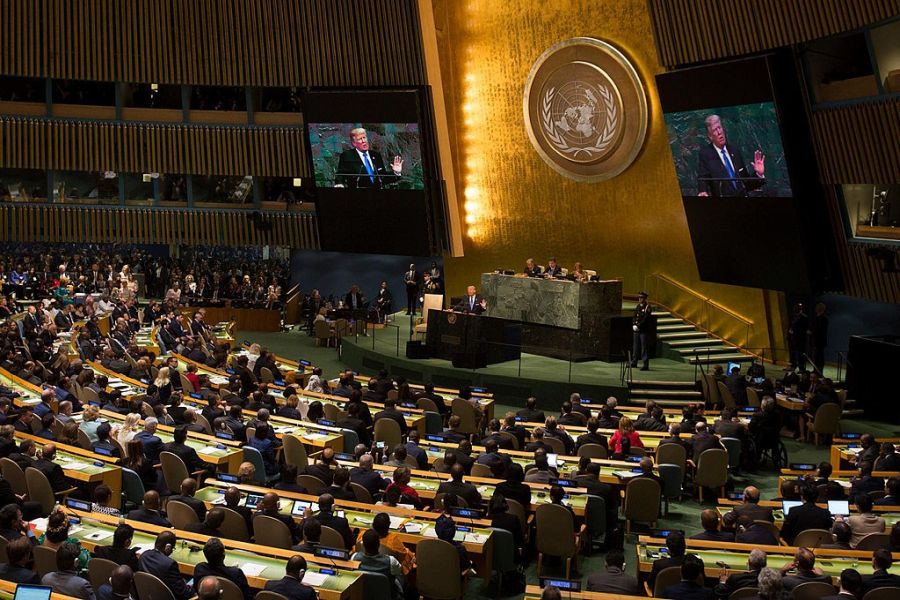 By Emilie Kao and Joel Griffith Published on September 23, 2019 •

The United Nations will host its annual gathering in New York this week. But amid all the hubbub, President Donald Trump is setting aside time to speak on a pressing issue: religious freedom and persecution around the world.

The president will keynote an event Monday called the Global Call to Protect Religious Freedom. This is exactly the right issue to focus on at the U.N.

Today, more than 80% of the world’s population lives under serious restrictions of religious freedom, according to the Pew Research Center. In places like Iran, Burma, and the Chinese province of Xinjiang, religious minorities like Christians, Rohingya Muslims, and Uighur Muslims face threats to their very existence.

By nature, free people disagree with one another in an infinite number of ways. If we are to remain free, we must be able to disagree without fear of punishment.

Attacks on religious believers fuel social instability, violent conflict, and the deterioration of other human rights.

By calling upon all nations to protect religious freedom, the president will be giving a voice to those who too often lack one. He will also be celebrating a principle that is foundational to peace and security.

His call for religious freedom is particularly needed in light of this year’s attacks on synagogues, mosques, and churches, which have claimed the lives of innocent Jews, Muslims, and Christians. From Pittsburgh and San Diego to Sri Lanka and New Zealand, religious freedom is under threat.

70 Years After the Declaration of Human Rights, the UN Has Strayed

In 1948, the nations of the world pledged in the Universal Declaration of Human Rights to protect every human being’s freedom to adopt or change religious belief, and to live out those beliefs in the public square in addition to private life.

The U.N. has sadly strayed from this heritage and, with a new initiative, has become a threat to religious freedom.

Earlier this year, U.N. Secretary General Antonio Gutteres launched a Strategy and Plan of Action on Hate Speech as part of an effort to counter attacks on religious minorities. While well-intended, this effort is the wrong approach and would likely backfire.

The problem with hate speech laws is that the powerful use them to redefine disagreement itself as a form of discrimination. If you hold a certain opinion that powerful elites disagree with, your speech may soon be called “hateful” and “discriminatory.”

By nature, free people disagree with one another in an infinite number of ways. If we are to remain free, we must be able to disagree without fear of punishment. Hate speech laws would quash dissent in violation of liberal norms.

The U.N. should take particular issue with hate speech laws, given its task of supporting the liberal order. Hate speech laws empower governments to censor their citizens when they express their values and beliefs, including religious beliefs. The U.N. ought to openly reject hate speech laws.

In the realm of religion, the stakes are especially high. Abrahamic religions and other faiths offer truth seekers different and mutually exclusive belief-systems regarding the meaning of life, the existence of God, and the nature of good and evil.

Freedom allows the seeker to compare these claims, choose among them, and then order his or her life around them. And such beliefs are found everywhere, in every culture. Protecting their freedom to choose and practice a religion is central to their flourishing.

Unfortunately, the concept of hate speech is all too often wielded to silence comparisons between ideas that are essential to truth seekers.

For example, the Organization of Islamic Cooperation has actively advanced blasphemy laws at the U.N. under the misleading moniker “defamation of religions.” In Pakistan, the government has used blasphemy laws to punish the weak, religious minorities, and women.

One Catholic mother of five, Asia Bibi, spent years on death row simply because a coworker with a personal grievance accused her of insulting the prophet Muhammed. Her acquittal sparked nationwide rioting.

Rather than pacifying the hostility, blasphemy laws fomented social intolerance and violence by legitimizing the idea that offensive words cause injury and should be punished—the same notion that defines hate speech.

Anti-Semitism and the UN

Although the specifics of the U.N. secretary general’s plan have yet to be fully articulated, the U.N.’s own track record presents a cause for concern.

One impetus for the campaign is the rise of anti-Semitism—a valid concern on its face. Yet resolutions at the U.N. routinely delegitimize, demonize, and apply double standards to the Jewish state of Israel. Political leaders—including some in the U.S.—have recently unleashed old anti-Semitic tropes.

Combating anti-Semitism does not require giving political leaders the power to shut down speech. Government leaders should address the anti-Semitism within their own ranks, and the United Nations should take a hard look at its own anti-Semitic resolutions.

In another disturbing trend at the U.N., a designated official called the independent expert on protection against violence and discrimination based on sexual orientation and gender identity called for religious and political leaders to be held accountable for speech that the U.N. deems “homophobic or transphobic.”

European governments have already punished pastors and imams for stating that marriage is between a man and a woman. The U.N. should not exacerbate this illiberal trend by treating reasonable disagreements about sexuality and marriage as discrimination.

In 1992, the U.S. Senate ratified the International Covenant on Civil and Political Rights, a U.N. treaty that binds signatory nations to protect a list of political rights. When ratifying it, the Senate made a reservation to Article 20, which prohibits advocacy of “national, racial, or religious hatred.”

The senators who made that reservation certainly did not condone hatred. But they were discerning. They saw that such a rule could be misused and wielded to restrict freedom. After all, as a nation founded by religious dissenters, Americans know how easily terms like hate can be used by the powerful to limit the speech of the powerless.

The US Should Take a Different Path: Liberty

As the U.N. meets again, the U.S. should lead the world on a different path. Instead of promoting the misguided idea of hate speech, countries should focus on empowering the oppressed by protecting religious liberty and free speech for all, and by calling upon politicians and U.N. bureaucrats to examine their own biases.

A plaque at the Statue of Liberty is inscribed: “Liberty is the air America breathes…”

Liberty is essential for people around the world to seek knowledge about the truth, and to speak up against those who oppress them based on their beliefs.

Even the most well-intended plans to combat anti-religious attacks through restrictions on speech will be counterproductive. Extinguishing liberty won’t simply suppress vile ideas — it will also snuff out those who speak from their conscience

Emilie Kao is director of the Richard and Helen DeVos Center for Religion & Civil Society at The Heritage Foundation.

Joel Griffith is a research fellow in the Roe Institute at The Heritage Foundation.