Should Trump’s Evangelical Advisors Abandon Him?

Right now, I’m glad they’re still together, doing their best to give him strong counsel. 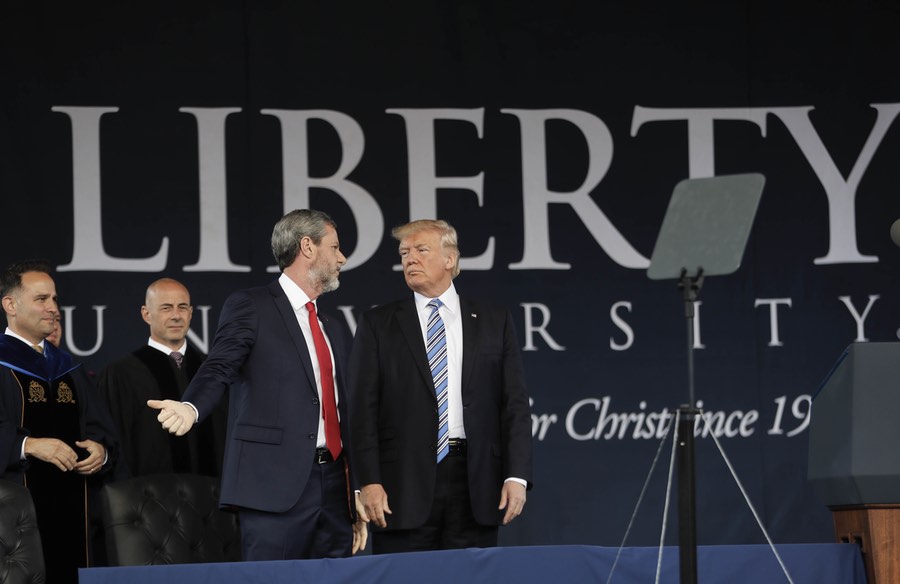 President Donald Trump, center, on stage with Liberty University President Jerry Falwell, left, after giving the commencement address for the Class of 2017 at Liberty University in Lynchburg, Va., Saturday, May 13, 2017. Falwell is a member of President Trump's faith advisory council.

In the aftermath of the President’s comments about Charlottesville, some Republican leaders have distanced themselves from him, while a number of major business leaders have stopped supporting him. Why are the evangelical leaders on his faith advisory council still standing with him?

As reported by NPR, “President Trump’s belated and halfhearted denunciation of the hate groups that marched in Charlottesville, Virginia., has cost him the support of numerous business leaders and fellow Republicans and prompted at least a half-dozen nonprofit organizations to cancel planned fundraising events at his Mar-a-Lago resort.

“By contrast, Trump’s religious advisers have been mostly silent” — with the notable exception of Pastor A. R. Bernard of New York City. This respected mega-church pastor said, “It became obvious that there was a deepening conflict in values between myself and the administration.”

Before Rev. Bernard announced his resignation, Matthew Dowd, a “proud independent” and the Chief Political Analyst for ABC News tweeted, “Not a single member of Trump’s Evangelical Council has resigned. We have learned corporate America has a greater moral compass. So so sad.” The tweet has since gone viral.

How is it, then, that political leaders and business leaders feel the need to distance themselves from the President while these other spiritual leaders do not? Are these Christian leaders lacking in integrity? Have they sold their reputation, not to mention their souls, for a seat at the President’s table?

Of course not. Now is when President Trump needs them most, and it is very wrong to assume that their public silence reflects their private silence.

To the contrary, they are doing what faith leaders are supposed to do: praying for the President and doing their best to speak into his life, calling him to do what is right in God’s sight and is best for the nation.

To be clear, I’m not speaking officially for the faith advisory council, although I’m close to several of the men serving on that council. But I do believe that most (or all) of them will affirm what I’ve written here. It is for times like this that the council exists.

Counsel is Not Endorsement

First, let’s remember that some of the men on this council did not endorse Trump for president, and at least one told him that he was their last choice of all the Republican candidates. Why, then, do we equate their presence on a faith-based council with a sign of endorsement or approval?

Second, it is wrong to assume that these men are simply yes men who never differ with Trump or risk their good standing with him. One of these leaders has shared on my radio show that on more than one occasion he has respectfully rebuked Mr. Trump in strong and clear terms.

Isn’t it good to know that these solid, godly leaders are still doing their best to speak truth to the president?

In fact, this evangelical leader once took the president to task so strongly that minutes later, he called back to apologize for being so forceful. At no point, though, has the President rebuffed their words or shut them out of his life.

Isn’t it good to know that these solid, godly leaders are still doing their best to speak truth to the president? Wouldn’t you want people like that having access to him? Why would they abandon him now?

Fourth, it is ridiculous to think that ministry leaders should dance to the media’s tune. Remember: They are ministers, not politicians.

When it comes to the massive controversy concerning the President’s statements about Charlottesville, I think we all agree that he should have been more clear and specific in his first statement, which pointed to violence “on many sides.”

He sought to correct this two days later when he said, “Racism is evil. And those who cause violence in its name are criminals and thugs, including KKK, neo-Nazis, White Supremacists, and other hate groups are repugnant to everything we hold dear as Americans. Those who spread violence in the name of bigotry strike at the very core of America.”

Pray that the Lord would give President Trump’s advisors wisdom and clarity and that he will have ears to hear.

Although some critics felt he was being insincere and others said it was too little too late, he did make himself perfectly clear: All these white supremacist groups are evil and he rejects them as utterly un-American.

This is when all hell broke loose, and it was after this that more and more leaders began to distance themselves from him.

On the one hand, having categorically denounced the Neo-Nazis and their ilk the day before, he was right to draw attention to the problems on both sides, since there certainly was blame to spread around.

On the other hand, he was quite wrong to say that there were “some very fine people on both sides.” Really? Some “very fine” neo-Nazis and KKK members?

This is something he needs to clarify, and I hope that these faith leaders can help him to do so.

If, in fact, he simply expressed himself in an ambiguous and confusing manner, then he can easily correct the matter, apologize, and move on, not giving further fuel for the critics’ fire.

But if he meant that there are “some very fine” neo-Nazis, White Supremacists, and KKK members, then I would expect the rest of the faith leaders to follow in A. R. Bernard’s footsteps, telling the President they can no longer be associated with him.

Pray that the Lord would give them wisdom and clarity and that President Trump will have ears to hear. It truly is a critical time for our country.

*Note: I fully respect Rev. Bernard’s decision and do not want to imply in any way that he forsook the President in a time of need. He has his own race to run and he answers to God on this, not you or me.

It’s Either Really Good or Really Bad With President Trump