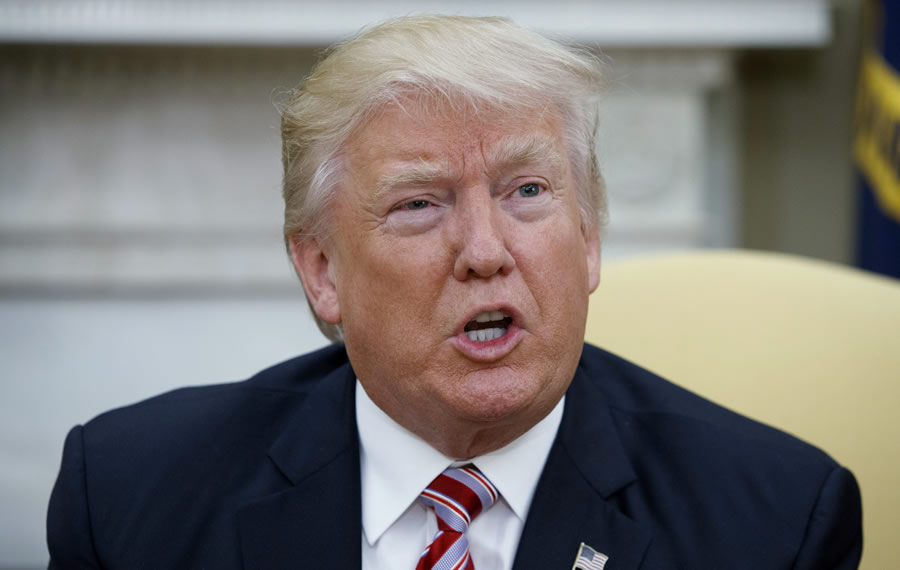 In this May 10, 2017, photo, President Donald Trump talks to reporters during a meeting with Dr. Henry Kissinger, former Secretary of State and National Security Advisor under President Richard Nixon, in the Oval Office of the White House in Washington.

President Donald Trump has obeyed the law since taking the oath of office. That is a better record than some feared. It is a better record than he himself promised many times during the campaign. In addition to expressing contempt for a sitting federal judge due to his ethnicity (which Trump stooped to because the judge issued a ruling against him personally), he also volunteered that he would order the U.S. military to torture suspects. Told that this would be asking servicemen to violate the law, he scoffed, “They won’t refuse. They’re not gonna refuse me. Believe me.” He lauded tyrants and strongmen. He encouraged violence at campaign rallies. And he refused to say that he would accept the legitimacy of the vote if it went against him.

So, when he made a number of solid appointments, chose a stellar Supreme Court justice, and — most importantly — acquiesced to the rulings of federal courts (however much he may have found their reasoning flawed), fears of a lawless presidency eased.

Donald Trump is not going to be an American dictator. He is, however, proving to be his own worst enemy — which is an amazing feat, considering the intensity of feeling against him. Despite the best efforts of the minions who stand ready to justify and explain away his every pratfall (usually by changing the subject to Democratic overreaction), Trump’s emotionalism, recklessness and unseriousness are weighing down his presidency.

Of course there were reasons to fire James Comey. The Wall Street Journal editorial page recommended that Trump dismiss him in January, due to Comey’s history of letting political judgments affect prosecutorial decisions. Judge Laurence Silberman elaborated on them in a recent op-ed, and newly appointed Deputy Attorney General Rod Rosenstein summarized those misjudgments in a memo. In short, Comey arrogated power to himself that the FBI chief does not possess: “There is a well-established process for other officials to step in when a conflict requires the recusal of the Attorney General,” Rosenstein wrote. Worse: “We do not hold press conferences to release derogatory information about the subject of a declined criminal investigation.”

That’s all very well, though someone should explain to Sarah Huckabee Sanders that these are not “atrocities.” I believe that Judge Silberman and Deputy Attorney General Rosenstein have such scruples. As for Trump, it’s possible, but consider that A) he effusively praised Comey for those very acts at the time, B) he assured Comey after those acts, i.e., in January, that his job was secure, and C) he tweeted just a few days ago that Comey was too soft on Clinton (not too tough).

Also, a person motivated by punctilious concern about the proper role of the FBI director would not have praised Comey on Oct. 31, 2016, for making Hillary Clinton’s life more difficult when he announced the re-opening of the email investigation. “It took a lot of guts,” Trump told a rally. “I was not his fan, but I’ll tell you what: What he did, he brought back his reputation. He brought it back.” I don’t know about you, but I’m willing to say that Trump’s views of Comey track perfectly with whether Comey’s latest acts help or hurt Trump. (In this, Democrats are in the same boat, just inverted.)

As usual with Donald Trump, he could not keep himself out of any drama, and mentioned in the letter firing Comey, “I appreciate you informing me, on three separate occasions, that I am not under investigation.” Well, that might be true and yet not the whole story. If Trump’s campaign, though not Trump personally, is under investigation, it remains a potential problem for the president. And if it’s not true, Comey will say so when next he testifies on Capitol Hill, which will only further undermine the president’s credibility. Whatever people may think of Comey, he is not considered dishonest. So when he is asked, “Did you assure the president three times that he was not under investigation?” he will answer truthfully, just as he did when asked about Trump’s claim that Barack Obama wiretapped Trump Tower.

President Trump did not think this through. Members of his leaky staff have expressed surprise at the outcry. They figured that Democrats would not stick up for Comey, out of loyalty to Hillary Clinton, which betrays a staggering level of naivete about Washington. There was no replacement nominee waiting in the wings. Firing Comey now instead of in January renews suspicion that the president has something to hide. It is a shambles.

If this is sheer incompetence and petulance and nothing worse, the president could save himself and the country a lot more heartburn by releasing his tax returns. No one will care if he’s not as rich as he claimed. The burning question is whether he has a Russia connection.