Critics howl that he is "changing the Constitution." But that's Fake News. 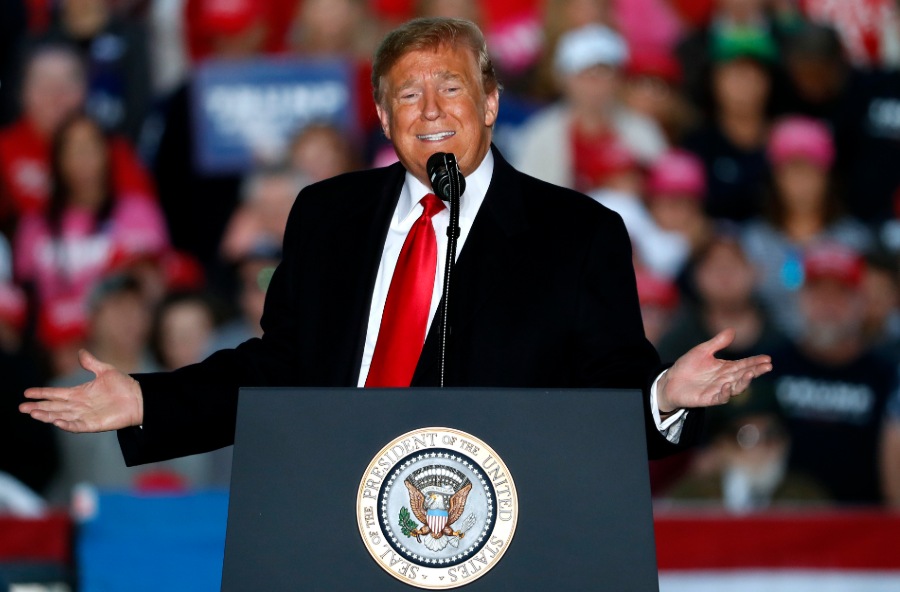 In this Oct. 27, 2018, photo, President Donald Trump speaks during a rally at Southern Illinois Airport in Murphysboro, Ill.

President Donald Trump made a bold move before the mid-terms — when Americans will decide whether to give the Democrats a majority in the House. So they can (as promised) impeach him. Trump will attempt to end so-called “birthright citizenship” for children born to illegal immigrants and tourists. Trump declared in an interview with Axios on HBO he plans to sign an executive order to stop the practice.

According to Pew research estimates, roughly 7.5% of all births in the U.S. are to illegal immigrants. That’s some 300,000 babies a year. Don’t forget the 8,000-something children annually resulting from “birth tourism.” That’s where expectant mothers from wealthier countries fly to the U.S. simply to have their child here. So he will be an American citizen.

A Bit of History and a Lot of Fake News

You’ve heard that birthright citizenship is hard-wired into our Constitution. It isn’t. In the wake of the Civil War, the 14th Amendment passed. The “Citizenship Clause” specifically intends to assure former slaves and their children full citizenship and full rights. It reads:

The Senate, when crafting the 14th Amendment, was clear in its meaning. Senators were adamant that the Amendment did not mean the granting of citizenship to any child who just happens to emerge on our soil. As Sen. Jacob Howard, one of its authors, said it all in 1866. “This (amendment) will not, of course, include persons born in the United States who are foreigners, aliens, who belong to the families of ambassadors or foreign ministers accredited to the government of the United States …” (emphasis added.)

“Birthright citizenship” for illegal immigrant babies is not in the Constitution.

Jon Feere of the Center for Immigration Studies says Howard was not alone. “Opposition to granting citizenship to individuals subject to a foreign power was strong throughout the Senate. It does seem that the framers of the Citizenship Clause had no intention of establishing a universal rule of automatic birthright citizenship.”

The Key Phrase: “Subject to the Jurisdiction Thereof”

The phrase, “subject to the jurisdiction thereof” is crucial. So says Michael Anton, a former national security adviser to Trump. A child of illegal immigrants is not “subject” to the laws of United States.

“What they are saying is, if you are born on U.S. soil subject to the jurisdiction of the United States — meaning you’re the child of citizens or the child of legal immigrants, then you are entitled to citizenship,” Anton told Fox News in July, “If you are here illegally, if you owe allegiance to a foreign nation, if you’re the citizen of a foreign country, that clause does not apply to you.”

Yet, about 60 years ago, the executive branch started unilaterally applying the Citizenship Clause to children of illegal immigrants. Canada stands as the only other developed nation on the planet to grant citizenship to any and all born on its soil.

Not in the Law, Never in the Courts.

So “birthright citizenship” for illegal immigrant babies is not in the Constitution. And Feere points out this fascinating fact: “The executive branch’s current practice of extending birthright citizenship to nonresident aliens has never been authorized by any statute or any court decision.”

Vice President Pence echoed this Tuesday. He said, “The Supreme Court of the United States has never ruled on whether or not the language of the 14th Amendment ‘subject to the jurisdiction thereof’ applies specifically to people who are in the country illegally.”

In other words, citizenship as a birthday present was never codified into law. Never even challenged in court.

So you will hear new stories, pundits and illegal immigration advocates today. They’ll say that President Trump is trying to unilaterally “change the Constitution.” But they will be lying. He would merely be undoing an executive branch action. One that is contrary to the original intent of the Amendment and the will of the U.S. Senate. An action never confirmed by any court in the land.

President Trump was surprised to hear he could eliminate the birthright citizenship. “I was always told to me that you needed a constitutional amendment,” he told Axios. “Guess what? You don’t. You can definitely do it with an act of Congress. But now they’re saying I can just do it with an executive order.”

Trump did not give a timetable for when he would issue an executive order. However, Sen. Lindsay Graham announced Tuesday he plans to “introduce legislation along the same lines as the proposed executive order from President Trump.”

He wouldn’t be the first. In fact in 1993, none other than former liberal Democratic Senator Harry Reid introduced such legislation. It would have explicitly limited birthright citizenship to the children of U.S. citizens and legal resident aliens.

Was Reid called the names Graham and Trump will get called, today? Of course not. As John Zmirak and I explain in The Politically Incorrect Guide to Immigration, orderly and lawful immigration has, until recent years, been a bipartisan issue.

One thing is certain: Any executive order or law passed by Congress will immediately be challenged in court. Ultimately it will be decided by the Supreme Court. The same Supreme Court that just added an originalist interpreter of the Constitution.

And you thought Democrat efforts to destroy Brett Kavanaugh had to do with his high school drinking habits.

Al Perrotta is the Managing Editor of The Stream, and co-author with John Zmirak of The Politically Incorrect Guide to Immigration.