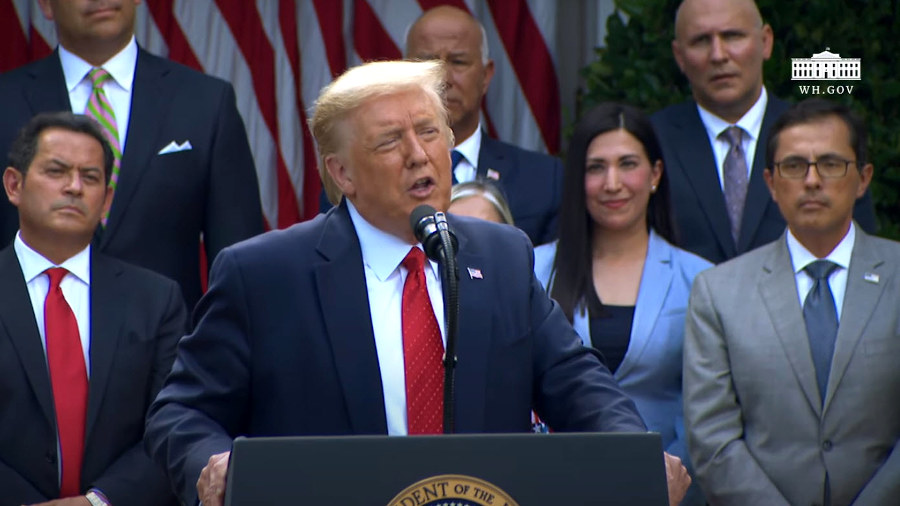 “We will expand our efforts across all of the federal government to create educational and economic opportunity for Hispanic Americans,” Trump said to applause in the Rose Garden, describing the White House Hispanic Prosperity Initiative.

The president said education and school choice are “at the heart of our strategy to bring a prosperous future for every Hispanic American, as well as all Americans.”

“We are a believer in choice. The other folks don’t believe in choice,” Trump said. “Choice is a great civil rights issue, and may be the great one of our times.”

“I’m going to fight to ensure that every Hispanic American parent has the freedom and the right to send your child to the public, private, charter, faith-based, magnet, home or independent school of your choice,” Trump told an audience of invited business and community leaders of Hispanic descent, adding:

It’s also a moral issue and it really is a fundamental issue of civil rights. No American student should ever be trapped in a failing government school, which has happened so often for so many years. It’s one of the problems you see when you see these cities going up in flames.

The executive order encourages private-sector initiatives and fosters public-private partnerships. It also establishes the President’s Advisory Commission on Hispanic Prosperity, which will identify in-demand jobs for students that include apprenticeships, internships, and work-based learning opportunities.

During his administration, Trump said, the Hispanic graduation rate reached an all-time high and the dropout rate fell to an all-time low. Before the COVID-19 pandemic, he said, Hispanic American unemployment was at historic lows and wages were at historic highs.

“We’re getting back to it very quickly,” Trump said.

Housing and Urban Development Secretary Ben Carson said his department looked at all communities that are particularly affected by COVID-19, and how the disease often resulted in rising cases of hypertension, obesity, asthma, and diabetes.

“And your emphasis on education and educational choice will be the thing that really distinguishes and liberates our people,” Carson said. “So thank you, Mr. President.”