Trump, Sanders, Hofer and Khan as the Four Horsemen of the Apocalypse 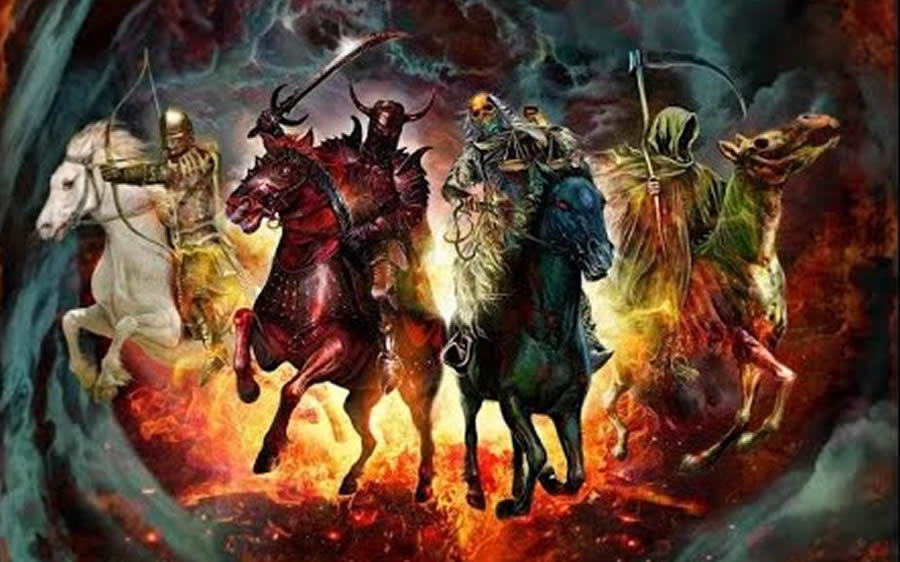 Karl Marx was wrong when he quipped that great history appears twice, first as tragedy and again as farce. He forgot surrealism.

Who would have expected the Four Horsemen of the Apocalypse to present them themselves in the personages of a billionaire reality-show star, an aging Vermont hippy, a Glock-toting Austrian rightist and a British-born Pakistani who “sucked up to extremist Muslims” through most of his career. I refer to the presumptive Republican nominee for president, the second-place candidate for the Democratic nomination, the likely next president of Austria and the just-elected Mayor of London. These are portents of the future, like comets or two-headed calves.

Why are Americans in open revolt with the unemployment rate at just 5%? The answer is that today’s America has 25% unemployment by the standards of the 1930s, but Americans have just noticed the fact.

The lives of perhaps two billion people around the world are going pear-shaped, and the great battles of our time are not about the allocation of scarce resources, but of abundant misery. Russia Today reported May 7 on street demonstrations in Berlin for and against German Chancellor Angela Merkel’s immigration policy. The first two comments on the news story read as follows:

Europe is controlled, as with the US government, by those [Jews] who were struck out of Europe and given Palestinian land to call their own.

What used to be prima facie evidence of mental defect now has become commonly accepted opinion (although it is still evidence of mental defect). It doesn’t matter much for the Europeans whether they choose to believe in a world conspiracy by Jewish bankers or a secret Muslim plot to conquer them, for their prospects are dim whether both, either, or neither are true. Europe may go supine before a flood of culturally-unassimilable migrants, or it may elect for one last fling with the nasty old nationalism that nearly destroyed it during the two world wars of the 20th century. The result will be the same.

Europeans who encourage migration, like Chancellor Merkel and Pope Francis, may be the cause of the greatest humanitarian catastrophe in history, by encouraging tens of millions of desperately poor people to seek a welcome in Europe. The United Nations counts 60 million refugees, almost all within reach of Europe upon a few thousand dollars’ investment in a passport and passage, and there are ten times that number who would gladly become refugees if opportunity presented itself. Millions and perhaps tens of millions will die as a result of such misdirected kindness.

The Austrians responded by giving 36% of the first-round vote to presidential candidate Norbert Hofer, who almost certainly will win the presidency during the second round. That would make the Freedom Party politician head of state, not head of government, but it is the first time that the far right has been in position to control a key national office in any European country since the Second World War. The Germans grumble but stand by their beleaguered and unpopular Chancellor, but the real test will come in the April 2017 national elections, when the right-wing, anti-immigration National Front will become the largest national party.

If the continental world is polarized, the Anglo-Saxon world is in full schism. London elected a Muslim mayor, Sadiq Khan, in last week’s elections, and a Muslim with a radical pedigree. Writing in the Daily Beast, Maajid Nawaz explains that Khan may not be an outright jihadist, but he “ingratiated himself in the London Islamist scene” through close friends and relations. Across the pond, Republicans backed a presidential candidate who promised to exclude all Muslim non-citizens from the United States, with the support of an absolute majority of Americans.

Never during the depths of the Great Depression of the 1930s, when the unemployment rate peaked at 25%, did the likes of a Donald Trump wrest control over a major party. Nor, for that matter, did an avowed socialist like Bernie Sanders present a serious challenge to the Democratic mainstream. Left-wing Hollywood scriptwriters warned about malevolent tycoons in films like Frank Capra’s 1941 Meet John Doe, but the voters stood behind the centrist Franklin Roosevelt.

Why are Americans in open revolt with the unemployment rate at just 5%? The answer is that today’s America has 25% unemployment by the standards of the 1930s, but Americans have just noticed the fact. Americans viewed the Great Depression as an aberration; today’s Americans have settled into a new normal. Just after World War II nearly 90% of adult men worked, or looked for work. Today the proportion is less than 70%. Some of the unemployment is called college education, which leaves America’s millennials with $1.2 trillion in student loans and the lowest skill level in the industrial world.

Those are Bernie Sanders’ voters.

Some of the unemployment is voluntary: “In today’s average white working-class neighborhood, about one out of five men in the prime of life is not even looking for work; they are living off girlfriends, siblings or parents, on disability, or else subsisting on off-the-books or criminal income,” writes sociologist Charles Murray.

Those are Trump voters. These Trump voters and these Sanders voters have a common view of the world, which is that someone else must suffer for them to benefit; they differ on who should pay (Chinese and Mexicans vs. the wealthy). No one will tell the American millennials that they were sold a trillion-dollar fraud in the form of university education, and no one will tell their aging parents that never again will Americans be paid for being Americans. No one will tell the Europeans that it doesn’t really matter what immigration policy they choose: if they do not have children, soon enough their lands will belong to migrants from Africa and the Middle East. In politics, it doesn’t pay to be the bearer of evil tidings, as in Robert Frost’s poem: “As for his evil tidings, Belshazzar’s overthrow, Why hurry to tell Belshazzar What soon enough he would know?”