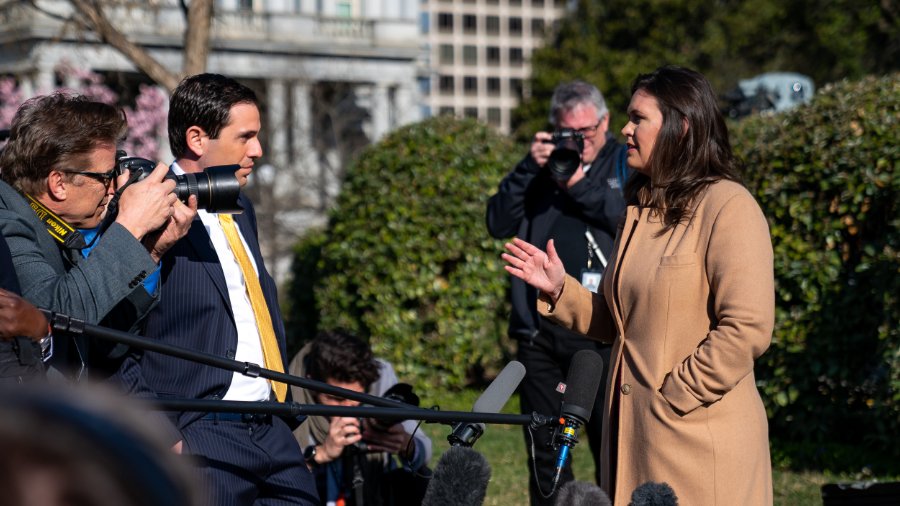 In this March 25, 2019, file photo, then-White House Press Secretary Sarah Sanders meets with reporters outside of the White House.

Trump said that Sanders “will always fight for” Arkansas’ citizens and “do what is right,” according to the statement.

“Thank you President Trump for your endorsement and for always believing in me. As governor I will defend our freedom and lead with heart,” Sanders said in a tweet.

Thank you President Trump for your endorsement and for always believing in me. As governor I will defend our freedom and lead with heart pic.twitter.com/QFtyuNpSm1

Trump announced his endorsement and praised the former press secretary as someone who “loves our Military and Veterans — and her home state of Arkansas” and that she “will be a GREAT Governor,” according to the statement Sanders tweeted.

“Sarah Huckabee Sanders is a warrior who will always fight for the people of Arkansas and do what is right, not what is politically correct,” Trump’s statement that Sanders tweeted, said.

“Sarah is strong on Borders, tough on Crime, and fully supports the Second Amendment and our great law enforcement officers,” Trump’s statement said.

The former press secretary announced that she is entering the Arkansas governor’s race in a video Monday. Sanders described her career in the White House under the Trump administration and said she was committed to fighting “the radical left.”

“As governor, I will defend your right to be free of socialism and tyranny, your Second Amendment right, your freedom of speech and religious liberty,” Sanders said.

Sanders said she would reflect Trump’s agenda should she get elected.

“I will not apologize for who I am or who I am fighting for,” Sanders said. “I will not bow down to the radical left. Not now. Not ever.”

Sanders will be in a Republican primary for Gov. Asa Hutchinson’s spot even though she is widely known in Arkansas. Hutchinson will not be able to run for governor after he fulfills his two terms.

Sanders’ campaign didn’t immediately respond to a request for comment. Hogan Gidley, former White House deputy press secretary and spokesman for Trump’s 2020 campaign, told the Daily Caller News Foundation he doesn’t know if Trump will be on the campaign trail with Sanders.