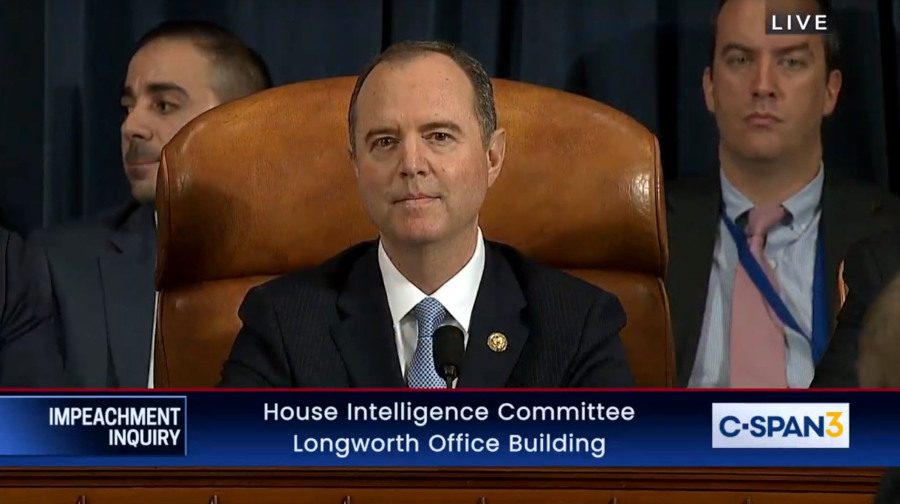 House Republicans sought earlier this week to get a minority hearing to call their own witnesses, as was done in previous impeachment inquiries. House Democrats, in the majority, rejected the proposal.

That’s among the reasons many in the GOP were disappointed when Senate Judiciary Chairman Lindsey Graham, R-S.C., told Fox News Channel that the Senate impeachment trial — if there is one — should be short and not include witnesses.

Graham said Thursday that he doesn’t “want to give it legitimacy” because Democrats’ case against President Donald Trump is “a crock.”

Senate Majority Leader Mitch McConnell, R-Ky., told Fox News host Sean Hannity on Thursday night: “My hope is that it will be a shorter process rather than a lengthy process.”

According to an official White House transcript, Trump and Zelenskyy briefly discussed Trump’s interest in Ukraine’s investigating its own possible interference in the 2016 U.S. presidential election and the younger Biden’s lucrative employment by a Ukraine energy company while his father was President Barack Obama’s point man on Ukraine policy.

“It has been a phenomenal and frankly frightening display of injustice that the Democrats have been allowed to have. So the motion to recommit was to say, ‘Let us have a minority hearing.’ Every Democrat voted against it,” Rep. Jody Hice, R-Ga., told The Daily Signal.

“So, they are voting against their own rules. The Democrats have just railroaded this thing through,” Hice said.

The House Judiciary Committee, in two 23-17 votes Friday morning along party lines, approved impeachment charges of abuse of power and obstruction of Congress against Trump, setting up a full House vote next week.

Noting the reported coordination between House Intelligence Chairman Adam Schiff’s office and the whistleblower in the case, Hice said he thinks the California Democrat also should answer questions if there is a Senate trial.

“When it goes to the Senate, assuming it’s going there for a trial, at that point the president should have the right to have input as to who needs to be called to testify under oath,” Hice said. “I would think under that context that individuals like Hunter Biden, the whistleblower, a host of others [would appear], I would like to even see Adam Schiff.”

He is the architect behind all of this. He ought to give testimony under oath. How did all this get started? What kind of coordination did he and his staff and the whistleblower have? These are all pertinent witnesses that have yet to be brought forth for testimony. I would like to see that sort of thing happen.

Now that the Judiciary Committee has adopted two articles of impeachment, a simple House majority is all that is required to send the charges to the Senate for a trial.

After the House committee’s votes Friday, Trump seemed open to either a short trial or a longer one with more witnesses.

“I’ll do whatever they want to do,” Trump said, referring to McConnell and the rest of the Senate’s Republican leadership:

It doesn’t matter. I wouldn’t mind a long process because I’d like to see the whistleblower, who is a fraud. The whistleblower wrote a false report and I really blew it up when I released the transcript of the call. Then, Schiff gets up and he–I blew him up too. He made a statement in front of Congress that was totally false. Then, a long time after he made it, when he got caught, he said, ‘Oh, well, that was a parody.’

In the Senate impeachment trial of President Bill Clinton in 1999, Republican House managers did not hear live testimony on the House floor, but showed three video depositions to the full Senate.

Asked whether Trump would be disappointed if the Senate did not attempt to hear from Hunter Biden and others, presidential counselor Kellyanne Conway said he is looking for a fair process.

“The president is confident he will get a full and fair true trial that Americans can relate [to], rather than whatever this has been, this multilayered process in the House that is unserious and was executed upon in a very unserious way,” Conway said Friday in response to a question from The Daily Signal during a press briefing.

“It was very difficult to follow, and I’m admitted to practice law in four jurisdictions,” she said. “I couldn’t follow it at all because it didn’t resemble any legal proceeding that any of us had ever witnessed.”

In response to another question, Conway agreed that Schiff should testify.

“I hope he [Schiff] is practicing, because he is a fact witness,” Conway said. “He ought to testify in front of the Senate. Everybody named Biden should too.”

She said that if the Senate trial is “organized” and “focused,” then it’s possible to hear depositions or testimony from fact witnesses and still have a short process.

Trying to Get Joe Biden to Testify Could Complicate Matters

But bringing forth witnesses could be problematic, said Thomas Jipping, a former chief counsel to the Senate Judiciary Committee who was involved in two impeachment trials of federal judges.

“There has been some criticism that the House launched an illegitimate impeachment,” Jipping, now deputy director of the Meese Center for Legal and Judicial Studies at The Heritage Foundation, told The Daily Signal. “So, the Senate would be reluctant to have complicating factors.”

Jipping added: “One reason the  Republican Senate majority is reluctant to go down that path is that they want to get this over with.”

The Senate could force Hunter Biden and others to testify or face prosecution for contempt of Congress, said former independent counsel Robert Ray, who was involved in the investigation that led to Clinton’s impeachment.

“The Senate has the power to compel witnesses. So, subpoenas would be enforceable. Contempt of Congress is illegal. I don’t know that they have the votes, as a political question,” Ray told The Daily Signal.

Although the president’s side likely would win, a Senate subpoena could be fought in court by Biden and others before being enforced, which could drag out the trial.

“It would take time to be adjudicated in court,” Ray said. “So the political question is, why prolong the agony? Both parties have budgeted the month of January. The president says he wants his day in court, but does he really want a long process?”