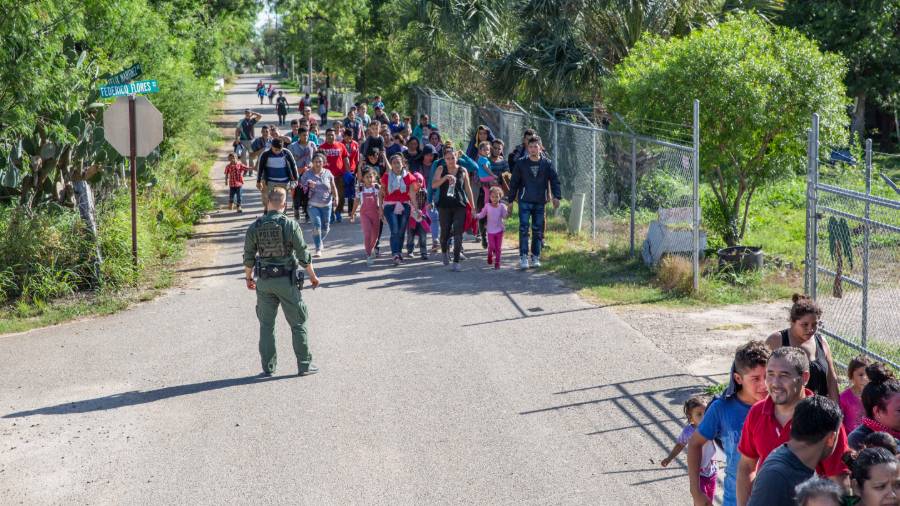 The Flores settlement, which the Trump administration is moving to close, created the loophole that results in families of illegal immigrants being released into the country after just 20 days, due to having children with them. The loophole motivated child trafficking and the creation of fake families. Pictured: U.S. Border Patrol agents encountered large groups of family units who had crossed the border illegally in Los Ebanos, Texas, on June 15.

The Trump administration is moving to close what it calls a “loophole” that has stymied enforcement of immigration laws, in a change that would allow detention of illegal immigrant minors for longer than the current 20 days.

The Department of Homeland Security will seek to terminate the so-called Flores Settlement Agreement through executive action and replace it with a new policy that allows longer detention times in order to avoid either separating families or releasing illegal immigrants into the interior of the country.

That settlement created the loophole that results in families of illegal immigrants being released into the country after just 20 days.

The administration said the new rule “will ensure alien children are safe, secure, and well cared for while in custody.”

Family units and unaccompanied minors have been the largest segment of illegal immigrants over the past year.

President Donald Trump has asked Congress to take action on the matter. “To protect these children from abuse, and stop this illegal flow, we must close these loopholes. This is an urgent humanitarian necessity,” he said.

Court rulings have expanded the Flores agreement, which has complicated border enforcement efforts. Still, the administration contends it’s fulfilling the purpose of the agreement, which is to ensure children in the government’s custody are treated with special concern.

The Flores settlement was first adjudicated in 1997, but was interpreted in 2015 to require the Department of Homeland Security to release from its custody all migrant children, even if they are with their parents.

The result is that when adults cross the border with a child, DHS is required to release the child within 20 days.

Since the parents broke the law by crossing the border illegally, the government seeks to detain and prosecute them after their asylum claims are completed. However, that usually takes more than 20 days. So, DHS has to release the children, leaving the government with the choice of detaining the parents or releasing them all.

In June 2018, with the end of a zero-tolerance policy, DHS shifted to simply releasing anyone accompanied by a child in order to comply with Flores v. Reno.

Under the rule change, some illegal immigrant families may be detained longer than 20 days, but the administration asserts that apprehension, processing, care, custody, and release of juveniles will be done with higher standards.

In a joint statement, the two wrote:

For years, Congress failed to close a gaping loophole in the immigration system that has contributed significantly to the security and humanitarian crisis on our southern border.

The U.S. should not have to choose between enforcing our immigration laws and keeping families together.

Terminating the Flores Settlement Agreement will ensure that more illegal border crossers will be processed through the legal system instead of simply being released into the United States.

This will deter future smuggling operations and weaken the incentives to exploit children for the purpose of gaining access to the country.

The Flores Settlement Agreement, which was responsible for many family separations, was the result of the [9th U.S. Circuit Court of Appeals’] judicial activism. The rule has been weaponized to create chaos and overload our immigration court system and detention facilities.

Abandoning Flores is a vital step in restoring the rule of law and moving toward an immigration system that once again works for all Americans.

Smugglers have used the loophole created by the settlement as a selling point for illegal immigrants who want to cross the border and be released into the interior of the country. In some cases, smugglers bring in “fake families,” or illegal immigrants bringing children who aren’t theirs for the sake of getting released, the White House contends.