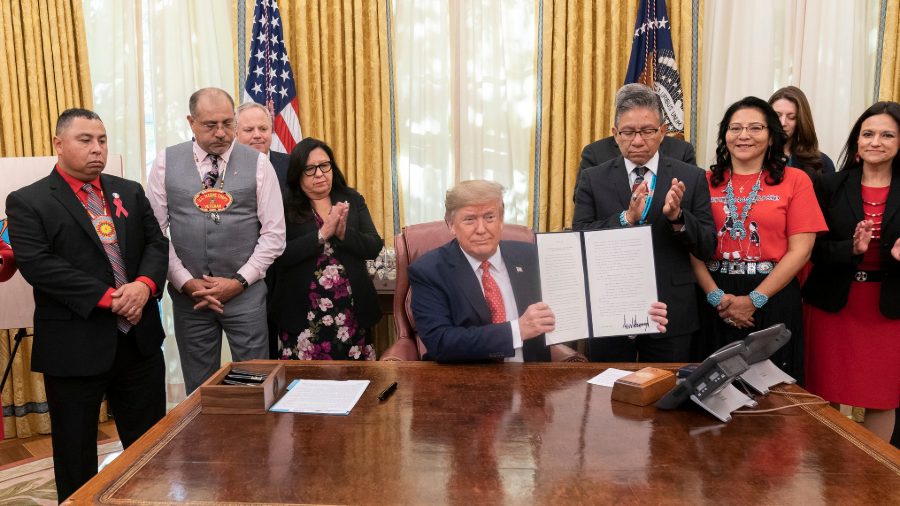 President Donald Trump displays his signature after signing an Executive Order to establish a Task Force on Missing and Murdered American Indians and Alaska Natives on Tuesday, Nov. 26, 2019, in the Oval Office of the White House.

These are some of the numbers that spurred the Trump administration to establish a task force Tuesday to tackle the underlying crimes.

“We cannot have this happening anymore,” said Melanie Benjamin, chief executive of the Mille Lacs Band of Ojibwe, a Minnesota tribe, speaking in the Oval Office. “It’s a historical day to know that our missing and murdered women have a place and a remembrance, and that we care about them and their families.”

“With Operation Lady Justice, we will bring new hope to Native American communities across the nation,” Trump said before signing the executive order. “We will deliver justice for the victims, closure for the families, and safety to those in harm’s way. And on behalf of every missing and murdered Native American woman or child, I am going to sign this order and it will be a great honor.”

The task force will be led by the Justice and Interior departments.

The Justice Department will issue grants to tribes for safety improvements. It also will engage with tribal communities on the scope of the issue and establish federal law enforcement teams to review cold cases and unsolved cases.

“It’s a tremendous problem. It’s been going on for a long time. Many, many decades,” Trump said. “The statistics are sobering and heartbreaking.”

Trump introduced other Native American leaders at the signing.

“I love this name,” the president said at one point as he invited A.J. Not Afraid, chairman of the Crow Nation in Montana, to speak.

“Mr. President, we are honored that you recognized the native nations, as well as the Crow Nation,” Not Afraid said. “We have been proponents of the Trump administration and all the endeavors.”

Trump noted Tuesday that his administration is the first to act on a long-standing problem.

“The victims and their families deserve action,” Trump said. “This should have happened many years ago.”