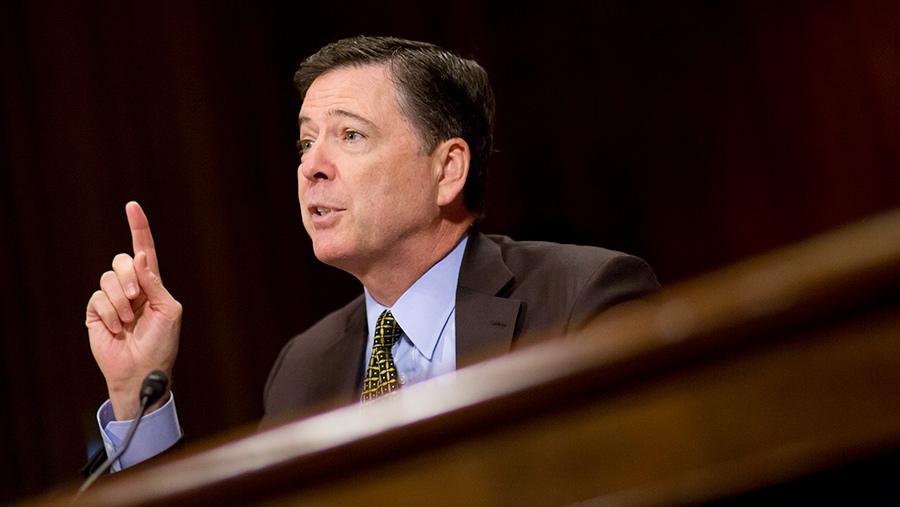 In this May 3, 2017, file photo, then-FBI Director James Comey testifies in front of the Senate Judiciary Committee during an oversight hearing on the FBI on Capitol Hill in Washington.

When Attorney General William Barr begins his examination of how the FBI “Trump/Russia” probe got started — he said on Tuesday in testimony before Congress that he’ll be looking into that — he’ll have a great jump-start: a deluge of information from others who have been doing groundwork for close to three years.

One of the newest sources is a bit more obscure than the ones we’re already familiar with, and it’s just now coming to light. This one arises from yet another FOIA case and involves numerous previously-unknown James Comey memos. It seems that, in an apparent attempt to cover his behind, Comey documented virtually everything the FBI was doing to investigate Donald Trump — the meetings, the events, the conversations and much more.

If I understand correctly, we can thank D.C. Circuit Judge James E. Boasberg — who, interestingly enough, is also a FISA judge and an Obama appointee — for asking the FBI to file an opinion about releasing the Comey memos to the public. He was asking not just whether the memos could be released, but also whether the prior sealed FBI arguments in favor of withholding them could be released.

In a filing Monday night, David W. Archey, who was the lead FBI investigator for the Mueller special counsel, said that with the end of the Mueller investigation, the existence of some of the Comey material may be acknowledged, but much of the memo content and background material from the FBI should remain under seal.

Apparently, Comey even made notes that revealed sources and methods, which, of course, are classified unless and until someone de-classifies them.

So who is David Archey? It says in this filing that he was selected by Robert Mueller in August of 2017, at the time the special counsel took over the investigation from FBI Special Agent Peter Strzok. He had worked as an FBI agent for about 17 years and was described by his colleagues as sort of a “utility man.”

When the Mueller investigation closed up shop, Archey was moved, becoming head of the field office in Richmond, Virginia.

Comey Wrote Everything Down

There are two parts to the filing. “Exhibit A” supports a continuance of a prior court order to keep the Comey background material under seal.

“Exhibit B” is the meaty part: it includes the original argument from October of 2017 that supports keeping the Comey memos under seal. This is where we learn that Comey essentially documented the whole FBI investigation as he went along. The argument was that release of any part of the Comey memos could “adversely affect the entire Russia investigation.” Since Comey was a potential witness, the memos could be considered witness statements and therefore evidence in the special counsel probe.

(News flash: The special counsel probe is over now.)

Apparently, Comey even made notes that revealed sources and methods, which, of course, are classified unless and until someone de-classifies them. Indeed, Archey argued that the memos discuss highly sensitive details such as the identities of witnesses, an investigative target, and even a confidential source, information that Comey had not revealed in testimony.

Since all of this information was likely contained in other FBI files pertaining to the “Russia” investigation, it seems probable that Comey was retaining it to cover himself if he ever needed to. Archey’s filing argues that if the extent of Comey’s note-taking were known, it might affect the testimony of other witnesses. Reading between the lines, it seems obvious that Comey wrote everything down.

Everything We’ve Been Wanting to Know

In the next section, it becomes even more obvious what Comey was writing down, and it’s all the stuff we’ve been wanting to know: who the FBI’s confidential sources where, exactly how they engaged with FISA warrants initiated by the FBI — even details about foreign intelligence sources, including the specific foreign governments and officials who were assisting the FBI (!). Archey made the case that such disclosure “could reasonably be expected to affect the United States’ relationship with those countries.”

I’m wondering: Could this be a reason why President Trump, after saying he was ready to declassify everything, pulled back? In addition to telling us what the FBI was doing, Comey’s memos might also confirm our general suspicions that officials in countries such as the U.K. and Australia (and who knows where else?) were helping the FBI (and the CIA).

In sum, in attempting to cover his own behind, James Comey may have inadvertently given us a finely-detailed picture of the inner machinations of the FBI and its collaborators as they attempted to take down Trump. This is contemporaneous documentary evidence that likely tells the entire story. The arguments in favor of keeping it under seal are part of the story as well. And now that Mueller has closed his investigation, those arguments no longer apply.

So if William Barr is ready to conduct his own investigation into the origins of the FBI investigation into Trump “collusion” with Russia, he’s got plenty to go on, courtesy of Mr. Comey. One thing he said in Tuesday’s hearing before the House Appropriations Committee made it very clear that he’s planning to do that: “I am reviewing the conduct of the investigation, and trying to get my arms around all the aspects of the counterintelligence investigation that was conducted during the summer of 2016.”

It’s highly unusual, perhaps even a first, for the attorney general to open an investigation while the inspector general is already conducting one. We knew the IG was preparing a report (Barr said in the hearing that it will probably be out in May or June), but also that he doesn’t have the power of the AG. He can’t indict, and he can’t compel anyone to testify who isn’t currently working in the government. Comey, Brennan, Clapper, Strzok, Page, McCabe, Lynch, and many more are no longer government employees, having been very justifiably fired or otherwise retired from public service. Barr carries the full weight of U.S. law enforcement, and he can go much broader.

Partisan critics will never be satisfied. Barr knows it and doesn’t care. Steady as a rock, he’s just doing his job and doing it right.

On Tuesday, Barr was treated shamefully, even abusively. Outside the hearing, Sen. Chuck Schumer flat-out accused him of being untrustworthy. Inside, Democrats accused him of lying about the Mueller report to make it seem less damaging to the President. (This was supposed to be a budgetary hearing.) I would imagine Jerrold Nadler (Judiciary) and/or Adam Schiff (Intelligence) had met with committee members before the hearing and handed them prepared statements to read for the record that had nothing to do with appropriations.

Barr has gone absolutely by the book in his dealings with the special counsel, only to be given grief about not taking enough time in formulating his conclusions and taking too much time in releasing the report. Partisan critics will never be satisfied, and he knows it and doesn’t care. Steady as a rock, he’s just doing his job and doing it right.

In related news, when I wrote about Devin Nunes’ preparation of eight criminal referrals to send to Barr, the most common reaction I got was “What, only eight?” Of course, I had quoted Nunes as saying there might be as many as two dozen before he’s through. North Carolina Rep. Mark Meadows reiterated this in a tweet, saying there will be “more criminal referrals to come. And certainly more deserved. Overwhelming evidence shows multiple FBI + DOJ executives abused their power to undermine a duly elected President Trump. They will be held accountable.” We’re getting there.