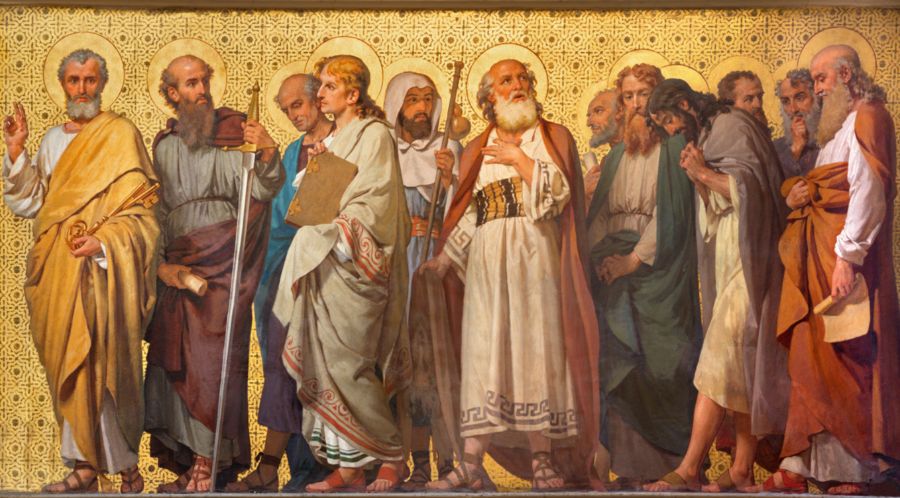 A fresco of the twelve apostles, leaders of the early church in the book of Acts, by Enrico Reffo (1914) in church Chiesa di San Dalmazzo in Turin, Italy.

There is no doubt that Christianity does not enjoy the esteem and influence that it once did in this part of the world. No doubt there are many who would love to make Christianity great again. This being so, there is an event recorded in the book of Acts which should be cause for reflection.

To understand the importance of this event, we will want to go back to the Old Testament. Let’s go back to Genesis where God called Abraham and made two key promises. The first was “I will make you into a great nation” (12:2 NLT). The second was “All the families on earth will be blessed through you” (12:3 NLT).

Reading through the Old Testament, therefore, we might get the impression that the focus is almost entirely on the first promise to Abraham, of making him into a great nation. The other promise, of all nations being blessed, for the most part seems to fall off the radar.

The Promise of Jesus

Enter Jesus. The attitude of people toward Jesus, as they considered whether he was the Messiah or not, could be summed up with the question: “Is this the one who is going to make Israel great again?”

God’s old covenant people had been through a lot including exile and the return from exile. They continued to face hard times as they had been under foreign rule quite often since the return from exile, and were now under the thumb of the Romans. Perhaps Jesus is the one who will fix this Roman problem and bring them back to being a sovereign nation? The mood in the air pointed to a focus on the first promise of making Israel great. Even the apostles were caught up in it when following his resurrection,

… the apostles were with Jesus, they kept asking him, ‘Lord, has the time come for you to free Israel and restore our kingdom?’ (ACTS 1:6 NLT)

He replied, ‘The Father alone has the authority to set those dates and times, and they are not for you to know. But you will receive power when the Holy Spirit comes upon you. And you will be my witnesses, telling people about me everywhere — in Jerusalem, throughout Judea, in Samaria, and to the ends of the earth.’ (ACTS 1:7-8 NLT)

The Promise of Blessing

The Holy Spirit did indeed come upon a great crowd of people which we can read about in Acts, Chapter 2. But all these people, though coming from different nations, were part of God’s old covenant people. The idea of making Israel great again could still linger, the promise of blessing all the families of the earth could still be largely off the radar. Until we get to Acts, Chapter 10. Here Peter had a rather “un-Jewish” vision, while Cornelius, a non-Jew had an angel visitation resulting in the invitation of Peter to the home of Cornelius, another rather “un-Jewish” thing to happen. Peter then spoke to them about Jesus, and,

as Peter was saying these things, the Holy Spirit fell upon all who were listening to the message. The Jewish believers who came with Peter were amazed that the gift of the Holy Spirit had been poured out on the Gentiles, too. For they heard them speaking in other tongues and praising God.

Then Peter asked, “Can anyone object to their being baptized, now that they have received the Holy Spirit just as we did?” So he gave orders for them to be baptized in the name of Jesus Christ. (ACTS 10:44-48 NLT)

If there was any doubt before, there was no doubt now, that Jesus’ purpose was not about making Israel great again, but about making the world great at last, fulfilling the promise to Abraham that “All the families on earth will be blessed through you” (Genesis 12:3 NLT).

This fulfillment of the promise challenges us in our desire to make Christianity great again.

Let’s remember that while the Jews hated being under Roman rule, most nations, and many Jews, could see the benefit of Roman rule. New roads were built along with new buildings and facilities like gymnasiums. And there was the “peace of Rome.” Nations under Roman rule, and there were many, could count on protection from attack, both from beyond and from within the empire. The Roman army would intervene, and it was a very good army.

While Rome brought peace, it did so, as at least one Bible teacher has pointed out, by “the power of the cross.” Rome ruled and kept peace through the use of brute force and brutality. The empire had peace, but it was an ugly empire, with an ugly, and precarious, kind of peace. In contrast, Jesus brought a different kind of peace, a beautiful lasting peace with God and others. Jesus brought peace by the power of cross, but it was not peace won by brute force and brutality, but rather peace won by love, grace, and forgiveness.

Through Jesus, God was not making Israel great again by making it like Rome as some had hoped. Rather, through Jesus, and the gift of the Holy Spirit, God was, and still is, inviting everyone to the Kingdom of God. This is a good kingdom, one of love, justice, and goodness.

Clarke is the pastor of Calvary Baptist in Cobourg, Ontario. He blogs at clarkedixon.wordpress.com. Originally published on Clarke’s blog. Reprinted with permission.

The Great Shrinking Church in America