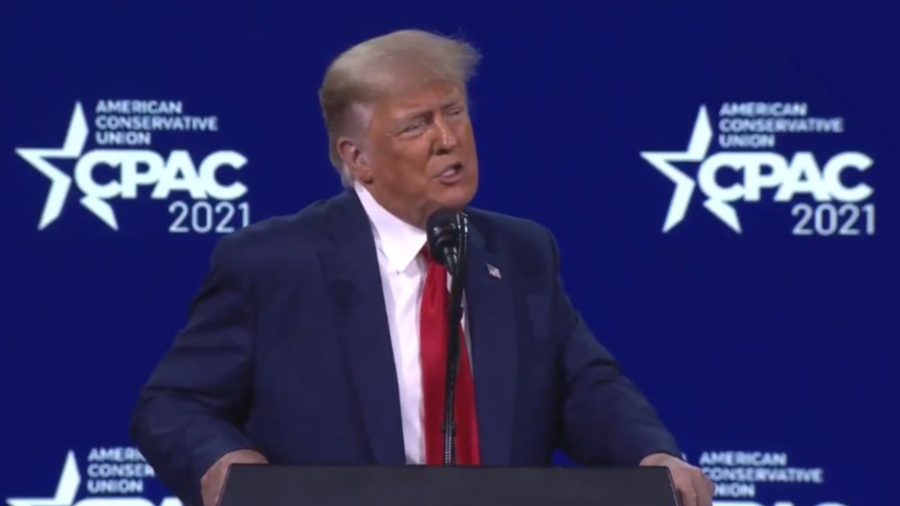 I’m seeing some encouraging signs of life on the right, with more conservatives fighting back against the left’s assumption that they get to play Big Brother and determine the limits of our conversation. As long as we stick to facts — not facts as determined by leftist “fact”-checkers but real, verifiable information — it’s time to fly over the target and bomb away. Especially, we need the courage to ask questions and demand real answers. That’s true most of all when it comes to the 2020 election.

President Trump Will Not Self-Censor

Former President Trump is right out in front on this and sets a great example. He does not care what the left says about him, and this weekend, he spoke out in Phoenix at Turning Point USA about cancel culture and the need to speak up about the election. Self-censoring is exactly what the left wants us to do. Regardless of what we’ve been able to determine thus far about the security of Dominion Voting Systems, there’s much that leftists did to turn the 2020 election into a legal and logistical — and unverifiable — mess, and much they continue to do to keep us from looking at it.

But Trump said — and he’s right — that they won’t be able to avoid it. They talk in general about banning speech, “but what they don’t want…is anything having to do with the 2020 election.”

Sidney Powell is a Fighter

Another fighter who refuses to be cowed is attorney Sidney Powell, best known for representing another deeply-wronged individual, Michael Flynn. We don’t see much of Powell on TV right now because of legal saber-rattling by Dominion Voting Systems, which is acting on the theory that the best defense is a big, blustery offense. But that’s okay; the legal stuff will work itself out, and it might actually be better for Powell to fly mostly under the radar right now.

Readers have asked what she’s up to, though, and I’m happy to be able to answer that question, at least partially. Powell happens to be in the news this very day, concerning a desperately important matter: the treatment of those who “breached” the Capitol Building and are still being held without bail.

Last Thursday, conservative radio host Pete Santilli announced on his show that Powell will be involved in helping the January 6 detainees, who are called “political prisoners” by many (who have a point). Another attorney on the team, Cynthia Hughes, made the same claim on Steve Bannon’s show. “She [Powell] is really, really, really gonna get behind us,” Hughes said.

The announcement essentially coincided with the release of a letter from a member of the Proud Boys on the three-month anniversary of being locked up. I will not in any way defend the Proud Boys, who are labeled by the media as being neo-fascist and leaning in to white supremacy. But even if they are as evil and they have been reported to be, its members are still protected by the Constitution and are innocent until proven guilty and are guaranteed due process and not subject to unreasonable “search and seizure.”

I’ll leave it up to you to determine if the treatment of this person is reasonable. It’s bad enough that he and others are being held without bail, but his description of the conditions he faces is shocking. “My body feels as if it’s aged so much,” he writes, as he can’t work out and suffers a lot of back pain. He sleeps on a thin mattress on a piece of steel welded to the wall. He gets very little protein to eat — there’s some kind of soy-based “gelatin dog food looking stuff” — and feels himself weakening, saying he can hardly walk.

Also, there is no privacy, ever, he says; even going to the bathroom is in full view. He has one small window in the cell, but it’s sandblasted to be opaque, so he can never see the outdoors.

If you break any rule, he says, they put you in a brightly lit, freezing room, naked. Now he has panic attacks, “so bad I black out.”

He says he spends most of his time alone, reading the Bible and other Christian books.

The plus side to this [is] God was able to get ahold of me in this place, he writes. In the end I just pray people see the truth. I had nothing to do with that day. I never planned what happened. I was in the wrong place at the wrong time.

The man’s name is Joe Biggs. (In fact, he signed his letter “Joe Biggs, political prisoner.”) He’s a retired Army staff sergeant, a two-time Purple Heart recipient, and described by another of the Proud Boys as a “war hero” who served in Iraq and Afghanistan. He’s also an online personality. If you know the story, Biggs is the man who simply walked in, took a few selfies to document his peaceful protest of what he believes was a stolen election, asked a security guard if he could use the restroom and was directed to it, used the restroom, and walked out.

He’s been in a cell in Florida’s Seminole County Jail for three months. If the report of what he did is accurate, and I’ve seen nothing to the contrary, this man shouldn’t even have been detained, let alone held without bail. The left has gone so far that we can’t even recognize our country. This is why we can’t be silent any longer.

Headed to the DOJ With Unanswered Questions

Mark Tapscott in The Epoch Times has a story about four GOP members of Congress — Matt Gaetz of Florida, Louis Gohmert of Texas, Paul Gosar of Arizona, and Marjorie Taylor Greene of Georgia — taking this issue to the door of the “Justice” Department Tuesday. They have questions for law enforcement authorities about what they knew and when, and why Congress wasn’t told. They also have “unanswered questions relating to the treatment of January 6 prisoners.”

For several months, they’ve received no response from Attorney General Merrick Garland. (The only bright spot about having this political hack as attorney general is that I get to thank my lucky stars he didn’t get on the Supreme Court.) His failure to provide answers is why they’re headed to the DOJ in person. Texas Rep. Gohmert, in a statement, compared what has been done to these detainees to what is done in “tyrannical third-world countries, not the United States.”

So, at least some Republicans have a spine. It’s time to join them, and speak out in every way we can.