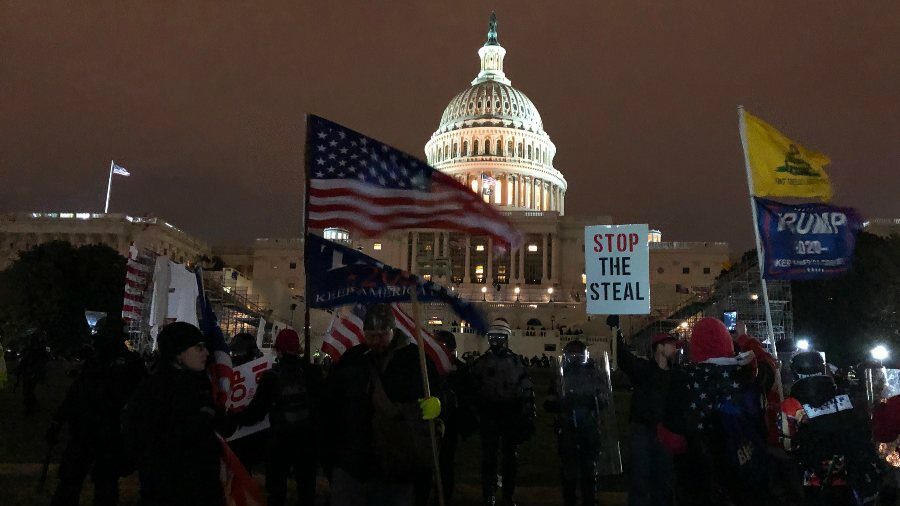 A few people who really are journalists are wondering why we still haven’t been given an official cause of death for Officer Brian Sicknick.

An Astounding Lack of Curiosity

Recall that Sicknick, 42, was the Capitol Hill police officer who, according to initial reports of the January 6 breach of the Capitol Building, was fatally struck in the head with a fire extinguisher. Witnesses said he was taken out on a stretcher, a bloody gash on his head. “Journalists” later reported sensationally that Sicknick, a 12-year veteran of the force, had been attacked by the pro-Trump mob and beaten to death with a fire extinguisher.

But the witnesses were wrong, and so were the journalists who reported this over and over. Yes, sadly, Sicknick died late the next day, but we know he did not suffer an injury to his head. This kind of early misinformation is typical; initial reports of chaotic events are almost always way off the mark. But it’s been three months. And there seems to be an astounding lack of curiosity among the news media concerning what really ended Sicknick’s life.

A few are expressing concern. Stacey Matthews at Legal Insurrection has a new piece that dares to ask the question, why has the chief medical examiner in DC still not released the details of how Brian Sicknick died, and told us more about Ashli Babbitt’s death as well?

Five people who were on Capitol Hill during the rally ended up dying. As Matthews reports, Washington, DC, Chief Medical Examiner Dr. Francisco J. Diaz has determined that Kevin Greeson, 55, and Benjamin Phillips, 50, died from natural causes, in both cases heart attacks. Roseanne Boyland, 34, died of “acute amphetamine intoxication.” (The New York Times had monumentally screwed up by originally reporting that she was “killed in a crush of fellow rioters during their attempt to fight through a police line.”) Ashli Babbitt, 35, died of a gunshot wound to her left shoulder; recall that she was shot by a member of Capitol Hill security.

As for the details surrounding her homicide, we don’t have those, either. As another real journalist, Glenn Greenwald, tweeted,

…not only have there been no investigations released or facts given about what the DC Medical Examiner is calling the ‘homicide’ of Ashli Babbitt — who was unarmed — they still have not even released the name of the officer who fatally shot her in the neck at close range.

Gosh, could it possibly be that the media don’t want to be bothered when facts get in the way of their chosen narrative? Julie Kelly at American Greatness says that’s the case in an opinion piece called “Media, Politicians Still Spreading the ‘Big Lie’ about Officer Sicknick.”

Just hours after Sicknick died on January 7, the Capitol Hill Police Department issued a statement saying he had:

passed away due to injuries sustained while on-duty. Officer Sicknick was responding to the riots on Wednesday, January 6, 2021, at the U.S. Capitol and was injured while physically engaging with protesters. He returned to his division office and collapsed. He was taken to a local hospital where he succumbed to his injuries.

Surprisingly, even the Washington Examiner passed along the premature conclusion that “Sicknick died as a result of injuries sustained in the riot.” We found that wording in a story about the two Capitol Hill officers who committed suicide days after the riot. This is what happens in the media world; news outlets just keep picking up what others have reported, whether it’s accurate or not.

Well, we won’t forget, either, how the Democrats exploited the as-yet unexplained death of a police officer for their own political gain.

Sicknick’s death was certainly exploited to further the narrative of a deadly pro-Trump mob. His body lay in state in the Capitol rotunda. Kelly describes this as “a somber memorial attended by Joe Biden and his wife and well as lawmakers from both political parties — the weekend before House Democrats launched their second impeachment trial of Donald Trump.”

After that, his remains were transported to Arlington Memorial Cemetery for another public ceremony attended by House Speaker Nancy Pelosi, Senate Minority Leader Mitch McConnell, and Republican congressional leaders.

By the way, the trial memorandum from Trump’s impeachment still includes the allegation that “the insurrectionists killed a Capitol Police officer by striking him in the head with a fire extinguisher.” Ah, but it cites evidence: the (incorrect) January 8 story in The New York Times. They were using this to construct a narrative: that Trump had incited murder.

Three Months Have Passed. Why the Delay?

Three months have passed since Sicknick’s death, and the DC Medical Examiner’s Office still isn’t disclosing the cause. A spokesperson for his office said in an email to American Greatness,

The…medical examiners comply with the National Association of Medical Examiners’ (NAME’s) standard to determine the cause and manner of death within 90 days; however, for cases that are more complex, it could be longer.

Kyle Becker at Trending Politics wonders about the delay as well, and also the fact that whoever shot Ashli Babbitt still has not been identified.

As long as they drag out releasing Sicknick’s cause of death, the media can continue with their story that he died in the line of duty and it’s all Trump’s fault. There is no evidence of this at all. Sicknick apparently seemed okay to his co-workers later that day when he returned to his office. Family members said they spoke to him that night and he seemed fine. His mother told the Daily Mail in an exclusive interview that she thinks he died of a stroke.

This is an excellent report, with a detailed timeline. As told here, Sicknick’s mother was “unequivocal in her assertion that Officer Brian Sicknick was not struck on the head and as far as the family knows her son had a fatal stroke.”

“He wasn’t hit on the head, no,” she said. “We think he had a stroke, but we don’t know anything for sure. We’d love to know what happened.” But it seems the only story they’ve heard is the one Democrats find useful.

Another possibility is that he had a delayed reaction to the capsaicin in pepper spray or bear spray. He texted his brother the evening of the 6th, and told him, “I got pepper-sprayed twice.” The brother said he was “in good shape.”

On January 8, Sicknick’s father told Reuters that on the 7th, as they rushed from their home in New Jersey to the DC hospital that had placed him on a ventilator, they were told he’d suffered a stroke and had a blood clot on his brain. He died before they could get there.

The family didn’t want his death politicized, but as the Daily Mail reports,

Less than 24 hours after his death, with no autopsy, no confirmation of any sign of blunt trauma, no investigation nor due process…Pelosi called for the ‘perpetrators’ of Sicknick’s ‘attack’ to be brought to justice and vowed, ‘We will not forget.’

Well, we won’t forget, either, how the Democrats exploited the as-yet unexplained death of a police officer for their own political gain.