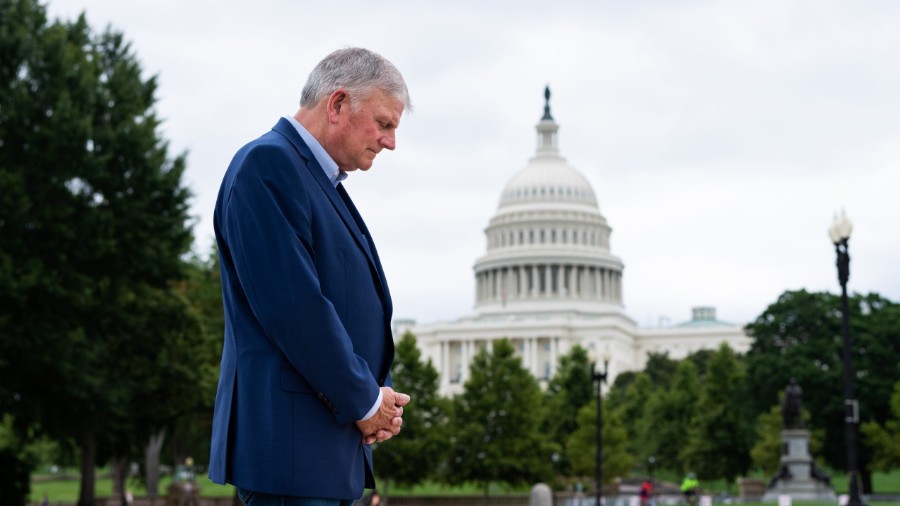 By Bernadette Breslin Published on September 24, 2020 •

Thousands of people are expected to convene in Washington, D.C., Saturday for Franklin Graham’s inaugural Prayer March, according to organizers.

Franklin Graham, son of the American evangelist preacher Billy Graham, announced on Twitter his spearheading of the Prayer March on Aug. 8, calling it a necessary event for a nation “in trouble.”

I’m announcing today that on Sept. 26, I’m going to be in our nation’s capital to pray—& I hope thousands of families, pastors, & churches will join me! Our nation is in trouble, & we need God’s help. Make plans now to come for #PrayerMarch2020. For more: https://t.co/XSqMiRVUlM pic.twitter.com/9BpvpmV6z4

“There are lots of loud voices these days,” Stephen Rhoads, vice president of church ministries for the Billy Graham Evangelistic Association, told The Daily Caller News Foundation. The group wants to “have a peaceful, holy moment of consecration and repentance to heal our land,” said Rhoads.

Stephen Rhoads told The Daily Caller News Foundation that interest in the Prayer March ranges as far as Puerto Rico. Christians plan to “organize their Prayer March locally” if they cannot attend Saturday’s event in D.C.

“There will be no microphones or audio amplification” during Saturday’s march, according to the Prayer March’s official website. Rhoads and the Billy Graham Evangelistic Association intend for this to inspire “silent prayer” in attendees, the website explains.

The Prayer March will consist of seven stops around the National Mall with each having its own “prayer focus,” according to the march’s website.

The stops were announced last month on the march’s website with the seventh stop designated for prayers at the U.S. Capitol for the Supreme Court.

Rhoads said that the seventh stop is significant after the Friday death of Ruth Bader Ginsburg, who was “inspiring in a lot of ways.” Here, the Prayer March attendees will “pray for her family,” Rhoads told The Daily Caller News Foundation.

The Prayer March comes amid ongoing civil unrest in America over the deaths of George Floyd, Breonna Taylor, and others. However, Rhoads told The Daily Caller News Foundation that “The energy has been mostly positive,” describing people’s attitudes towards the march.

Rhoads told The Daily Caller News Foundation that he is hopeful for Saturday’s Prayer March, saying, “God’s people are reliable.”

Time for a Massive Reset in the Evangelical Church in America

California, Have Our Consciences Been Seared?