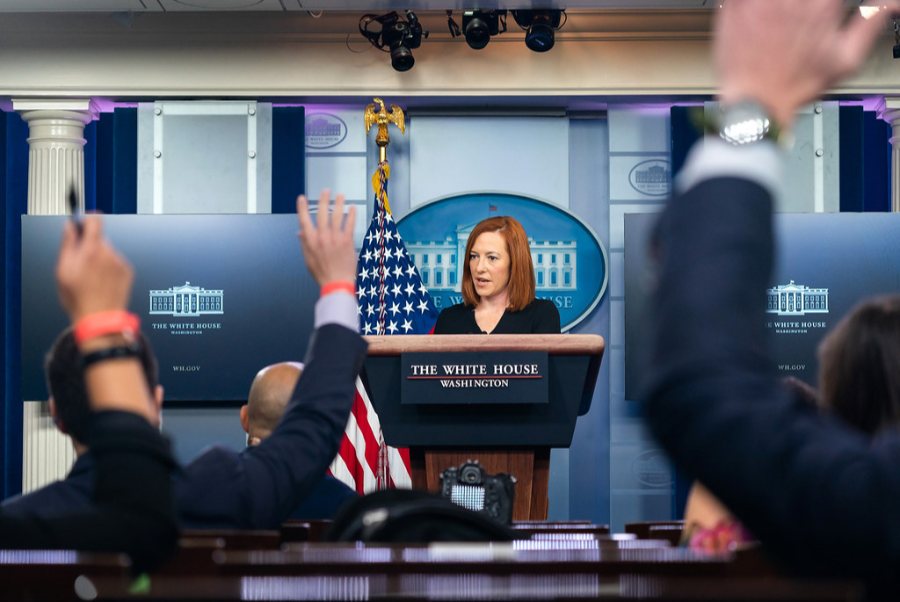 Transparency. In the current environment, it’s what the American people need and deserve, at a moment when, on many fronts, we’re getting the opposite. The shades are drawn and the doors slammed shut.

Transparency? In the New Administration — It’s a Joke

First, let’s take the issue of transparency within the new administration. It’s a joke. White House press secretary Jen Psaki said on January 20, the day President Biden was inaugurated and her first day on the job, that Biden planned to “bring transparency and truth back to the government to share the truth, even when it’s hard to hear.” She also told reporters that she has a “deep respect for the role of a free and independent press in our democracy.”

Note the propagandistic wording. By saying Biden planned to bring transparency and truth back, Psaki implied that Trump had made his administration less transparent and truthful. That is a lie. One of the main things we as his supporters appreciated about him was his candidness.

Transparency. In the current environment, it’s what the American people need and deserve, at a moment when, on many fronts, we’re getting the opposite.

Trump would stand outside the White House and answer reporters’ questions for as long as they cared to ask them. Can anyone even imagine President Biden doing the same, or even being able to stand up to the kind of abusive questioning Trump received? (We’ll never know, because he won’t be subjected to it.)

Trump wanted information declassified and the doors flung open to what our FBI, CIA and State Department were up to during the 2020 election and his transition in 2021. They fought him at every turn. Trump wanted a transparent election process in 2020 and the aftermath. Think that’s what he got? Yet Jen Psaki has the gall to say Biden is bringing transparency back.

In answer to a question during a February 2 press briefing, Psaki also said that there has been no discussion about whether to release details of the virtual meetings.

Way to be transparent, folks.

Putting Pressure on the Administration

As reported by The Epoch Times, more than a dozen organizations and political transparency groups have been putting pressure on the administration to disclose information about virtual logs and other information.

Here’s one example, a letter written to White House counsel Dana Remus by a group called “Open the Government,” on behalf of a host of these organizations.

They request a meeting with the administration to discuss their recommendations, which include making visitor logs available and searchable, modernizing records management systems, and restricting the use of disappearing message apps for government business.

Wait just a doggone minute — they use DISAPPEARING MESSAGE APPS FOR GOVERNMENT BUSINESS??

Well, now we can see how dedicated the Biden administration really is to promoting transparency. In another example, from Monday, Psaki completely dodged a reporter’s question asking her to respond to President Trump’s comment during his CPAC speech that “President Biden sold out America’s children to the teachers’ union.” We can tell how interested the new administration is in transparency by the way she responded:

“I think we’re going to do, ugh, spend more of our time focused on communicating about our agenda for the American people than responding to criticism from the former President.”

What About the Nov. 3 Election?

Finally, let’s look at one more area in which we’re just not getting transparency: the November 3 election. Anyone trying to get answers, especially through the courts, is doomed to disappointment. On Monday, the Supreme Court once again shut down calls for a closer look, dismissing Sidney Powell’s two petitions for writs of mandamus challenging the election results in Wisconsin and Arizona.

One of Powell’s petitions had stated, “A submission directly to this Court seeking an extraordinary writ of mandamus is unusual, but it has its foundation. While such relief is rare, the Court will grant it ‘when a question of public importance is involved, or where the question is of such a nature that it is peculiarly appropriate that such action by this Court should be taken.’”

Sounds appropriate to me. More details are in the report; it’s part of The Epoch Times’ “premium” news service, but we highly recommend this if you haven’t yet subscribed.

Powell is still trying to get forensic examinations, saying that by federal law election records are to be kept for 22 months. She maintains that the evidence would be forthcoming “if anybody would issue an order allowing inspection of the machines.” She said Monday that she “cannot begin to describe” how upset she is that the courts have not actually reviewed the evidence.

“It’s incomprehensible,” she said. “There is no rational explanation for not applying the law.” Well, it’s been clear for a while that the Supreme Court does not want to touch the 2020 election. University of California at Irvine Prof. Rick Hasen speculated on February 22 that the Trump cases are “somewhat radioactive” (somewhat?) at the Court and that “the case would become a further vehicle to argue that the election results were illegitimate.”

Just by looking at the evidence? That would imply that there might be something to the evidence.

We don’t know what the evidence might show, because nobody will look at it. We just know that a process that should be completely transparent remains the very opposite of that. Justices Thomas, Gorsuch and Alito understand the danger to our system, the lack of trust caused by this, but all they have the power to do is write dissenting opinions.

Of course, Big Tech is in on the plan to stop transparency as well, by preventing the free flow of information and labeling anything that doesn’t promote the official narrative “misinformation.” The January 6 Capitol Hill breach was used as an excuse to suspend the accounts of a number of conservatives, including Powell, for daring to challenge the election results. Powell received no warning. Both she and Lt. Gen. Mike Flynn had their Twitter accounts permanently suspended.