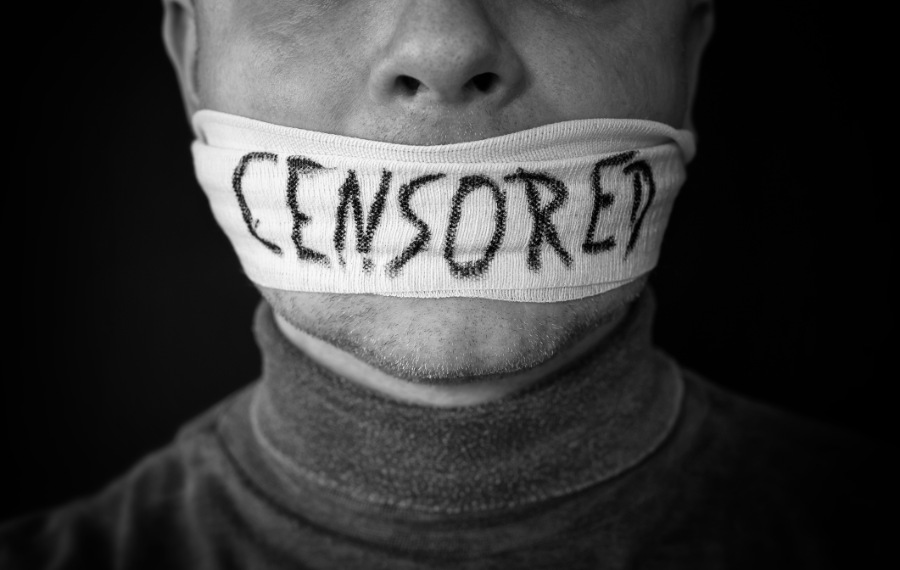 Why does the left want to silence conservatives? Why do rank-and-file Democrats go along with this abomination? Leftists have bad intentions, but how about the Democrats who enable them? I prefer to think they’ve being manipulated.

As worried as we should be about the hyperexploding national debt and our inevitable fiscal catastrophe, I am even more worried about the left’s success in turning America into a police state (ironic, given its simultaneous war on the police).

People still able to summon their rational faculties during this pandemic have to be concerned about this insane, concerted effort to control people’s thoughts and speech. How can those who purport to rage against the fascism of former President Donald Trump, which was an abject Democratic and media myth, promote actual fascism in our culture?

A Threat to Our Speech

It strains the mind to imagine that fair people can deceive themselves into believing that silencing and canceling people for “offensive” views is consistent with our liberty tradition. Some rationalize that because government is not the moving agency in this censorship, and because the Constitution only restricts state action, not that of private entities, there is no violation of our constitutional principles.

They can lie or fool themselves, but don’t let them fool you. Let’s not pretend that this consortium of overblown, unaccountable digital oligarchs does not represent an equal threat to our speech. If you can live with censorship by these immensely powerful companies, then you don’t believe in the spirit of constitutional liberties. They are just nice-sounding platitudes — a means to justify their end of gaining control over the people.

The Left’s Plans to Silence and Control Conservatives

The left has been quite strategic in its sinister plans to silence and control conservatives. If it could sufficiently demonize us, it could emasculate us as effective opponents of its agenda.

Leftists have laid the groundwork for decades, along with their other extremist ideas they are now peddling as mainstream. They’ve persistently hammered the narrative that conservative speech is inherently hateful and inciteful, leading people to violent behavior. They’ve framed mainstream conservative ideas and speech as racist, bigoted, homophobic, devoid of compassion and hateful.

More Powerful Than Ever

Some conservatives naively claim the left has so overdone the race slander that it has lost its effectiveness and no longer warrants a response. How can people be so oblivious? The smear is more powerful and malleable than ever. Leftists have exploited it to drive their open-borders policy — essentially arguing that America is the first nation in the history of the world that doesn’t have a right to control its own borders and pretending it could survive if it were to give up that control.

They’re using it to advance socialism, arguing that our “racist” past requires us to scrap the founding principle of equality of opportunity and replace it with “equity,” a euphemism that means guaranteed equality of outcomes. Equality under the law and equality of opportunity mean nothing anymore, nor does justice, whose meaning has likewise been perverted in service to the leftist cause. Justice is now social justice, which also means cashiering principles of equality in favor of forcing equal outcomes. “White privilege,” critical race theory and “systemic racism” are part of the same mix. The racism smear has even found its way into climate change and pandemic politics. It’s embarrassing how mind-numbed we’ve become.

Disgracefully, this censorship crusade is being pushed by the very people who have a particular duty to safeguard free speech, i.e., the mainstream media.

In order to credibly argue that we need a fundamental reordering of our constitutional and judicial systems, leftists must show that America is irredeemably drenched in the sin of racism and can only expatiate itself through the atonement of socialism, reparations, guaranteed universal income, outright wealth redistribution and the rest.

This is why I keep saying the endless vendetta against Donald Trump is not primarily about Donald Trump. He is a convenient scapegoat to taint the entire conservative movement. If they can succeed with their preposterous claim that the 74 million Trump supporters were accessories before the fact to the few hundred or so people who stormed the Capitol, then they’ve made a prima facie case that conservative ideas — and conservative speech — are intrinsically hateful and dangerous. What’s the big deal, after all, of silencing “domestic terrorists”?

It’s hard to say I’m exaggerating, when a movement to destroy NFL icon Tom Brady because he won’t denounce Trump is commonplace. Disgracefully, this censorship crusade is being pushed by the very people who have a particular duty to safeguard free speech, i.e., the mainstream media. Did you see that CNN’s Brian Stelter — the network’s ostensible media watchdog, no less — is freely claiming that cable providers should drop Fox News? Stelter has the audacity to assert that this isn’t about freedom of speech but “freedom of reach.” So, the adaptable left is employing yet another euphemistic sleight of hand to marshal the private sector to shut down its political opposition.

What are these leftists afraid of? The fact that Stelter — and he’s just one of many — even wants to chill our speech, whether through public sector or private sector means, is, well, chilling.

Will Grassroots Democrats Shut Down Conservatives?

I am willing to give many grassroots Democrats the benefit of the doubt in assuming they don’t believe that their movers and shakers and digital and media consorts are trying to force uniformity of thought by silencing conservatives. But if present trends continue, they’ll have no reasonable grounds to deny the obvious. I would prefer to think that most Biden supporters would oppose using the awesome powers of digital media, mainstream media, government, academia, cultural shame and other methods to shut down conservatives, but only time will tell — a very short time.