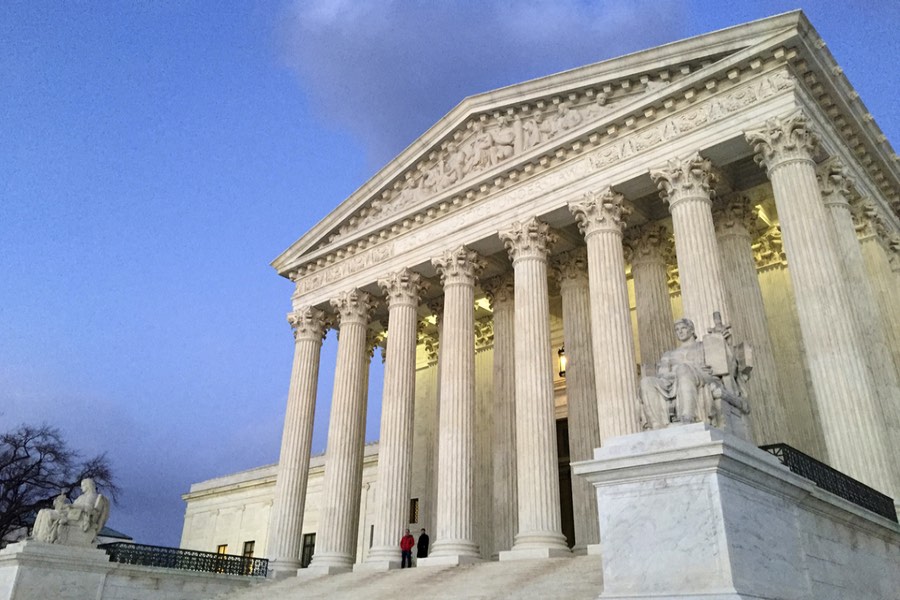 Kelo v. City of New London is the nadir of Supreme Court cases regarding property rights, especially for conservatives. A narrow 5-4 decision recklessly expanded the scope of eminent domain. It allowed private developers and the government to collude and forcibly take private property away from citizens for “public use” under the Takings Clause of the Fifth Amendment. Now the Court is faced with another landmark case on property rights that will once again be a defining moment for conservatives.

Patent and Trademark Appeals Board

Oil States Energy Services, LLC v. Greene’s Energy Group, LLC (Oil States for short) asks the court to decide the scope and power of the Patent and Trademark Appeals Board (PTAB).  At issue is whether this unaccountable government agency can extra-constitutionally extinguish “… private property rights through a non-Article III forum without a jury.”  The PTAB (part of the Patent and Trademark Office) was created to provide another venue for challenging the validity of patents.  This extra-judicial system has allowed ideology driven decisions to invalidate pre-existing patents, as in the case of Oil States, in clear violation of the patent holder’s property rights.

Last month, dozens of conservative leaders issued a “Memo for the Movement.” It called for an innovation and economic competitiveness agenda that included the need for stronger patent protections, including the need to reign in the out-of-control PTAB. The memo described “an administrative tribunal created after previous congressional reform and has been labeled a ‘patent death squad’ with the sole purpose of invalidating patents.”

Since its inception, the PTAB has become a rogue agency trampling on the rights of patent holders, invalidating a very high percentage of patents. Officials have even embraced the moniker of it being a “death squad for patents.” Virtually anyone can challenge a patent, multiple times and patent holders have fewer rights to protect them.

The Danger to Property Rights in Patents

I joined with numerous conservatives in an amicus brief in this case. The brief noted the PTAB, may “cancel existing patents irrespective of when they issued, how many times they have been upheld in the courts, or even how many layers and rounds of review they have survived within the Patent Office itself.”

An overzealous regulatory agency may be old news to many of us. But the PTAB presents a clear constitutional problem. This agency endangers the court’s role in reviewing patent property rights as it can essentially overrule court decisions, upholding patent rights.  As we wrote in the Amicus, “Not only does this approach undermine the valuable property rights in patents, it destabilizes the delicate balance between the three branches of government.

The administrative state cannot be allowed to extend this far, and the Court should, by reversing the decision below, take the opportunity to set firm limits on Congressional attempts to expand the power of the political branches at the expense of the federal judiciary.”

The regulatory uncertainty caused by the ideological agendas of entities like PTAB has endangered American innovation and competitiveness. Not long ago, America was the world leader in invention and risk taking, thanks to the concept of patent rights as property rights being enshrined in our constitution. The idea of ownership of invention and innovation, coupled with the legal rights to that ownership, is unique in the world. It gave us a competitive edge. But over time, bad policies and court decisions have eroded our IP protections and have added uncertainty to the concept of patent and property protections.

The US Chamber of Commerce’s Global Intellectual Property Center has been tracking this fade in our global standing. In their most recent International IP Index, the U.S. dropped from number one globally to number ten when it comes to the protection of “patents, related rights and limitations.” For the first time ever, another nation would sit at the top of this ranking. Complacency and ideological agendas have undermined our patent rights, and in doing so, undermined the United States of America. While America’s innovation edge has declined, others — including China — has risen.

Once again, the Supreme Court is faced with a case that could vastly change the scope of our property rights. Just as Kelo granted private developers and local and state governments vast new powers with eminent domain, Oil States could enshrine the radical expansion of powerful bureaucratic agencies to undermine patent protections and to undermine patents as a fundamental property right.

Continuing on this path may guarantee America’s decline as the global leader in innovation and property rights.

Ken Blackwell is a member of the Policy Board of the American Civil Rights Union. He was a Domestic Policy Advisor to the Trump Presidential Transition Team.