The Death of Truth, Morality and Reason 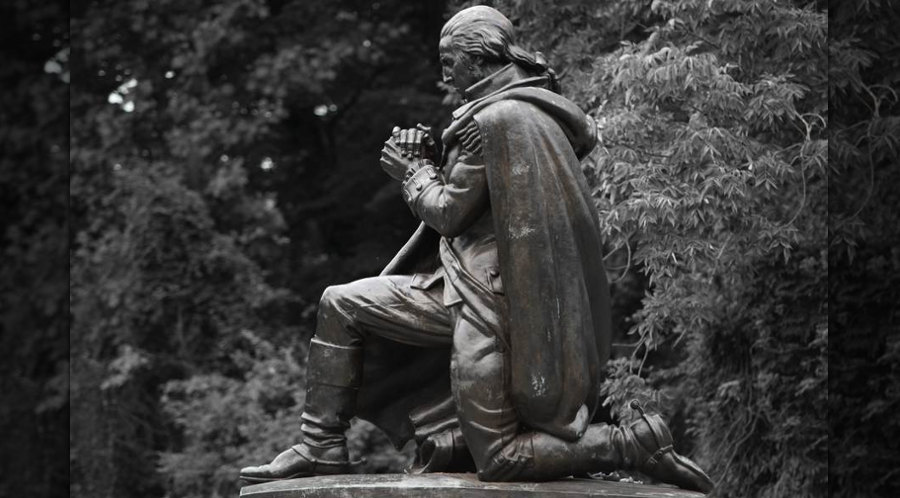 Statue of George Washington at Prayer

Editor’s note: Dr. Zacharias is sharing his thoughts again today on LIFE Today in part two of “Your Freedom, Your Future,” which you can see here.

Years ago, Francis Schaeffer and C. Everett Koop penned their book, Whatever Happened to the Human Race? It was a book that warned of the decisions that were being made within a culture stepping into new and terrifying terrain. They saw clearly where we were headed. We are now there.

I narrow that title down to what is happening on the home front here in America.

Listening to the blistering political rhetoric, I am asked all over the world, “What has happened in America?” The question should go deeper. Whatever happened to the American soul? We are truly at the cliff’s precipitous edge and the fall could be long and deadly. Why? We have a deep crisis of the soul that is killing us morally and we have no recourse. We have no recourse because the only cure has been disparaged and mocked by the elite and the powerful. And those very ideologies are now presiding over the slaughter of our citizens while the abundance of speeches is inversely proportional to the wisdom they contain and Reason bleeds to death before our eyes.

These may be strong words but I am staggered by all that is happening around us while the powerful fiddle and bodies litter the floors of offices, airports and even restaurants. How many families will be shattered and offered up at the altar of our foolishness?

Let me connect some dots to trace where the real killing is happening. Dare I say a kind of genocide stares us in the face? Genocide is defined as the mass killing of a particular group of people. I have started to ask myself whether genocide is the first step towards mass murder or has a kind of mass murder already taken place before we experience genocide and the mangled bodies? I propose to you that multiple killings have preceded the horrors with which we now live. Those killings prepared the ground for the literal burial of our own people.

Three killings in particular are as real as the carnage we see when suicide vests are detonated: the death of morality, the death of truth and the death of reason. With such tragic exterminations, we now find ourselves in ever-present danger, constantly lectured to by those who have all the bodyguards they and their families need while the rest of us are sitting ducks for evil people whose rights are protected more than those of their slaughtered victims. Why is this happening? We are at war but not only with an enemy. We are at war within our own culture, and whether we will ever win over the enemy depends on whether we win this war within our own souls.

The Prince of Lawyers

At first, how I connect these dots may seem far-fetched, but they are indeed connected. Some time ago Robert Shapiro, the well-known lawyer of the famed O.J. Simpson trial, was being interviewed by Megyn Kelly of Fox News. She asked if justice had been served in that case. In a mind-stupefying, pathetic answer, he said, “There is legal justice and moral justice. Legal justice was served.” Maybe it was rightly called the trial of the century: We have entered the twenty-first century having amputated law from morality. Welcome to the uncivil civilization legalizing murder.

That an intelligent, educated, supposedly legal scholar can make a statement like that and think he has defended a noble cause is fatal to our culture. Maybe that’s why Shakespeare described Satan as “the prince of lawyers.” If that’s what legal theory espouses we are in great peril.

I have no doubt many an honorable lawyer cringed at that response but probably none was shocked. This is where law has drifted and come unhinged from any moral moorings. When justice is decapitated and something can be legal but immoral, we know we have already killed the heart of what it means to be human.

The morality of the beast is now normal. Is it any wonder that Nazi judges felt they were doing the “right thing” by upholding their legal prerogative that resulted in the death of millions? Our society is being dragged towards the morgue because the law has held the gun to the heart of morality.

Ironically, there was something in his response to be applauded. At least he granted there was such a thing as moral justice. So that leads to a deeper question: Should not Morality and Truth be inextricably bound together? That is at the heart of all judgments. What is the truth when a person is killed? But now, I dare say, not only does morality not matter, the truth doesn’t matter either. That has also been buried.

If you want a snapshot of our times, here it is: Four brave Americans serving their country murdered by a bunch of hate-filled thugs, whose ideology we are not allowed to identify, received and presided over by a litany of lies, their bodies draped in the national flag, while assurance is given to the bereaved that the culprits will be hunted down, including the one because of whom they were killed. If that scenario doesn’t drive us to our knees, Lord have mercy!

We are in the graveyard of a culture when a most somber moment cannot compel the conscience to tell the truth. Oh, that the victims could have sat up for just a moment and stared down that heinous lie! But it was not to be. One day it will be so as their blood cries out from the ground. As Malcolm Muggeridge said, “The lie is stuck like a fish bone in the throat of the handheld microphone. … Truth has died, not God.”

The noble thing to have done when that blunder was made was to admit a failure for whatever reason and ask for pardon, but not to bury the dead with a lie! As if it is not dark enough for a handful to tell a lie, even worse, in our culture today the lie is no longer a posture to be shunned. We celebrate power over truth, enshrouding the lie with our flag. That is a form of national murder. You see, a blunder is a momentary reality. Upholding a lie is a character flaw, sending that lie into eternity.

The death of morality, the death of truth; then we come to the last, the death of reason. Aristotle reminded us that the first law of logic is identity. We must identify what we are talking about. A particular identifiable characteristic is indispensable to the referent. We must identify the characteristics of the thing we define. That is necessary to understanding the thing and to resisting contradiction. But as destroyers enter our lands and desire to pillage and kill, we are led by rhetoric that kills the first law of logic, the law of identity.

We are told that identifying the enemy is not that important; strange that the same logic is not employed to all other local inimical ideologies but only seems to apply to Islam. Honest Muslims themselves wish to call it for what it is but our clever linguistic sleight of hand seems to restrict us from such identity — and so we bury our dead without identifying why the killer killed them.

We are sliding into the future with evil stalking us but no morality, no truth and no reason to guide us. America may be flirting with a self-inflicted mortal wound. Or it could well be a killing that is designed by a postmodern ideology masquerading as political correctness.

When liberalism, whose legitimate child is relativism, has played itself out it will be a Pyrrhic victory to find ourselves in the hands of those whose identity is no longer in doubt. And when they are in control, the very means they used to hide their identity will be silenced as well. They will preside over the last rites of politically correct enforcers and a “free press” that abused freedom and celebrated the lie ‘til they themselves were silenced, buried by the truth they never wanted to expose.

The One True Hope for Rescue

There always has been, and is now more than ever, only one hope for rescue. If we abide in God’s truth revealed in his Son, then we shall know the truth and the truth will set us free. That is why I say again and again that we must dispense with our verbal arsenal that speaks only in terms of right and left. We have forgotten there is an up and a down.

May God help us! We need His transforming power to change our thinking and to give us a hunger for what is true. True freedom is not in doing whatever we wish but in doing what we ought. That has been buried in America. And only one who knows the way out of the grave can give us a second chance to live: Jesus, the way, the truth and the life that sets us free from within first, before we learn to deal with the lies around us.

As my prayer for this July 4th, I think of the great hymn by Isaac Watts prayed often in moments of drastic transition. I have added a fourth verse for our times.

Our God, our Help in ages past,
Our Hope for years to come,
Our Shelter from the stormy blast,
And our eternal Home!

Under the shadow of Thy throne
Thy saints have dwelt secure;
Sufficient is Thine arm alone,
And our defense is sure.

Before the hills in order stood
Or earth received her frame,
From everlasting Thou art God,
To endless years the same.

We need thee now as ne’er before,
We mourn the wisdom gone;
Transform our land forevermore —
Redemption through your Son.