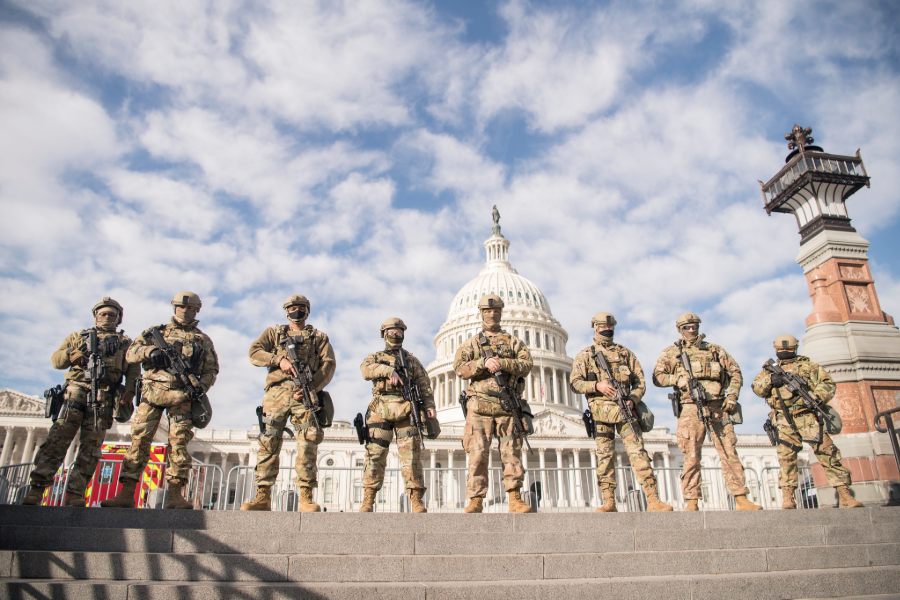 Visitors to the U.S. Capitol these days — and possibly, we’re told, even into the fall (!) — might think they are entering a police state when they see the thousands of National Guard troops and miles of tall fences topped with razor wire. Democrats don’t want the image of troops and fencing at the border, but it’s a fine look for our Capitol.

Washington D.C. would traditionally be so beautiful in the coming weeks with masses of cherry blossoms setting off the historic architecture, but this year it’ll look like an armed camp, and there’s just no legitimate reason for it. We’ve seen no evidence that the current threat level warrants this type of security, and we know the big military show is pure political gamesmanship. Indeed, there’s still much we don’t know about the security breach at the Capitol Building on January 6 that served as the pretext for this.

There’s Still Much We Don’t Know

Republicans on the Senate Homeland Security Committee, which is scheduled to hear testimony on Tuesday about safety precautions taken before the breach, sent letters on January 21 to those they wished to call as witnesses, including former U.S. Capitol Police Chief Steven Sund, former Senate Sergeant-at-Arms Michael Stenger, former House Sergeant-at-Arms Paul Irving, and Metropolitan Police Department acting chief Robert Contee III. But according to Republican Sen. Ron Johnson of Wisconsin, a member and former chairman of the committee, they have yet to hear back from either the former or active sergeants-at-arms in either the House or Senate.

Just as it was amidst allegations of election fraud,
the lack of transparency is astounding.

“It would be far better if we were having this hearing on Tuesday with a lot of … testimony from the people who were involved, other than just news accounts. Right now, we’re going to be going into that hearing with what we’ve read in the newspaper,” he told Maria Bartiromo Sunday morning on Fox News.

“We don’t have the base of information I would like to have before I would go into a hearing … I’m hoping we start getting some information from the people that were actually there and we get a full accounting of what actually happened,” Sen. Johnson said.

The problem he faces, as ranking member of the committee, is that Senate Democrats run the show (elections have consequences — right, Georgia?) and are dragging their feet. In fact, they didn’t even send their own letters out to prospective witnesses until February 4. So Johnson seems to be anticipating little from Tuesday’s hearing. He’s looking ahead to the follow-up hearing.

About the only response committee Republicans have had, he said, is a letter Steven Sund sent to House Speaker Nancy Pelosi, “detailing a lot of the actions he took.” The senator also said they need to resolve some conflicting accounts; for example, one division of the FBI got some “pretty disconcerting warnings” ahead of January 6, but in a briefing the same day, the FBI said there was “really no suspected harmful activity.”

Sen. Johnson said people were caught by surprise and that what happened was “not foreseeable.” Well, isn’t that what we have investigations to determine?

What about the part of the Democrats’ narrative that says this was an “armed insurrection”? Just as we have repeatedly said here, Sen. Johnson observed that the term “armed insurrection” misrepresents what happened. “The fact of the matter is,” he said, “when I hear ‘armed insurrection,’ I think of firearms.” (Doesn’t everybody??) The senator is “just asking the question, how many firearms were confiscated? How many shots were fired? I know of one [the one that killed Trump supporter Ashli Babbitt], and I’ll defend that law enforcement official.”

He continued: “One thing about conservatives — one thing about Republicans — is we are consistent in our condemnation of violence, of peaceful protests that turn into riots. We want to see those people who were involved in violent acts prosecuted to the full extent of the law. That’s not the same standard that the Democrats use,” he said, pointing out that they excused and even encouraged riots over the summer that caused $1-2 billion in property damage and an estimated 12-19 deaths. He noted that Vice President Kamala Harris even promoted donating to a fund that bailed out rioters.

“The double standard,” Johnson said, “the unequal enforcement of the law, is really what troubles an awful lot of people on our side of the aisle.”

So, shouldn’t Speaker Pelosi herself be called in any hearing about what happened on January 6? We say yes. After all, she was the one in charge of Capitol Hill security. She could have had as much security for this event as her little heart desired, but for some reason this only seemed important to her after the Capitol Building was breached. And now, the person she’s put in charge of her Capitol security “investigation,” retired Lt. Gen. Russell Honore, is as deeply partisan as they come; putting him in charge is no way to have an open investigation. I would say it’s not even possible.

Sen. Johnson agreed with our assessment, saying, “When it comes to Gen. Honore, I mean, take a look at his tweets, you take a look at what an extreme partisan he is … I don’t know the man [but] I think he’s the last person that ought to be heading any kind of investigation.” He said he and Lindsay Graham had called for a fair investigation that was completely independent of Congress, but “it’s difficult to figure out how to do that when you have a President that’s a Democrat and you have total control by a Congress of Democrats.”

Just as it was amidst allegations of election fraud, the lack of transparency is astounding.

Still, we already knew their strategy to be what Johnson said on Sunday: that the continuing military presence — 5,000 National Guard troops — and the miles of fencing topped with “concertina” wire “is really meant to create a narrative that 74 million Americans who supported and voted for President Trump are suspected domestic terrorists or possible armed insurrectionists that the Capitol needs to be protected against.”

That narrative is a lie. “I’m not aware of a heightened threat level now that the inauguration is over,” Johnson said. Ohio Rep. Mike Turner, in an appearance later in Maria’s show, said the military presence is “absolutely unnecessary,” and that the American public know it. Arkansas Sen. Tom Cotton, who sits on the Senate Intelligence Committee, is saying the same thing.

So, yes, the cherry trees are about to bloom in D.C., and the Democrats are out of their blooming minds. (Too late to nip that in the bud.) And their false narrative will be reinforced at every turn. For an example, I’ll leave you with this commentary on legal double standards by the great Miranda Devine at the New York Post, who reports that on Monday, the opening day of his confirmation hearing, Biden’s attorney general nominee Merrick Garland will say he plans to personally supervise the persecution of the “white supremacists” who stormed the Capitol. I’m pretty sure he means Trump supporters.