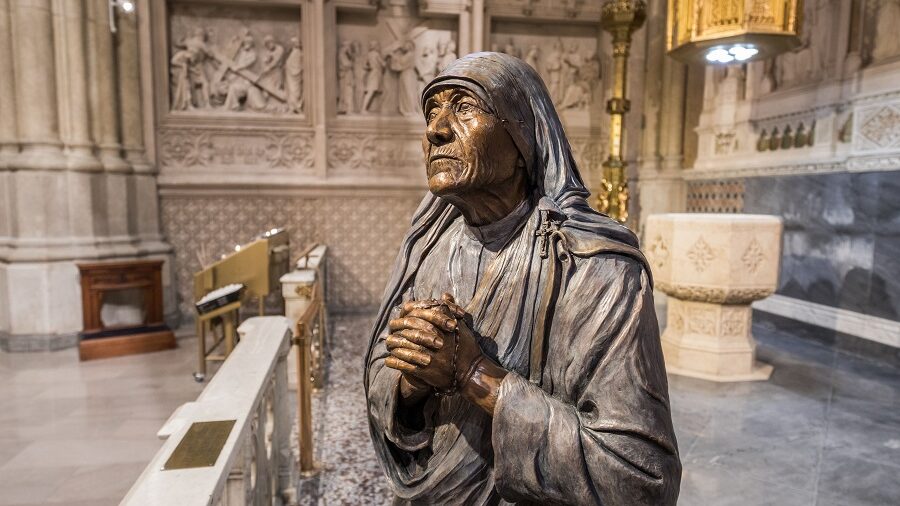 “If a mother can kill her own child, what is there to stop others from killing one another?”

Well, I guess those are fighting words today. But the speaker was hardly controversial at one time: Nobel Peace Prize winner and canonized saint Mother Teresa of Calcutta. But even saints aren’t safe these days.

The New York Times recently published an op/ed with the headline “Was Mother Teresa a Cult Leader?” about a recent documentary that depicts a missionary group that Mother Teresa founded “as a hive of psychological abuse and coercion. It raises the question of whether the difference between a strict monastic community and a cult lies simply in the social acceptability of the operative faith.”

We shouldn’t think of saints as perfect. Or as weirdos. They actually aren’t as exotic as we make them out to be. They are people who, by surrendering to God and His supernatural grace, displayed heroic virtue and truly lived the message of the Gospels. That’s certainly not supposed to be a rarity.

I can’t tell you that psychiatrists would agree with everything that missionary groups like the one founded by Mother Teresa do. Or medical doctors, for that matter. They care for people — probably without social distancing now and again during COVID-19. But we need people like that. We need prudence, but sometimes we need people willing to completely embrace the suffering, both physically and mentally. COVID-19 isn’t our only pandemic.

People feeling alone, even in the uber-connectedness — that’s devastating in ways we don’t always recognize. Religious workers reach out to people cast aside. We need more people like them, not fewer.

Religious community life requires extreme obedience and humility. That’s a foreign concept in our modern era, but it also makes room for tremendous charity, something our society could certainly use much more of. There is a beauty to it that is foreign to us. But perhaps instead of attacking it, we might see what we can learn from Mother Teresa’s Missionaries of Charity and other groups like it, such as my beloved New York friends, the Sisters of Life.

“If today there is so much suffering in the world, so much pain, it is because the child — the unborn child, the innocent child — is unwanted, unloved, uncared for,” Mother Teresa said. Again, that’s quite a loaded statement in today’s wretchedly polarized politics. But could it simply be a challenge? Pro-life or pro-choice — can’t we agree with her here?

Mother Teresa’s words above were about way more than abortion — though abortion was certainly part of it. A recent court ruling seems to make it next to impossible to talk to a young girl or woman walking into an abortion clinic. Why not allow for real choice? There’s nothing like informed consent happening in many places today when a scared teenager walks in for an abortion. And what about all the 400,000+ children in foster care? Isn’t it possible that all the violence we see today has to do with our callousness and ignorance and indifference on these fronts? Instead of attacking Mother Teresa — or dismissing her — we’d be better off if we learned from her.

Thanks be to God she is praying for us. We clearly need the help.