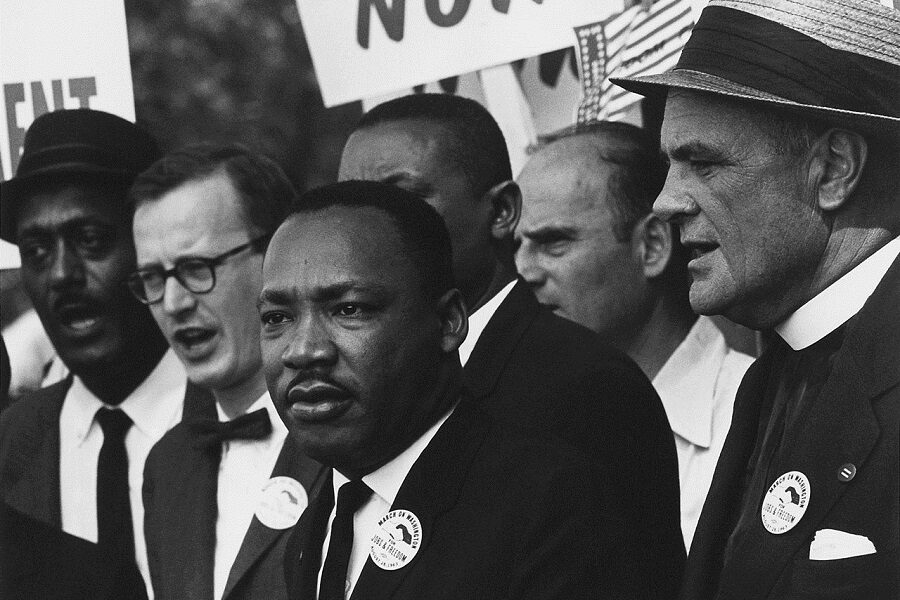 Martin Luther King Jr. during the 1963 March on Washington for Jobs and Freedom, during which he delivered his historic "I Have a Dream" speech, calling for an end to racism.

We live in a time when lawn signs tell us that lives matter. The isolation and fear of these pandemic times has led to an increase in suicide. People feel beaten down, worthless. Society in no little part has been built to keep people feeling that way. But our lives matter and our suffering, however profoundly unjust, matters. We work for justice, but need mercy. Martin Luther King Jr. gets invoked often; his words on suffering are needed.

He wrote: “A person who constantly calls attention to his trials and sufferings is in danger of developing a martyr complex and of making others feel that he is consciously seeking sympathy. It is possible for one to be self-centered in his self-denial and self-righteous in his self-sacrifice. So I am always reluctant to refer to my personal sacrifices. But I feel somewhat justified in mentioning them … because of the influence they have had in shaping my thinking.”

King’s humility here is so worth revisiting. We all suffer. It’s part of the human condition in a fallen world. We may know our suffering, but we may not know our neighbor’s. We may be indifferent or worse to the troubles of others. I often wonder how much of the anger in our country could be alleviated by a little appreciation for the fact that most of us are suffering, some worse than others. Think of all the people we judge and become angry at on the internet. Think of all the people we tend to think of as “other,” as different and somehow less worthy than us.

King’s troubles, of course, were far worse than those of most of us. He wrote: “I have been arrested five times and put in Alabama jails. My home has been bombed twice. A day seldom passes that my family and I are not the recipients of threats of death. I have been the victim of a near-fatal stabbing.” Ultimately, he was assassinated for his beliefs and actions.

He was so honest: “I must admit that at times I have felt that I could no longer bear such a heavy burden, and have been tempted to retreat to a more quiet and serene life. But every time such a temptation appeared, something came to strengthen and sustain my determination. I have learned now that the Master’s burden is light precisely when we take his yoke upon us.”

An Invitation From God

King could have said “woe is me” or could have seen himself as civil rights savior, but instead he saw an invitation from God to come to know Him better. He wrote: “My personal trials have also taught me the value of unmerited suffering. As my sufferings mounted I soon realized that there were two ways that I could respond to my situation: either to react with bitterness or seek to transform the suffering into a creative force. I decided to follow the latter course.”

And this insight might be key — it presents a concept so foreign to us and our culture today: “Recognizing the necessity for suffering I have tried to make of it a virtue. If only to save myself from bitterness, I have attempted to see my personal ordeals as an opportunity to transform myself and heal the people involved in the tragic situation which now obtains. I have lived these last few years with the conviction that unearned suffering is redemptive.”

He went on to explicitly declare that his suffering brought him closer to God. “There are some who still find the cross a stumbling block, and others consider it foolishness, but I am more convinced than ever before that it is the power of God unto social and individual salvation.”

Our politics is overflowing with bitterness, on all sides. People feel persecuted. People feel overwhelmed. People are bitter, and for understandable reasons in many cases. And the media can tend to exacerbate the bitterness, even with the best intentions. But those who choose to fight through it for a radical kind of love will be the leaders in virtue we need, now and in the future.