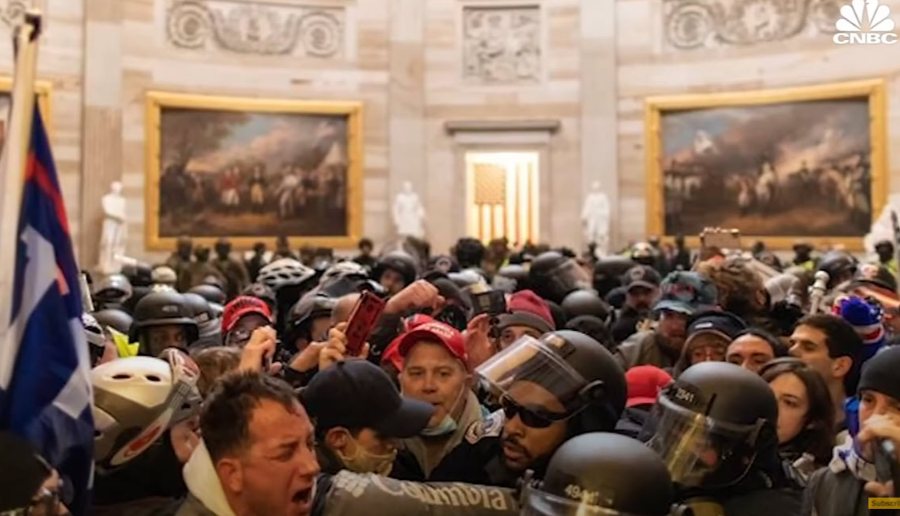 On the morning of Jan. 5, a best-selling Christian author posted a picture of the Egyptian Coptic martyrs who were beheaded on a beach in Libya in 2015. Above the photo, the author asked: “What price are you willing to pay for what you believe in?”

That’s an excellent question I ask myself often. I’d like to think I would have the courage to die for Christ. But to die for Donald Trump? Because that was certainly how people who saw the tweet interpreted it, given what happened the next day in our nation’s capital, and the many, many tweets about it.

January 6, of course, was the day Congress was set to certify the Electoral College vote for the next president. Usually a mere formality, this year it turned into something far uglier, as we all saw unfold on our screens.

The Copts Who Were Killed for Jesus

The Copts who were beheaded that morning six years ago died for Jesus Christ. They trusted God so much that they knew that by refusing to convert to Islam at point of a sword, they would go home to God for eternity. One of the amazing details of the story is that one man among the 21 was not a Christian. But upon being given the choice of life in a world of ISIS terrorists or death with the Christians, he chose the latter.

I know it’s a big, complicated world full of evil and corruption, but the Trump administration did not make a convincing case that there was election-flipping evidence of fraud — the reason that supposedly drove the so-called patriots to riot in the Capitol. I understand how frustrating politics can be, and as a person who opposes abortion and treasures religious liberty, I’m very worried about a Biden-Harris administration. But I also still believe this country’s Founding Fathers were on to something when they laid the foundations of our system of government.

While there were Christian signs and words at the rally that preceded the riot, it’s hard to escape the thought that some of the people there had made an idol of Donald Trump. Idolatry in politics is a bipartisan problem. As Barack Obama said: “We are the ones we have been waiting for.” No, all of human history hasn’t been waiting for any political candidate. God provides, and He knows what He is about. This moment in history requires universal humility and an examination of conscience.

I had a sick feeling as I watched the president’s rally on television. One of the defenses Trump supporters made in the hours after Congress was cleared of danger is that the president didn’t say anything he hadn’t already said, that it was a typical rally. And there is truth to that. But this, of course, was the one rally that was the end of the line for a presidency Trump wouldn’t let go of.

“We will never give up. We will never concede. … Our country has had enough. We will not take it anymore, and that is what this is all about,” Trump said. If I believed the election was stolen and clearly no one could be trusted, I might have stormed the Capitol, too.

When a protest becomes a mob, we are in different territory. We did see this over the summer when protests over police brutality and racism destroyed businesses. With the Trump rioters, we had the ransacking of the United States Capitol. Can’t we all collectively say this has gone way too far?

People are frustrated. They are fed up. Trump didn’t start that fire, but he did kindle the flames. If Joe Biden is going to succeed in his presidency, he’s going to have to respect this frustration — though certainly not the violence. I wasn’t there, but from reports and experience, the vast majority of the people at that Trump rally were peaceful. Many were locals. President-elect Biden must make a pitch to be their president too. I fear what’s to come if he doesn’t.

More to Life Than Who the President is

We need to remember like the Founders that there is more than our earthly reality. There’s more to life — and our nation— than who the president is. Remember the humility of the martyrs. They certainly were not dying for Donald Trump or Joe Biden.