Part three of our five-part series "Born on Christmas Day" 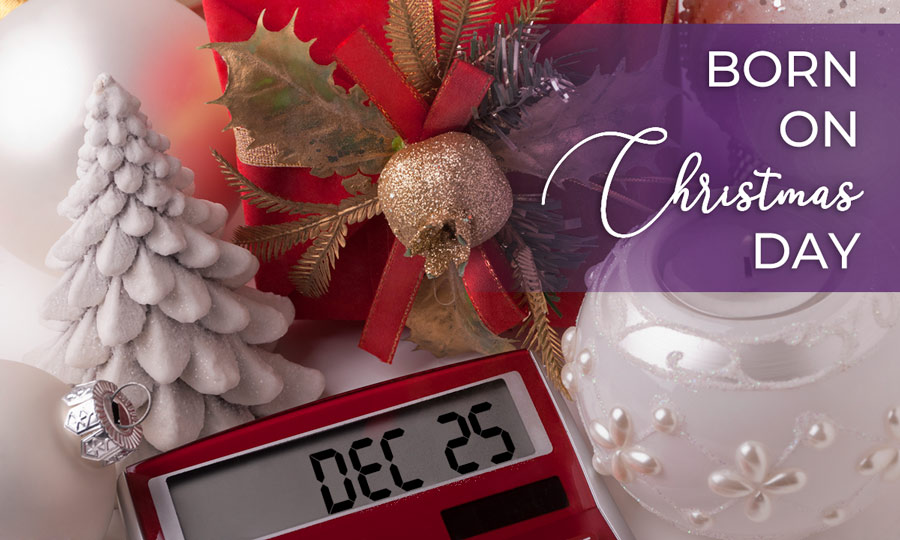 One of the arguments that is used to say 4th century Christians adopted the pagan Sol Invictus festival for Christmas is that earlier Christians did not celebrate birthdays of biblical heroes. They commemorated deaths.

Now comes the great twist in our journey: It is precisely because they commemorated deaths that early Christians began identifying December 25 as the date of the Nativity.

Welcome to what’s called the “Calculations Theory.” William J. Tighe published a mind-blowing and easy-to-follow article about it for Touchstone magazine in 2003.

Here’s the theory in a nutshell: The early Christians, like their Hebrew forefathers, commemorated the deaths of their heroes and martyrs. Naturally, the early Christians were very concerned about pinpointing the precise date of Jesus’ crucifixion.

Although there was some disagreement, generally speaking, a consensus formed that Jesus died on March 25.

Now, as Tighe writes, there was another ancient Hebrew belief: Great men died on the anniversary of their conception. The early Christians held to this idea, particularly since they held that Jesus lived a perfect and complete life.

So if Jesus died on March 25, the Incarnation would have been on March 25. Since the gospels give every indication Mary had a normal length pregnancy, what’s nine months from March 25? December 25.

Sure, there are issues with this approach. For example, we today would reject the idea of dying on the exact day you were conceived. It’s more a theological idea than a biological one. Also, there’s no way to prove Mary carried the Christ child exactly nine months.

However, right now, declaring Jesus was actually born December 25 is not our task at hand. Our task to show that a December 25 date marking Jesus’ birth not only came about independent from the pagan Sol Invictus festival, but predates it.

Remember, the Sol Invictus festival was inaugurated in 274 A.D. So what we’re looking for is evidence of Christians identifying December 25 before that. Sure enough, we get it.

Perhaps even earlier, 2nd and 3rd century Christian theologian Hippolytus of Rome in his “Commentary on Daniel” stated the Nativity occurred December 25. From an entry in Encyclopedia Roma titled “Sol Invictus and Christmas”:

And, although the statement may be a later interpolation, he (Hippolytus) reiterated several decades later (in AD 235) that Jesus was born nine months after the anniversary of the creation of the world, which Hippolytus believed to have been on March 25 (Chronicon, 686ff). The Nativity thus would be on December 25.

Meanwhile, Tighe also beats the magic year of 274 A.D. With a vengeance. He details how assorted groups in the eastern and western churches wrestled to determine a date for Jesus’ crucifixion. He shows that Latin Christians in Rome and North Africa, by the time of early church leader Tertullian had fixed on Friday, March 25, 29 A.D. That March 25, 29 A.D. wasn’t actually a Friday, is beside the point. The point is Tertullian lived from 155-220 A.D.

In fact, Tighe argues Aurelian pinched December 25 from the Christians!

The pagan feast which the Emperor Aurelian instituted on that date in the year 274 was not only an effort to use the winter solstice to make a political statement, but also almost certain an attempt to give a pagan significance to a date already of importance to Roman Christians.

The Light Rises Upon You

Yes, says Andrew McGowan, some early church writers did make a connection between the winter solstice and Jesus’ birth, as the pagans did with Sol Invictus. For example, the early church father Ambrose described Jesus as the true sun that outshined the fallen gods of the old order.

But, says McGowan, “early Christian writers never hint at any recent calendrical engineering; they clearly don’t think the date was chosen by the church. Rather they see the coincidence as a providential sign, as natural proof that God had selected Jesus over the false pagan gods.”

John Seldon was a 17th century member of Parliament, and one of the most learned men of his time. When the argument started to be made that Christmas was of pagan origins, he came to Christianity’s defense. He showed that due to problems with the Julian calendar, an ancient tie was lost. The winter solstice in the Julian calendar was December 25. And, he argued, the tie between the winter solstice and Christ’s birth, in fact, goes back to the apostles.

Ultimately, we don’t need 17th century British parliamentarians to make our case. We need only the Old Testament prophet Malachi.

In a work attributed to church father Cyprian published in 243 A.D, we find this:

O how admirable and divine is the providence of the Lord, that on that day on which the sun was made on the same day was Christ born … and so rightly did the prophet Malachi say to the people: ‘the sun of righteousness shall rise upon you, with healing in his wings.’” (Malachi 2:4)

Our journey these past three days has taken us through pagan territory, Hebrew tradition, early church fathers, mind-bending calculations and the winter solstice. Let’s assess the trip thus far:

It is certainly natural to see the winter solstice, the returning of light, as a symbol of Jesus’ birth. We can see how this partners beautifully with calculations of Jesus’ death and Inception occurring on March 25, nine months before December 25. We have enough evidence that this connection of Christ’s Nativity to December 25 far predates Sol Invictus — that Christians were already starting to commemorate the Nativity on December 25 before Aurelian created the pagan festival — to conclude the Christmas tradition was at worst emerging in parallel. And at best was becoming popular enough that Aurelian attempted to give the Jesus commemoration a pagan overhaul.

And yet, does this mean Jesus was actually born on Christmas Day, December 25th? Is it possible to make that case at all?

That’s our next stop.

Up tomorrow: “So Jesus Was Born on December 25 After All?” See the full series here.