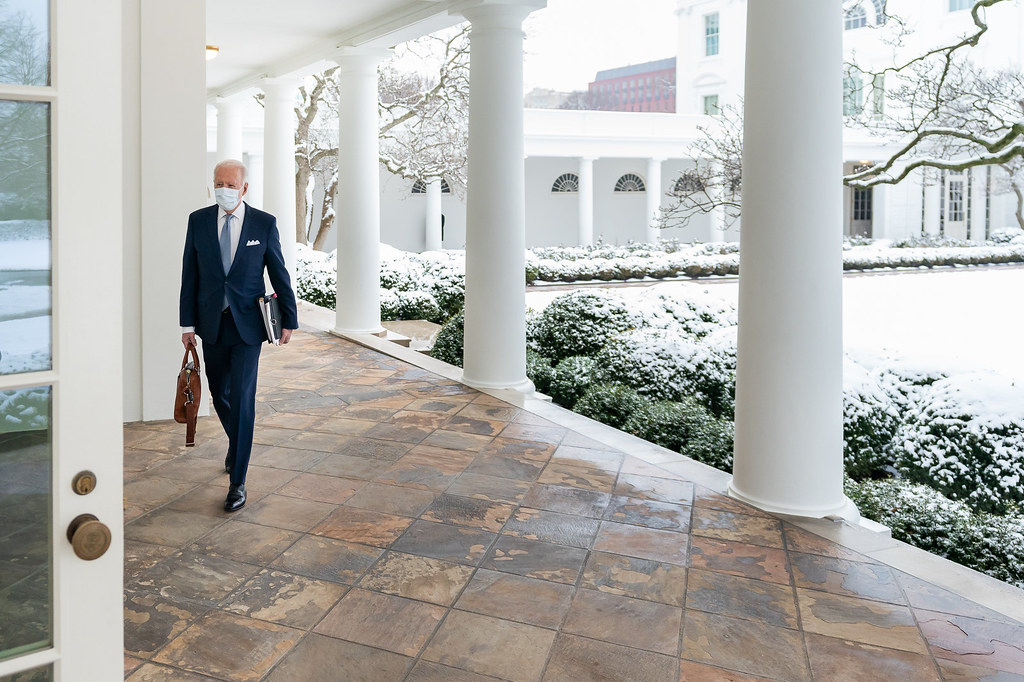 A blanket of snow covers the Rose Garden of the White House Monday, Feb. 1, 2021, as President Joe Biden walks along the Colonnade to the Oval Office.

The Washington Post on March 7 published a column in which E.J. Dionne Jr. contended that President Joe Biden is “rolling back the politics of culture wars.”

If you’ve read even a fraction of Biden’s executive orders, memoranda, and proclamations, Dionne’s assertion will strike you as bizarrely divorced from reality.

If you expected Dionne, a Georgetown professor and Brookings Institution fellow, to address Biden’s unilateral actions and explain how they do not, in fact, advance the culture wars, you would be disappointed.

Dionne doesn’t mention a single one.

So, let’s go through them all and see whether Dionne’s premise holds. Is Biden, in fact, rolling back the culture wars?

Biden’s first executive order directs the entire federal government to adopt an “equity agenda” and to “embed equity principles, policies, and approaches across the Federal Government.”

Equity is a nice-sounding word, but it’s actually a masquerade for government-mandated inequality, and it’s on the frontlines of the culture wars.

Wherever you see “equity,” you’ll see Lady Justice without her blindfold and a government denying the people equal treatment under the law.

A Flood of Executive Orders to Inflame the Culture Wars

Besides requiring the entire government to commit to an “equity agenda,” Biden has further inflamed the culture wars in more than two dozen other executive actions. And we’re less than two months into his presidency.

One executive order directs all administrative agencies to apply the Supreme Court’s Bostock decision to all laws under their purview. In Bostock, the Supreme Court reinterpreted Title VII, which prohibits employment discrimination on the basis of sex, to include transgender status and sexual orientation.

Under Biden’s order, the government will apply this new definition to all federal laws and regulations.

That includes Title IX, which covers education, meaning that schools receiving federal funds will be forced, among other things, to allow biological males who “identify” as female to play on girls sports teams.

And just to make it extra clear that sex-specific sports teams and bathrooms are not permissible, Biden issued a separate order about Title IX, just in case anyone might have missed it.

Using COVID as a Weapon in the Culture War

Biden also has made the government’s COVID-19 response a key culture war battleground.

One executive order makes “racial and ethnic disparities” the government’s first priority in responding to COVID-19.

Another expands on that point, creating a Health Equity Task Force to address how the government can use its COVID-19 response to combat “systemic and structural racism,” calling it “a moral imperative.”

Yet another order requires the government to expand “equitable” access to COVID-19 testing.

Still another directs the Department of Labor to direct its Occupation Safety and Health Administration enforcement efforts, in the context of COVID-19, to “ensure equity.”

That order also directs the Labor Department to “place a special emphasis on communities hardest hit by the pandemic”— in other words, racial and ethnic minorities.

An order that ostensibly encourages the reopening of schools directs the Department of Education to report on COVID-19’s “disparate impacts” on racial minorities and requires that all data gathered by the Institute of Education Sciences be “disaggregated by student demographics, including race, ethnicity, disability, English-language learner status” and more.

Two more pandemic-related actions direct agencies to limit travel into the country, and to ban travel from certain specific countries while, at the same time, Biden allows illegal immigrants to stream across the southern border despite the risk of increased transmission of COVID-19.

And on the subject of the border, despite a mounting crisis, Biden issued a proclamation declaring a formal end to the emergency there.

Getting tired?  We’re only halfway through Biden’s executive actions issued to date.

One executive order bemoans that the government has failed to “advance environmental justice” and directs the government to adopt a climate policy that focuses on “intergenerational equity.”

Another order blocks the Department of Commerce from asking whether respondents to the decennial census are citizens and maintains that congressional apportionment should include illegal aliens.

Yet another makes sanctuary cities eligible for federal grants. And another calls Trump’s travel ban “a moral blight” and “a stain on our national conscience,” and rescinds it without any substantive discussion of national security.

Still another directs the government — without any outreach to or input from Congress — to “fortify” the Deferred Action for Childhood Arrivals program.

Moving on, one of Biden’s executive orders directs the military to allow transgender individuals to serve openly and allows people to change genders while in the military on the military’s dime.

Biden also issued a memorandum complaining that the federal government has “played a role” in furthering “xenophobic rhetoric” that puts Asian Americans at risk by, for example, referring to the fact that COVID-19 originated in China. Those statements, Biden asserts — without evidence — have led to hate crimes against Asian Americans.

The memo also directs the secretary of the Department of Health and Human Services and the COVID-19 Health Equity Task Force to “consider issuing guidance describing best practices for advancing cultural competency” in the context of the government’s pandemic response.

Another order directs the departments of State and Homeland Security to consider eliminating “barriers” to the naturalization process, such as “fingerprinting, background and security checks, interviews, civics and English language tests, and the oath of allegiance.”

Biden, it seems, thinks that studying American history, learning about our Constitution, or pledging their allegiance are obstacles to new citizens.

Another memo directs the State Department to resume funding nongovernmental organizations that provide or lobby for abortions in foreign countries.

Having gone several days without focusing the government on “equity,” Biden issued a memo directing the newly created Task Force on Scientific Integrity to publish a report on “scientific integrity of diversity, equity, and inclusion practices” in the federal scientific and engineering workforce.

It also directs heads of agencies to support their “evidence-based policies” with “scientific-integrity policies.”

Biden has created a bunch of new councils and task forces to push equity initiatives.

Another executive order creates a Council of Advisors on Science and Technology that will advise Biden about, among other things, “racial equity.”

Similarly, another order creates an Environmental Justice Advisory Council that will provide Biden with recommendations to deal with “historic environmental justice.” That order creates a separate Office of Climate Change and Health Equity, along with a National Climate Task Force to coordinate the whole government’s equity-based response to climate issues.

Another panel, the Gender Policy Council is built on the premise that “gender equity” is “a matter of human rights, justice, and fairness.”

Race to Use Race

One memo directs the government to redress “systemic racism” in housing, while another directs all executive agencies to focus on LGBTQI issues in foreign relations and policy.

Meanwhile, Biden issued a proclamation for Black History Month lamenting that “[w]e have never fully lived up to the founding principles of this Nation” because “systemic racism” continues to “plague” the country.

All of this Biden has done in less than two months in office.

Two takeaways from all of this: First, contrary to Dionne’s claim, Biden is not “rolling back” the culture wars; to the contrary, he has poured gasoline on the fire. And second, if Georgetown and Brookings are paying Dionne to do research, they’re not getting their money’s worth.

If, however, they’re paying him to ignore inconvenient facts in order to spin a narrative, then he deserves a raise and a promotion.

GianCarlo Canaparo is a legal fellow in the Edwin Meese III Center for Legal and Judicial Studies at The Heritage Foundation.