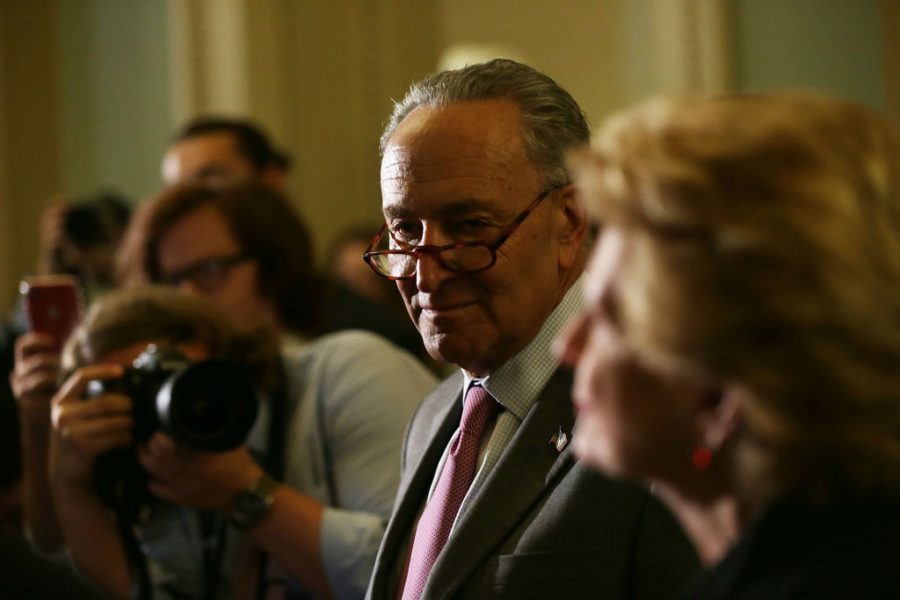 Who would have guessed that the proper response to white supremacists marching in Charlottesville was to encourage election fraud? At least, that’s the position taken by congressional Democrats. They apparently have forgotten the lessons of their party’s Jim Crow laws, poll taxes and the like.

The good news out of Charlottesville is how few people turned out for a supposedly national rally and the lack of public support for neo-Nazis and their ilk. The marchers discredited themselves, but played the victim card after left-wing protestors turned to violence.

We all know America is not perfect. But thankfully our country is very different today from what it was 50 or 100 years ago.

Rather than emphasize the positive, Democratic lawmakers seek political advantage. And perhaps none more than Senate Minority Leader Chuck Schumer. He desperately wants to displace Sen. Mitch McConnell as Majority Leader and probably has the White House in his sights.

So, after Charlottesville, Sen. Schumer declared that “we need more than just words — we also need action.” What might that be? “It’s time to end the assault on voting rights,” meaning get rid of the Election Integrity Commission, on which I serve.

And if the president doesn’t do so, Democrats will attempt to attach an amendment to a “must-pass” piece of legislation, Sen. Schumer threatened. Of course, for that tactic to succeed, some Republicans would have to abandon their party.

Sen. Schumer’s demand is partisan politics at its most pure. The Commission is advisory and has no power to affect anyone’s voting rights. It cannot cancel one registration. It cannot order any state to do anything. All it can do is gather information, analyze issues and propose solutions.

The senator’s threat to shut down the panel is nothing more than an attempt to hide the truth about the state of our electoral process. Ignorance about the potential for vote fraud isn’t in anyone’s interest, except for those who benefit from it. The fact is, every name on a voter registration list can be voted — either legally by the individual or illegally by someone else.

Voter rolls bulge with the names of people who have moved away or died. The American Civil Rights Union (ACRU), which is leading the legal fight for accurate voter lists, sued Broward County, Florida for allowing its rolls to become a valuable tool for vote fraudsters. At last month’s U.S. district court trial it was revealed that Broward’s voter rolls contained more than 3,000 registered voters at least 100 years old including 48 who were older than the oldest living American (who is 113 years old) and a few who topped 130 years old.

Sen. Schumer and his colleagues know vote fraud occurs and they believe it is to their advantage.

Independent researchers report that hundreds of thousands if not millions of noncitizens are registered to vote across the nation. The opportunity for electoral theft is great and that should concern every American.

The real civil rights violation at issue here is the potential devaluation of citizens’ votes. If there’s really no vote fraud problem, as Democratic leaders insist, then let’s establish that fact once and for all.

So, why kill the commission? The obvious answer is that Sen. Schumer and his colleagues know vote fraud occurs and they believe it is to their advantage. Their defamatory attacks on anyone who raises the issue only make them look guilty. Why else defend the indefensible if there’s nothing to hide?

The Victims of Voter Crime

Vote fraud is not a victimless crime. It most hurts Americans whose primary political involvement is their ballot. People who have big money to give — the sort of people who fund Sen. Schumer’s campaigns — might not care much about voting. But for the rest of us it is the essence of citizenship.

Every illegal ballot cast dilutes the political voice of an American citizen. Vote fraud is an assault on the most fundamental responsibility of citizenship. The right of people to freely and fairly choose their rulers is the essence of democracy.

Every illegal ballot cast dilutes the political voice of an American citizen.

But democracy works only if all sides accept the possibility of losing. The importance of keeping votes honest is shared by everyone. Vote fraud is an attack on all.

Democrats should be particularly sensitive about condoning anything that smacks of electoral cheating. The ACRU’s “The Truth about Jim Crow” details the U.S. history that Sen. Schumer would like to forget: “Jim Crow was dehumanizing; Jim Crow was deadly; Jim Crow was Democratic.” It was solely the senator’s party that engaged in systematic discrimination against the freedmen, which was based on electoral fraud: keeping the former slaves from the polls and making sure their votes didn’t count.

No doubt, the distinguished senior senator from New York would be outraged if accused of seeking to revive Jim Crow. But his dismissal of the importance of election integrity is a reminder of the ugly era when his party’s white supremacists cheated away the votes of minorities.

Today, Sen. Schumer wants to shut down the Election Integrity Commission to perpetuate the myth that there is no vote fraud. Americans deserve the truth about the integrity of our election process as well as the truth about our history of civil rights.

Kenneth Blackwell, a former mayor of Cincinnati and a current member of the Presidential Advisory Commission on Election Integrity, is a Policy Board member and Senior Fellow for the American Civil Rights Union.