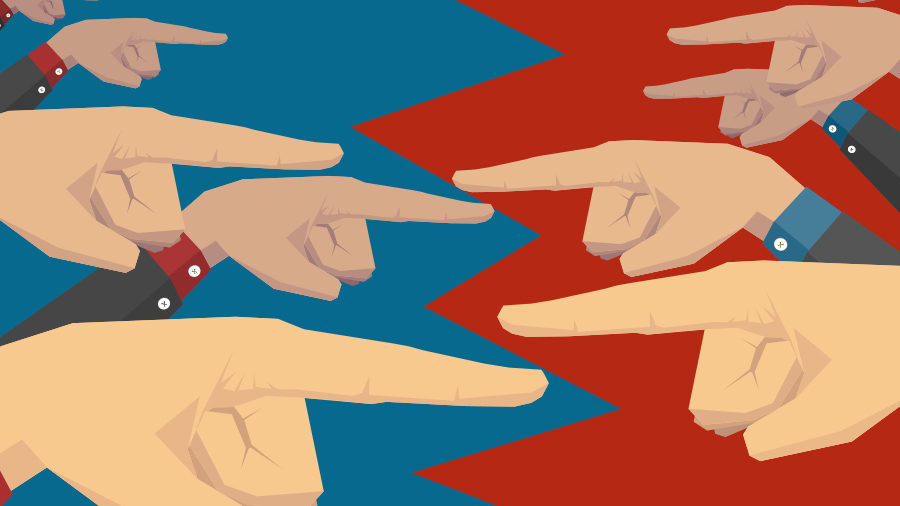 The left-right divide in America is, unfortunately, unbridgeable.

There are three reasons.

First, we are divided by our vision of what we want America to be.

The right believes the founders’ vision was brilliant and moral, that bourgeois middle-class values are superior to alternative value systems; that rights come from God, not man; and that the state must be as small as possible. The left (not liberals) shares none of those values.

Second, we are divided by the means we use to achieve our vision. Given their different ends, left and right obviously differ on what means to use to achieve their ends.

Third, and perhaps most troubling, there is a reality-perception divide.

Left and right have different perceptions of reality.

They Proved My Point

I have been aware of this for many years, but it was dramatically brought home last week when I was a guest on Real Time With Bill Maher. Given that the other two guests on the panel and more or less the entire studio audience were on the left, their reactions to what I said proved my point.

For example, I said that though there are, of course, racists in the United States, America is the least racist multiethnic and multiracial country in the world.

I said the United States military has brought so much liberty to the world it deserves the Nobel Peace Prize.

Clearly, there is an unbridgeable divide in the way we perceive the reality of the American military’s role in the world.

I said that it turned out the Russia-Trump campaign collusion never happened.

There is an unbridgeable divide in the way left and right perceive this reality.

I said the Trump-Ukrainian president phone transcript did not show a quid pro quo.

I was booed, and one of the other panelists said it actually showed “extortion.”

This, too, constitutes an unbridgeable divide between the way left and right view reality.

I said John Brennan, the former CIA director, has voted communist. (He has admitted that he voted for the Communist Party USA presidential candidate Gus Hall in 1976.) I was dismissed as having made something up. Bill Maher sarcastically responded that he didn’t recall Mao having been on any ballot.

And I said that people on the left say men can menstruate.

For that, I was not merely booed; I was laughed at by the panel, Maher and the audience.

Anyone can Google this and learn that I was entirely right. Just type “can men menstruate.” One of the first results will be from the popular left-wing website The Daily Beast: “Yes, Men Can Have Periods and We Need to Talk About Them,” reads one of its headlines. “How is this possible?” you might ask. Well, if a woman declares herself to be a man, then “a man” can have a period. In fact, last month, Procter & Gamble announced that it will remove the female Venus symbol from its Always line of menstrual products. After all, not only women menstruate.

On each of these issues — all the issues for which I was booed — right and left have different perceptions of reality. That — even more so than differing values — makes the left-right divide unbridgeable. When you cannot agree on what is real, there is no possible bridging of the gulf.

What the Left Believes

The left believes the president colluded with Russia to win the 2016 election. The reality is that there was no collusion. This is the conclusion of the Mueller report, but still, the left doesn’t accept it.

The left is certain President Trump said the neo-Nazis are “very fine people” when referring to the protesters in Charlottesville, Virginia. The right is certain the president didn’t say there are good neo-Nazis any more than he said there are good “Antifa” members. When he said there were “very fine people on both sides,” he was referring to those demonstrating on behalf of keeping Confederate statues and those opposed. See “The Charlottesville Lie” by CNN analyst Steve Cortes.

The left believes socialism is economically superior to capitalism. But the reality is that only capitalism has lifted billions of people out of poverty. This is, therefore, not an opinion divide — “You prefer capitalism. I prefer socialism” — but a reality divide.

The reason this is so frightening is that it means one side has lost its grip on reality. If half of this country cannot distinguish truth from falsehood, that is not a good sign for the nation’s future. On that point, ironically, left and right can agree.